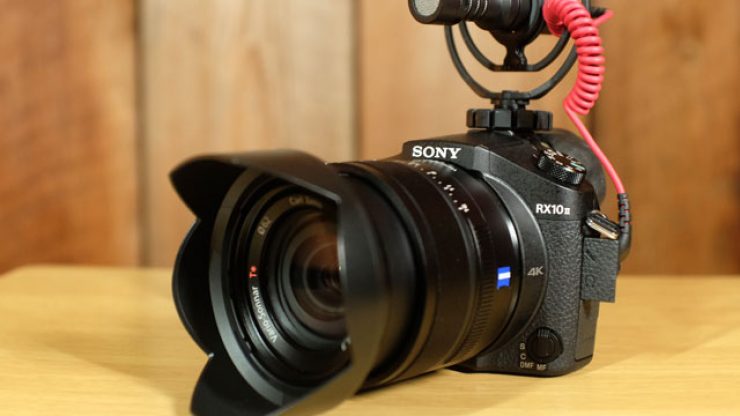 In a recent Newsshooter post I tested the Canon XC10 from the perspective of simple, everyday video journalism. Is it currently the best solution for video producers who aren’t ready or interested in shooting on larger, more complex rigs? The XC10 has some things going for it, but it also falls short for many potential buyers. Coincidentally, at around the same time the XC10 came out earlier this year Sony released the RX10 mark II, a very similar camera but at half the cost.

So how does the RX10 II stack up against the XC10? In some ways it’s a big improvement in usability and overall value, but in other ways (read: image stabilization) it fails miserably.

I primarily use Canon C100 cameras for paid shoots (though I have a Sony FS5 on the way), but I also conduct video production training sessions for radio and web journalists who want to produce video. For these documentary producers with only a moderate amount of camera knowledge, I’d like to give them something simpler than a C100 to work with, a small and lightweight camera that still has professional features such as high quality audio recording. With that goal in mind, I went out and bought an RX10 II, hoping it would come through where the XC10 lacked. 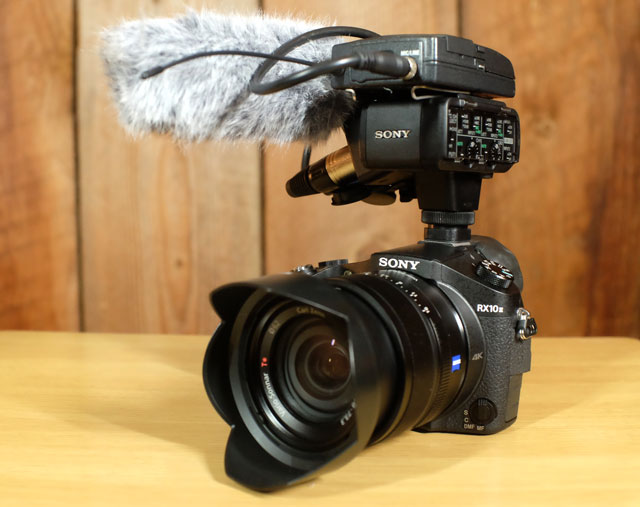 The audio input is the big advantage Sony has over the Canon XC10. For everyday B-roll shooting, the very affordable Rode VideoMicro fits perfectly on the RX10. But for more complex shoots, you can add the $600 XLR-K2M accessory that provides phantom power and individual levels for two audio channels. It’s powered by the hotshoe, so there’s no separate batteries to worry about (compared to a Beachtek or Juicedlink preamps), and it’s shaped in a way that a wireless receiver can sit snugly on top. The XLR-K2m comes with a shotgun mic, but you can use your own, which is a big plus for radio journalists who have invested in expensive microphones. Lastly, the on-screen audio levels are easy to read on both the LCD and the viewfinder screen. The RX10 wins this round.

Focusing is somewhat easier on the RX10, but it’s still frustrating to use. The XC10 has a long and slow electronic focus throw, often requiring several rotations all the way around to focus from foreground to background. The RX10 is happily faster in this regard, but it’s still electronic and laggy. Peaking helps, but sometimes doesn’t show even on clearly in-focus areas. And autofocus is just too slow to depend on. Still, the RX10 wins for its speedier manual focus.

As for exposure changes, the RX10 has something that I wish every camera on earth had: a wheel for changing ISO (!). With that, plus the aperture lens ring, another wheel for shutter speed, and a fairly easy to access White Balance setting, this camera becomes a lot easier to use than the XC10’s frustrating menu system. Below is my custom layout for buttons, and I still have a couple empty buttons to add more shortcuts. RX10 wins for ease of use.

Although you can’t use the LCD and EVF at the same time, assigning a custom button to switch between them is not an issue. I prefer the EVF because it has a sliding exposure meter at the bottom of the screen, whereas the LCD does not.

A couple other positives for the RX10: the SDXC cards are currently much cheaper than Canon XC10’s CFast requirement for 4k shooting. The S-log2 image is a little flatter and duller than Canon’s C-log, but overall pleasing in both indoors and outdoors. The built-in ND filter is a necessary feature and shares the same 3-stop ND as the XC10. And finally, the 24-200mm f/2.8 constant aperture lens is a good range for everyday use.

But alas, the negatives tend to outweigh any positives. That electronic zoom is slow, clunky (it wobbles as it zooms), noisy, and overall less fun to use than Canon’s XC10 lens. Operating an electronic zoom in conjunction with electronic focus just feels like the camera is always 10 steps behind where I want it to be. And although it’s f/2.8 compared to Canon’s variable aperture lens, I found both cameras were noisy in low light, and the RX10’s smaller bitrate at 4k (100 mb/s compared to Canon’s 305 mb/s) cancels out some of the advantages of its better lens.

And while an actual EVF is a nice feature compared to the XC10’s attachable optical viewfinder, I find it difficult to use as a point of contact, compared to the XC10’s very comfortable viewfinder (once you actually get it on). On the RX10, your face has to be pressed so close to the viewfinder that you end up pressed against the microphone or accessory sitting on the hot shoe. I looked for eyecup solutions, but having found none I made a quick and dirty eyecup extension using Sugru, a clay-like substance that becomes a hard rubber as it sets. It does the job, comes on and off easily, and doesn’t get in the way of the articulating LCD.

With the Sugru eyecup on, I went on to test what I think is the most important part of this camera test (and the XC10’s too): can you shoot some decent handheld video with it? It’s a simple task, and it’s essentially how I imagine many people will want to use this camera for. The answer, sadly, is no. The lens image stabilization is so poor, that it’s nearly unusable handheld, even with stabilization applied in post. It’s utterly disappointing, especially since the lens stabilization in Canon’s XC10 is so damn good, even zoomed in to its longest focal length (273mm) plus its 1.5x digital zoom at 4k. I’m tempted to sell the RX10 II and get an XC10 for this reason alone.

Please note: I really did try to hold the camera as steady as possible, using the viewfinder as a point of contact. And, I shot this late in the evening so kindly excuse the high ISO noise.

A couple other negatives: the battery can only be charged with a cable connected to the camera, so you’ll probably want to get a third party dedicated battery charger. And as for the photo modes, focusing continues to be slow in auto mode (and slow going in manual mode), and the photos are generally pretty noisy and mushy. That said, the XC10’s photos are nothing to write home about either, so I’ll give them a tie here.

But in the end, the video jitters makes this camera a much harder sell for run-and-gun everyday shooting. A monopod, tripod, or shoulder support would help, but then you lose the portability and freedom of shooting handheld. It’s too bad, because otherwise the RX10 II makes for a pretty good value for video journalists.