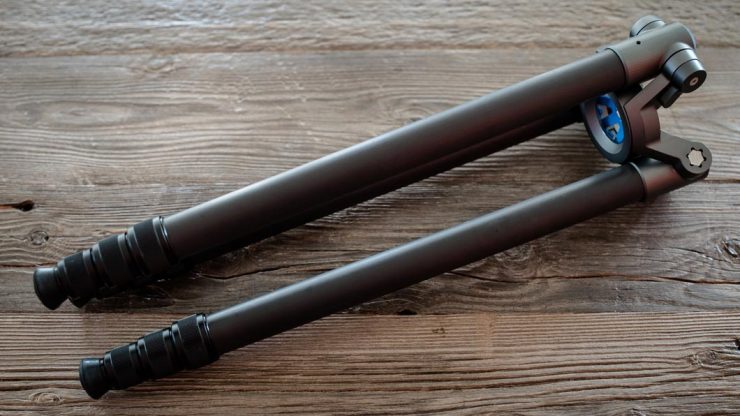 Aviator Camera Gear are no stranger to Kickstarter, having previously used it to launch products like their Aviator Jib. Now with their fourth campaign, they have set their sights on making a tripod that’s compact enough to take on as aircraft hand luggage but sturdy enough to support even larger camera packages like the RED Dragon.

The International will be constructed from carbon fibre to keep weight down, packs down to 51cm (20 inches) and expands to 170cm (5’ 7″). When paired with one of the company’s own heads it will also be possible to reverse the legs for travel to keep the overall dimensions very small.

Heads and associated mounting plates are also part of the Kickstarter project: Nice are calling it the SWAP system, and it features ball and fluid heads, locking camera plates and an adapter to mount other hardware to the tripod legs.

The legs will also accept heads with industry-standard 75mm bowl fittings so as well as a full kit it’s also possible to pledge for just the legs so you can use your existing hardware.

Overall it looks like a great, compact package, close in functionality to one of site editor Dan’s current favourites, the Gitzo Series 3, although at a much reduced price (at least for early backers).

If the International looks like it could be a useful addition to your (carry on) kit bag, head over to Nice Industries’ Kickstarter page to find out more. They’re looking to raise $100,000 US by December 15, and at the time of writing they’ve raised just over $14,000 US. We’ll certainly be watching how they get on with interest.

As with all Kickstarter campaigns please bear in mind that making a pledge does not guarantee that you’ll receive your reward. Projects can and do run into technical difficulties and sometimes fail, although Aviator do have a good track record in this regard.