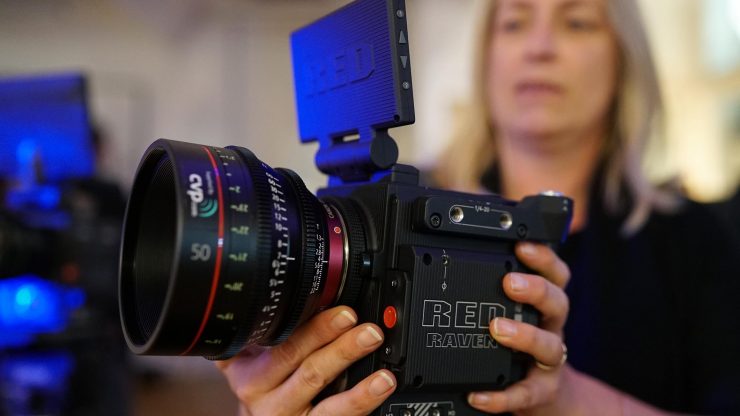 Even though we don’t expect the RED Raven to ship until next year, I was lucky enough to get my hands on it yesterday at a special event at CVP’s central London store. The highly anticipated entry-level RED certainly isn’t vapourware and the model they had on show seemed to be fully working. (Edit – It should be pointed out that this was a not a production camera, but an early development model. The final camera can and will change. As we previously posted the camera has already had its resolution increased to 4.5K and the model I saw did not have this feature).

Sadly I wasn’t able to run any tests or shoot on it, but it was good to get a sense of how it handles. The overall design will feel instantly familiar to anyone who has used any of the recent RED cameras. The body is very similar in size to the Weapon Dragon.

Without a battery system attached it is surprisingly lightweight and compact. It was displayed with a Jetpack Expander on the rear which has HDMI connections. This allows for easy configuration when the camera is used on a brushless gimbal or Steadicam and is available in one of the package options for the camera.

All of the main controls can be accessed via one of the optional touchscreen displays. Even though the camera was a pre-production model, the menus and settings seemed responsive and not laggy. I do love the way the settings are so clearly and simply laid out – something that Japanese manufacturers would do well to emulate. The screen was nice and clear and overall the experience is much the same as shooting with any other recent RED. That said, adjusting parameters by touch on the smaller 4.7 inch RED display was a little fiddly at times for someone with clumsy fingers like me and I might opt for the larger 7 inch display.

The sensor is slightly smaller than Super35 – especially if shooting in a 16×9 aspect ratio (Edit – The 4.5K mode has less of a crop in the horizontal direction due to its wider than 16×9 aspect). This was immediately obvious when attaching lenses that I was familiar with using. Even though the crop is not that great it still took some mental re-adjustment to figure out what the field of view of a particular focal length would be like. This was especially so with the wide Canon 16-35mm that I tried out. That said there are plenty of lens options that work and after some time I’m sure any operator would mentally adjust to the crop.

Perhaps the most impressive thing about the camera is the ability to shoot REDCODE RAW in 4.5K at 120 fps, or in 2K at 240 fps. If slow motion is your thing then this alone may be enough to tempt you into buying the camera. None of the other cameras of a similar size and price come close to shooting RAW at these speeds right now. The RED Mini-mag media is of course a cost you need to factor in if you plan to shoot a lot before downloading.

I didn’t get to see any results from the pre-production camera on a big screen, but from what I could make out on the touchscreen (which isn’t much) it seems the Dragon sensor in the Raven is noisy in super low light. (Edit – By which I mean 3200 ISO and above. None of the higher end cinema cameras I have tested come anywhere close to the a7S II at those ISOs. The photo above of the screen was posted to demonstrate how good the layout of the display was, not the high ISO performance. I played with various crops and settings. The low light performance of the camera may of course improve before it ships). This is to be expected and you shouldn’t hope it will compete with a Sony a7S II in this regard. Comparisons with cameras like the C300 mkII and FS7 will have to wait.

The electronic EF lens mount is a thing of beauty. Unlike the other higher end REDs this camera only ships in Canon EOS fit. It has a two stage locking mechanism that comprises a release button and a rotating locking collar which really holds the lens securely. Quite why Canon don’t do this as standard with their C100 and C300 models is beyond me. With the Raven there is no annoying lens wriggle of the kind you get with some other cameras. The extra security of the locking collar makes it much easier to use follow or remote focus too.

Because the mount is electronic you gain full control of the lens iris and also autofocus. I tested a couple of lenses including a Tokina 100mm and a Canon 50mm f1.8. These allowed you to change iris with no problems. If you want manual iris control you can always use adapted Zeiss CP2, ZF, Samyang or vintage glass instead. The autofocus is a contrast detection type and works much like the system on the original C300 or C100. In low light it struggles, and you shouldn’t expect the zippy performance of Canon’s Dual Pixel CMOS AF on the C300 mkII. It is, however, nice to have AF on the Raven as an option.

There are no built-in ND filters and this is perhaps the biggest drawback for real world shooters who value speed of operation. Variable ND filters are going to remain the go-to choice for doc shooting with the Raven. The base camera package does not have any XLR audio, or even a headphone jack. To get these you need to get the correct add-on options from RED, or use third party adapters. The REDVOLT expander seems to be the best way to solve these issues and adds a plethora of other connections – but at a price of $3950 and with a lot of added bulk. If you can live with just 3.5mm headphone and mic input jacks then the DSMC2 base expander at $1750 is an alternative.

Immediately obvious when you pick up the camera are the two large fans on its top plate – something the camera has in common with the Weapon. These suck air into the camera to cool it. The air is then expelled through a port on the bottom rear of the camera body. In an admittedly rather warm room you could feel the air being expelled from the rear of the camera even a couple of feet away. The positioning of the fans on the top plate would concern me if I was shooting in the rain and I can’t see how you would easily shelter them from water without hampering the operation of the rest of the camera. (Edit – It has since been pointed out that there are a number of fan settings to help maximise cooling while minimising noise. The cooling system of the camera has been completely re-engineered since the Scarlet and Epic models to provide better thermal protection). 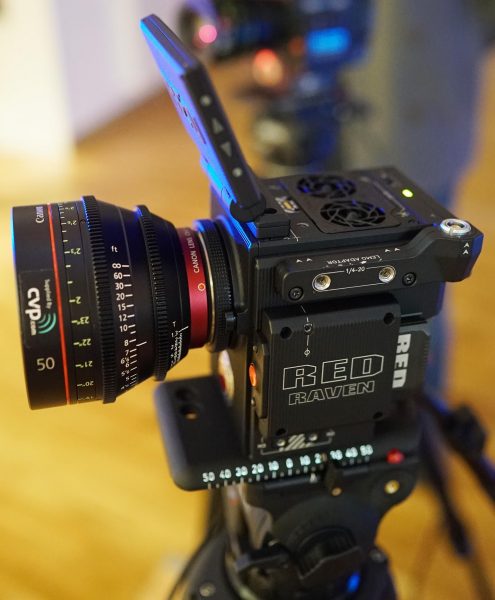 Overall, I was impressed that the build of the camera doesn’t appear to be much less solid than the other RED models. It certainly feels like a professional camera and is a step up from the construction of cameras like the FS5 and C100 mkII. At a price of around $10,000 US for a shootable Raven package it is certainly worth a look if you are in the market for a new camera and want to get into the RED ecosystem. For documentary shooting and especially handheld work I’ve never really liked the touchscreen-centric way REDs work, but that is my personal preference and you may find it works well for you. Not having built-in ND and XLR audio by default is another potential deal breaker for me; you can solve the XLR issue, but it adds a lot to the cost of the camera. If you are shooting slower paced work or commercials then these things are likely to be far less of an issue.