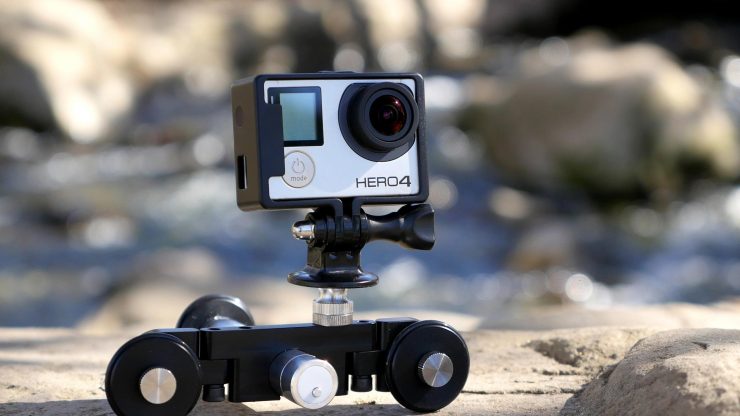 If you love motion-controlled shots but never seem to be able to find the time, energy or money for a fully motorised slider system, then the new Hercules by Rollocam may be for you. It is the world’s smallest motorised camera motion control system; so small, in fact, that it will fit inside your pocket.

The design seems really clever and simple to use. It is basically a super-small motorised SKATER dolly with three tiny wheels. It weighs just 4 oz/110g and collapses down into two main parts, the longest of which is just 4.5 inches long. The makers claim that you can take it out of your pocket, assemble it, program it and be shooting within 30 seconds. It can be used for both timelapse and regular speed moves, with a maximum speed of 1 inch/sec. It runs on a single AAA battery. Amazingly, despite its tiny size, it can carry a camera weighing up to 20 lbs / 9Kg.

The idea of making motion control a more spontaneous thing was at the centre of the Hercules creators’ thinking. At present you really have to plan to take out a slider and motor unit for a shoot. On many documentary shoots I’ve done there simply isn’t the time to set one up. To just have something in your bag that gives you some extra motion options in a hurry is a great idea.

For the Hercules to work you need to run it on a relatively smooth and flat surface. You simply power it on, set the speed, and let it run. If you want to use it on rougher terrain you either need to improvise and construct your own flat surface, or buy an additional 20 inch long aluminium track which the Hercules can run along.

The Hercules track looks very much like a regular slider and has four adjustable feet that allow you to level it on uneven ground. It weighs one pound and can also attach to a tripod. It requires the use of a larger wheel set which replaces the standard one. These larger wheels are required to clear the side rails of the track and also effectively double the speed of travel.

Rollocam claim that the volume of the motor ranges from 15db at the slowest/quietest speed (the equivalent of a pin drop) to 27db at the fastest/loudest speed (roughly the level of a quiet whisper). There is also an optional freely rotating drive wheel can replace the motorised version and allows the Hercules to be simply pushed along if you prefer.

In its basic configuration the Hercules is capable of carrying GoPros, phones (with the use of a phone tripod mount), compact cameras and even small DSLRs. Larger cameras will require the optional cheeseplate, which offers more mounting positions to allow better positioning of the centre of gravity for heavier loads. Although the maximum payload is 9kg, the shape and weight distribution of some larger cameras will make them incompatible. Overly long or unbalanced camera and lens combinations are unlikely to work and may cause the Hercules to topple over. I would envisage most users would want to use the Hercules with an a7S or GH4 sized camera and shorter lens and this shouldn’t cause any problems.

When used in timelapse there are five different cycle times. These are programmed using multiple presses of the single button. A series of LEDs show the status of the Hercules. You can set it to move the cart 0.01 to 1 inch in either direction per cycle. The cycle can last from 1 to 60 seconds. This combination of options allows for a wide range of speeds that should suit most applications. There is no way to ramp speed, however.

At present the Hercules doesn’t allow you to tell the cart when to stop moving. It will simply keep going until it hits something or falls off an edge. To stop it you need to grab it and turn it off. I don’t see this being a problem as long as you use common sense.

To solve this the Hercules team also just announced their first stretch goal for the project. If funding permits they want to add a system to bring the Hercules to a ramped start and stop, as well as other clever options. A magnetic sensor will be built into the Hercules, which will trigger specific programmable functions when it rolls over a magnet the user has placed in its path. Users will have the option to trigger a speed ramped stop, or can opt for a feathered reversal of direction, resulting in a perpetual camera move that smoothly goes back and forth the distance between the magnets you’ve put down. You can think of it like a magnetic version of geo-fencing. The ramped start will work for every move even if a magnet isn’t used.

The obvious use for this would be when you are shooting an interview and want the B-camera to continually track back and forth.

The Hercules also has some smart accessories to allow it move in different ways. The Curved Wheel Bracket makes the Hercules to move in a curved path. This is great for table top macro shots of products, or sweeping shots of interiors and vistas. A panoramic base allows for panoramic photos and timelapses – although you are again limited by needing to find a flat surface to run the Hercules on.

If this is a success I imagine there are all sorts of options for future variations of the product. I could see a much larger one for bigger cameras, or even more user-programmable functions.

The Hercules has been developed by a three person team based in California. They launched the project on Kickstarter recently and are already fully funded. There is still time to back the campaign until the 27th of November.

You can find out more and pledge on the Hercules Kickstarter page. As with all Kickstarters a pledge is not a guarantee that project will be a success, although the Hercules looks like a safe bet.