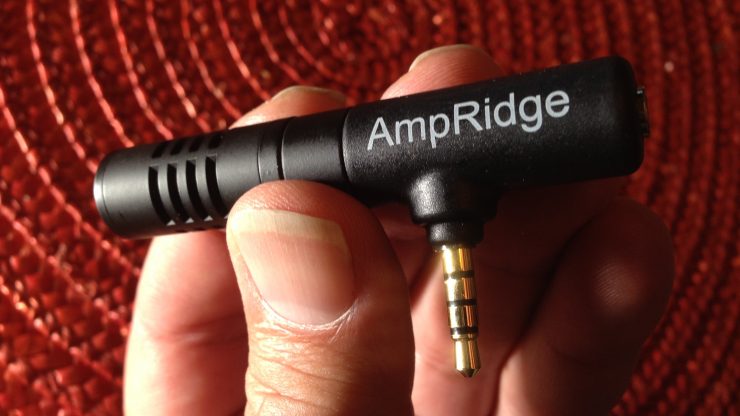 I love serendipitous finds when I go to equipment shows.  At Photo Plus Expo in New York, AmpRidge’s booth, where they were showing the tiny MightyMic SLR Camera Video Microphone, was next to Fotodiox at the far edge of the show.  Though they’ve been around for a while, it was the first time they had a booth at any show.

As a multimedia journalist, I often use an iPhone for work and I like to be prepared to collect audio even when I’m carrying a small camera.  Whenever I see an audio gizmo that works with an iPhone, I try it out. This one not only works with your phone, but also with your camera.

The MightyMic is a well-constructed shotgun mic that plugs directly into the headphone jack on a phone, and comes with a coiled cable that adapts it to the stereo 3.5mm jack on a camera.  It does not use a battery.

I was astounded when I plugged it into my camera and listened to it.  It has a very high output and sounds pretty good for a tiny little shotgun.

The video above was recorded using a MightyMic plugged into my VG30 and handheld in front of the camera, a little over two feet from the subject.

I liked it enough to spend the $85 to buy one, plus $15 for the optional wind muff. (It comes with a foam windscreen and a small leatherette case.) They have a number of products for your phone beside this mic.