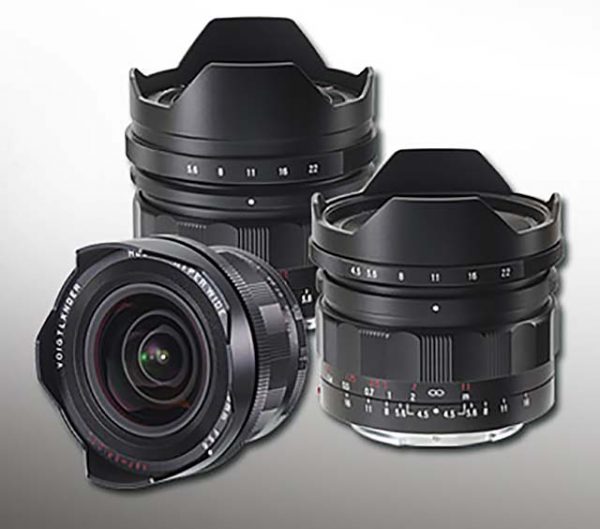 First Zeiss and Samyang, then Veydra, and now Voigtlander, have designed manual focus lenses that fit directly onto Sony E-mount cameras. Today Voigtlander pre-announced three new full-frame wide angles that will mount directly to cameras like the A7S II, FS5 and FS7. Scheduled to ship in Spring 2016, the new 10mm f5.6, 12mm f5.6 and 15mm f4.5 are manual focus lenses with aperture rings that can be de-clicked. I assume this is the same de-click system that works so well on Voigtlander’s M4/3 lenses, this should make them very usable for video.

Despite being fully manual in operation these lenses have electronics inside that sense when the focus ring is being turned and can communicate this to appropriate Sony cameras which then automatically switch into magnify mode for focus. This is the same feature that is seen on Sony’s own E-mount lenses as well as the Zeiss Loxias.

The 10mm f5.6 is a completely new design, while the 12mm and 15mm are revised version of existing M mount lenses. I assume that this move means that other Voigtlander M lenses will eventually be made available in a native E-mount as well. This would be welcome news for filmmakers who want smaller yet relatively affordable alternatives to true cine lenses.

In Spring 2016 Voigtländer will release a brand new, much-anticipated line of Sony-E-Mount lenses, that can be used on Sony E-Mount cameras without an adapter.

According to the tradition of Voigtländer the first three lenses of this new lines are covering an extreme wide angle range and are perfect for landscape and architecture photographers:

While the 12 mm and 15 mm lenses are already available with a VM-Mount the 10 mm focal length is completely new. As these extreme wide lenses are challenging a fast and smooth communication between lens, camera and photographer, which is extremely important.

If enabled the camera changes automatically in magnifying mode during focusing which allows highest accuracy. All lens-relevant data such as focal length, aperture and focal distance are transmitted to the camera. This data is  shown in the view finder/display and used for metering and image stabilization.

The selective aperture control system for full frame is used for the first time in these lenses – a vital feature for film makers as it allows a stepless and soundless aperture control.