We have covered the autofocus capabilities of the C300 mkII already on Newsshooter, but recently I had to chance to test it further on a no-budget music video with Level 42’s Mike Lindup.

As well as being a professional musician, Mike is also a keen videographer, and we both wanted to see just how the C300 mkII autofocus would handle this real-world scenario. Steadicam operator Ilana Garrard, Mike and myself had only a few hours on an overcast London day, but it was enough to shoot the test video.

The idea was to set the camera into autofocus and see if it could keep up with Mike as he moved along the streets of London. The entire thing was shot on a Steadicam Pilot with a 35mm f2 IS Canon lens. This wasn’t too complex a test, but these are probably the kind of shots that many shooters will be expecting to use autofocus for – especially if they don’t have the luxury of someone else to pull focus.

We tried both the iPad control mode, where you choose a focus point manually by touching it, and the face detection system. We quickly found that the iPad’s wireless wasn’t responsive enough in a busy urban area with lots of wi-fi users, so we were forced to rely on the face-detect AF.

We shot with the lens mostly set between f2.0 and f2.8 and left the autofocus to fend for itself – although you need to set the responsiveness of its tracking in the menus (for this test, we went for a medium setting). We discovered that the camera did a reasonable job most of the time, as long as Mike was looking at or near the camera and didn’t make rapid course adjustments. The moment Mike’s face was turned from view, or he looked downwards, the autofocus didn’t work so well. This stands to reason given that the system is called ‘face detect’ and in that eventuality it can be set to simply stop at the point it loses contact until it ‘sees’ a face again, or keep on attempting to autofocus. When the face does become visible again there seems to be a lag before the camera realises what is going on and the system focuses back in on the face. In the video below, with the camera information left on, you can see how the system is actually working.

The system probably got things in focus over 90 per cent of the time, but it wasn’t infallible. Holding focus at f2 on a moving subject impressed me though.

For simple shots where a correspondent is walking and talking, or where you are following a subject with a gimbal or Steadicam as they walk around, I think the autofocus is a godsend for the single operator. I felt that it managed to do a much better job than I would have done focusing manually – but not as good as a professional focus puller would have. 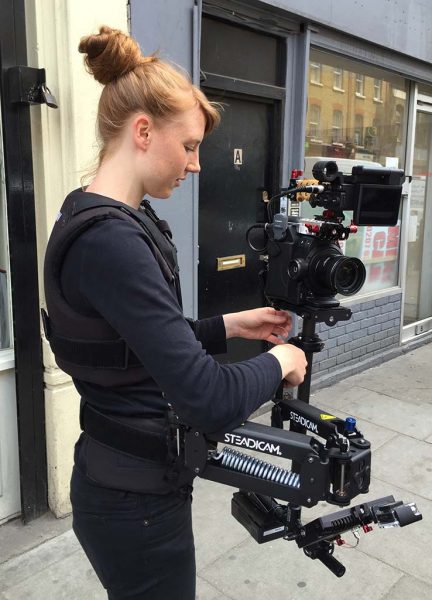 Illana is an experienced Steadicam operator and after some initial enthusiasm before testing she came to a slightly different conclusion to mine. She said she found that having to work within the constraints of the autofocus system was ultimately too limiting for creative work, while agreeing that for simple piece to camera shots it would have some value. This is what she had to say:

“When doing some initial tests of the auto focus on the c300mkii it seemed quite promising. It was a little fiddly to get the right settings but it seemed to focus really well even with someone going in and out of the frame. I was intrigued by the fact that you could adjust the focus on an iPad but after having a play with it came to the conclusion that in reality it probably isn’t that useful as it is simply not quite good enough. The setting we used to shoot the video was set to focus on the face. This became tricky when I attempted to move away from the face. It became highly limiting in terms of the shots I could achieve as the focus did not want to move onto the back of the head or down to the feet. I found this quite frustrating and would have rather had no auto focus and just kept my distance. In my opinion this kind of technology still has a little way to go. However, saying that, I also think this tool could be really useful in certain situations. Where I could see myself using it is in an interview setup where there is a clear point to focus on. As a Steadicam operator I would never choose to use the autofocus tool even if I had no focus puller as I ultimately found it more limiting.”

The camera was set to record 4K XF-AVC internally to its CFast 2.0 cards, and the colour profile was set to Production (ARRI Alexa match) with C-Log 2 gamma. An Atomos Shogun was used as the Steadicam monitor and also to record a feed from the camera with overlays enabled so we could see what the autofocus system was doing during playback.

Please note that the footage is from a pre-production camera and should not be evaluated for image quality as it has not been properly graded. All that has been applied is a ARRI Alexa Log-C LUT from Premiere to give an idea of what the image could look like. All that is really being tested here is the autofocus.

Thanks to Ilana and Mike for giving up their time to test this out.

You can buy Mike’s new album ‘On The One’ from his website or download it from Amazon.