We caught up with Andrew from SLR Magic at IBC to get a first hand look at the new 2x and 1.33x anamorphic cine lens sets.

The SLR Magic ANAMORPHOT-CINE 2x lens set comprises of a 35mm, 50mm and 70mm in a M 4/3 mount. According to SLR Magic, they developed the SLR Magic ANAMORPHOT-CINE lenses to deliver the classic contrast, distortion, chromatic, color aberration, and flare characteristics of vintage anamorphic lenses, but with the convenience of a matched lens set without the hassle of aligning and matching lenses to the already popular SLR Magic Rangefinder with Anamorphot adapter combination. 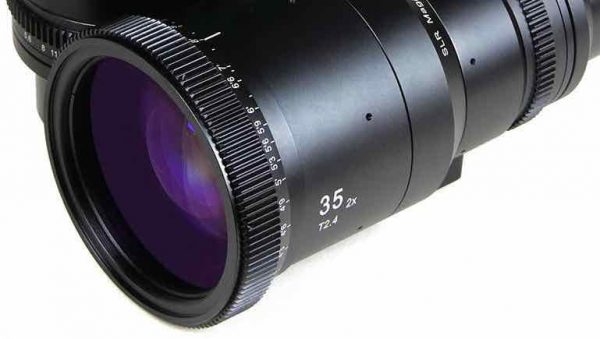 The lenses have a nice feel and weight to them and are very easy to focus. They look to be a very interesting proposition for those looking to shoot with proper anamorphic lenses that don’t cost a small fortune. The 2x anamorphic set would be a good combination when used in conjunction with the Panasonic GH4 which is able to record in a 4:3 aspect ratio. This aspect ratio is perfect for using the 2x stretch anamorphic format.

SLR Magic also showed us the 1.33x anamorphic lenses, that let you achieve the 2.35:1 scope aspect ratio. To achieve this look when using spherical lenses, filmmakers usually just crop off the top and bottom of standard 16:9 footage, but As a result, 25% of sensor/negative information is discarded. The lenses are very well made and I got a chance to use them on a Sony a7S. The lenses have a lot of character and produce strong levels of anamorphic streaking and lots of interesting flares.

This from SLR Magic:
This 1,33x anamorphic lens help filmmakers to maximize their image quality by preventing this loss of vertical resolution. The unique 1,33x squeeze factor uses the entire 16:9 sensor/negative area to achieve the desired 2.35:1 aspect ratio. The SLR Magic ANAMORPHOT-CINE 1.33x does this by compressing a 33% wider field of view to fit the width of the 16:9 sensor/negative without compressing image height.

Modern professional cinema cameras have large sensors capable of capturing an image in the 2.35:1 format directly, using spherical lenses, but film makers still desire the anamorphic “look” which often limits them to using rare vintage lenses. These present a number of difficulties in practice such as size, weight, lack of close focus, availability, and high price. We sought to overcome such issues with the SLR Magic ANAMORPHOT-CINE lenses.

The SLR Magic ANAMORPHOT-CINE 1,33x create a unique “artifact” such as horizontal lens flare, commonly referred to as anamorphic streaks, and may create slightly elongated bokeh. Over the history of cinema, these same stylish effects have contributed to the cinematic “look” of epic motion picture photography. Characteristics that shape this anamorphic “look” come from “front-mounted” anamorphic designs such as the SLR Magic Anamorphot while “rear-mounted” anamorphic designs have more suppressed anamorphic characteristics.

Panasonic seem to be the only company making low cost cameras that can record in aspect ratios to take advantage of anamorphic lenses. It will be interesting to see if any other manufacturers start adding the option in their cameras in the future.