We’ve had pre-production samples of the brand new XEEN cine lenses at the Newsshooter offices this week. Made by Samyang there are initially three available – a 24, 50 and 85mm all at T1.5 – with three more to complete the set following later on. All three lenses cover a full frame sensor and as such are well suited to newer cinema cameras like the RED Weapon or Sony a7S and a7R II. Price has been set at around $2500 per lens (with slight variations depending on where you are in the world) which is highly competitive when compared to brands like Zeiss, Schneider or Canon. This must of course be weighed against the fact the XEEN brand is not established and they are untested in the rigours of real production.

Each has a solid metal construction, fully geared focus and iris rings, and a common 114mm diameter lens front. The Korean-made lenses are optically the same as the popular Samyang/Rokinon video SLR primes, but with new Multi-Nano coatings on the glass that are said to improve the image. The lenses also have quite circular aperture blades and a nicely dampened iris ring.

Initially we thought that the lens mounts on the XEEN range were fixed, but we’ve been informed that this isn’t the case. They will be available in PL, Canon, Nikon, Sony E and Micro 4/3 mounts which will be changeable by a technician if you return them to your XEEN agent. Pricing isn’t given for the extra mounts or the installation but I expect it to be competitive.

The lenses we tested aren’t full production versions, so you might see slight changes in the final product. That said, I think that the results here are a pretty good indication of what the lenses will be capable of.

Our first test was of the XEEN 85mm T1.5 against the popular Zeiss CP.2 85mm T1.5 and a Sony 85mm T2.0 CineAlta lens. All three lenses were PL mount and we fitted them to a Sony a7R II with PL mount adapter. All shots were done using S-Log2 and both graded and ungraded versions can be seen below.

The CP.2 lenses are around twice the price of the XEENs but come with the esteemed Zeiss brandname and a familiar look and feel. They are widely used in productions and are a proven tool. They benefit from user-changeable lens mounts and come in PL, EF, Nikon, E-mount and M4/3. All the CP.2 lenses apart from the 18mm cover a full frame sensor, but unlike other more expensive cine lenses they do not all share a common maximum aperture. They are also smaller and lighter than the equivalent XEEN or Sony lenses. Expect Zeiss lenses to have a good resale value too should you want to upgrade in the future.

The Sony CineAlta PL lens line was first introduced along with the PMW-F3 several years ago. There were originally three lenses that only worked on Sony’s F3, F5 and F55. More recently they revamped the lenses completely and now offer a line of six lenses that have a standard PL mount allowing them to be used on practically any PL mount camera. The current versions have a new optical formulation and a common T2.0 maximum aperture. They are very solidly made and most are around twice the weight of the equivalent XEEN or CP.2 lens. Despite this they have not been a popular choice, even with owners of Sony cameras. It is likely for this reason that they recently received a major discount both at B+H in the USA and CVP in the UK. Amazingly, a set of three or six Sony PL lenses now works out cheaper per lens than the XEENs.

In the test the XEEN lens appeared to be warmer than the Sony or Zeiss. In 4K the XEEN also appeared to be the sharpest of the three. The Sony had a nice image and bokeh was quite pleasant, but there was a slightly strange rendition of the light on the phone. To my eye the Zeiss did look more cinematic, but you may have a different opinion. The Zeiss was also the only lens to exhibit obvious lens flares.

In the next quick test we pitched the XEEN 24mm T1.5 against the slower Zeiss 25mm T2.1. The XEEN lens, being a stop brighter, is obviously a good choice if you need to shoot in super low light conditions. Our test was on a bright sunny day and with the filters we had at hand, we had limited exposure choices. When the lenses are set at T2 and T2.1 it is possible to get reasonable background separation if the subject is close to the camera. It is interesting that at these apertures there is a marked difference in bokeh between XEEN and the Zeiss.

Of course, the virtues of the image from any lens are highly subjective. What one person likes, another might hate. In the case of these tests I am happy to let you decide which you like and why. If you do end up renting or buying a set of these lenses it is clear that they are all capable of producing great results. 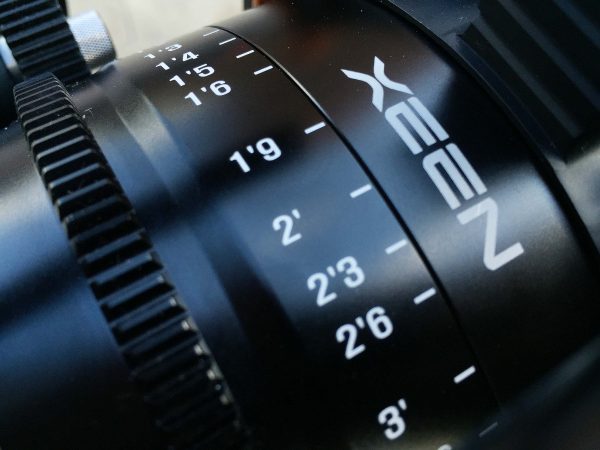 The XEEN lenses are certainly an interesting proposition for budget-limited shooters who might otherwise be looking at buying high-end Canon or Zeiss stills lenses. Until there is a full lineup I can’t see higher-end productions choosing to shoot with them, but that is something that needs to be reexamined when the XEENs become a full set of six.