These days it seems that brushless gimbals are everywhere. They are being used on productions big and small, and not just for handheld work. The stabilising power of the gimbals like the DJI Ronin, MoVI or Letus Helix can be used to control and stabilise the camera when mounted just about anywhere. One obvious place to mount a brushless gimbal is on the hood of your vehicle, and Rigwheels have just made that a whole lot easier.

The new RigMount XL is an oversized platform that magnetically attaches to your vehicle, or any suitable surface, to form a solid connection. The gimbal is then attached to the RigMount XL via an adapter plate. The increased weight of the camera plus gimbal, and its raised centre of gravity, require some seriously strong magnets. Thankfully the Rigmout XL magnets provides 400 pounds of pulling force as standard and more can be added for up to a total of 1000 pounds pulling force. This means that regular road speeds shouldn’t be an issue for the mount, but wind resistance can out course become an issue for the gimbals themsleves. Rigwheels say that with smooth roads you can expect good results at normal driving speeds.

If a car has a lot of curves and contours the magnets can be swapped out for the company’s A-Cup suction cups which more easily conform to curved surfaces.

Rigwheels have been testing predominantly with Movi and Ronin, which make up a large percentage of the professional market. They will offer adapter plates for gimbal mounting that are specific to different models. These are not included in the kits. RigWheels will have a Ronin-M plate available next month for $99 and a Movi plate soon thereafter. Third party mounting plates should also work.

The magnetic version of the RigMount XL starts at $425, with the top model with 12 magnets and eight suction cups priced at $750. For full details visit the Rigwheels website. 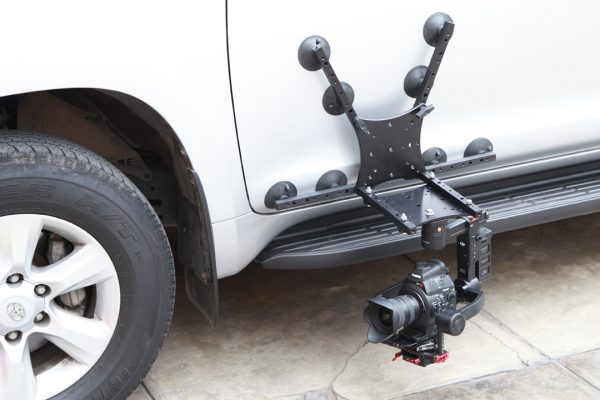 This from Rigwheels:
“Brushless gimbals have quickly become a regular part of day to day production for many of us. Over the last couple years we have received countless inquiries about mounting gimbals with our RigMount X products so we’ve tailored these new larger configurations for exactly that. Mounting a gimbal involves more weight as well as raising the center of gravity of the rig. This requires a mounting platform with a wider stance which RigMount XL delivers. The standard magnetic setup provides up to 400 pounds of pulling force and additional magnets can be added for up to 1000 pounds of pulling force. Several suction options are also available. Systems will begin shipping early September with with a few tweaks to the parts which are in production now.”