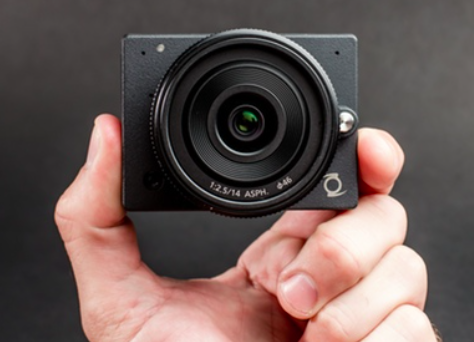 A previously unheard of company called Z Camera has unveiled the 4K-capable E1, which they claim is the world’s smallest Micro Four Thirds interchangeable lens 4K camera. Z Camera was only founded in 2013, and it is interesting to see a relatively small company go head to head with the likes of Panasonic, GoPro and Blackmagic Design. At first glance the camera seems to be a cross between the Blackmagic Micro Cinema Camera and a GoPro. 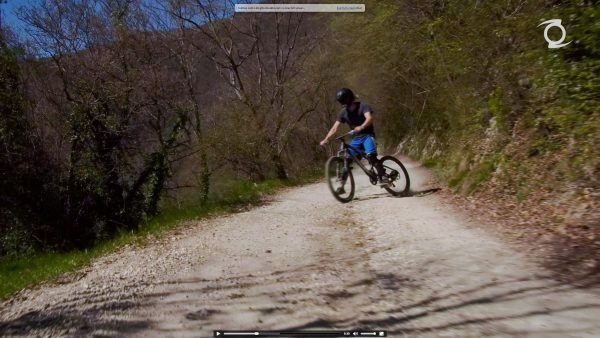 The cameras design and size means it will be suitable for a wide range of applications. The Z camera will be right at home on a drone, mounted on a car or even a human being. The beauty of having an interchangable lens camera that is this small, is it isn’t limited to being just a fixed focal length action camera. The ability to pair it with cameras such as the Panasonic GH4 or even the JVC GY-LS300 for use as a B camera could end up being the deciding factor for buyers. 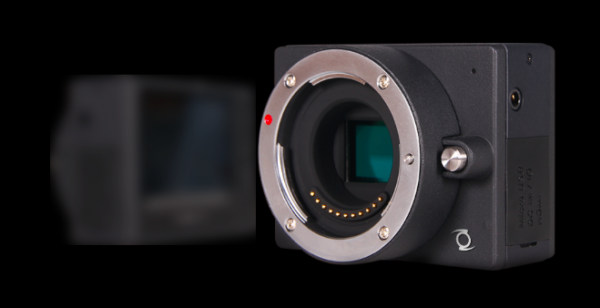 Interestingly enough the Z camera is using a 6 megapixel Panasonic MN34230 CMOS 4/3 image sensor. This particular sensor was developed by Panasonic back in 2013. It is the same sensor that can be found in the Olympus OM-D E-M1, Panasonic GM1 and Panasonic GX7. The sensor is said to be rated at 200 ISO. According to the company, the camera is relying on Panasonic’s exclusive pixel process technology and ultra-low noise circuit design. This allows for high sensitivity and high resolution dynamic photography. This pixel size is suitable for full HD and 4K capture of high-resolution images with superior color reproduction. It is hard to judge performance based on what sensor this camera is using as we have no idea what type of processor is being used. 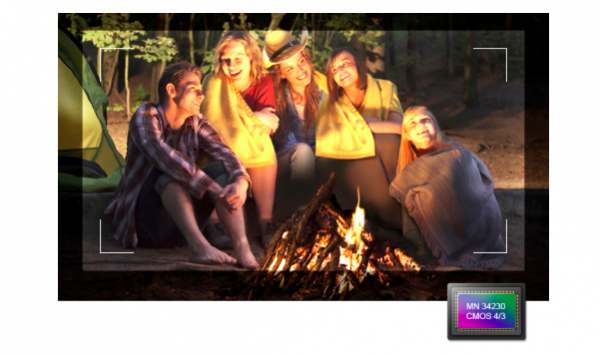 The camera uses ClearVision 3D noise reduction technology, that is claimed to offer excellent image quality in many scenarios, especially in dark environments. As well as incredible performance in natural settings. The ISO is adjustable up to 102400. As the sensor in this camera is supposedly only rated at 200 ISO, it will be interesting to see how well it will perform in low light conditions. 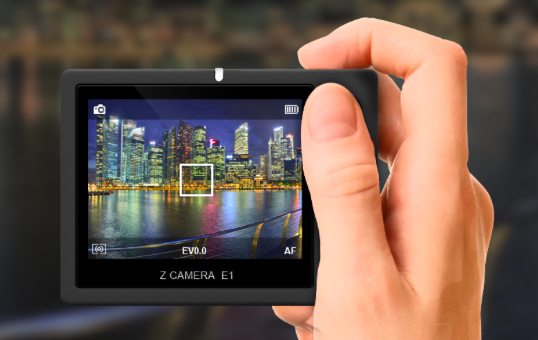 The camera also uses contrast detection autofocus optimisation technology, that is claimed to be high speed and offer accurate results. Continuous autofocus is available in both photo and video modes.

Z Camera comes enclosed in a full magnesium alloy body, which should make it durable and reliable for use as an action camera. It isn’t water resistant or water proof so don’t try and use it like a GoPro. The company is apparently working on an underwater housing for the camera that may be available in the future. There is also a standard 1/4”-20 thread for mounting the camera. The camera also has a HDMI 1.4 Mini output that will support a clean output of up to 1080p60. It also comes with a standard 3.5mm audio jack for a microphone. It is unclear what functions are available for audio control at this stage. 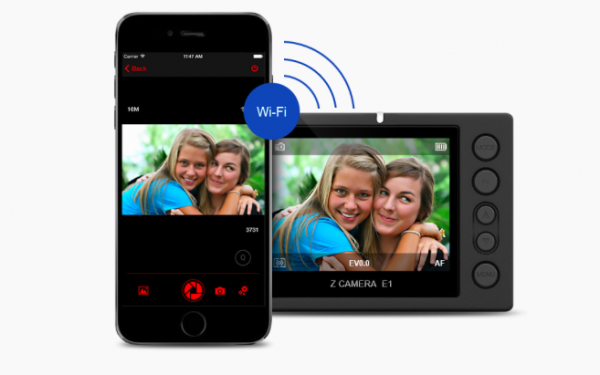 One of the most interesting features of the Z Camera is that it has built-in Wi-Fi and Bluetooth, that works with the Z Camera App (iOS/Android). This offers users complete control over all camera functions, including the video and photo settings, as well as setting the multitude of capture parameters for time-lapse. All this can be done without needing to be in physical contact with the camera. The Z Camera App allows you to sync between your mobile phone and Z Camera so you can share your content instantly. Live review of content is also possible. The Wi-Fi has a claimed range of +/-80m and has an ultra-low 200-300 millisecond latency. The App was designed using SDK, which in the future will allow third party developers to ad their own functionality to the camera. You can already find the iOS version on the Apple App store – which is a pretty indication that this camera isn’t just vapourware. 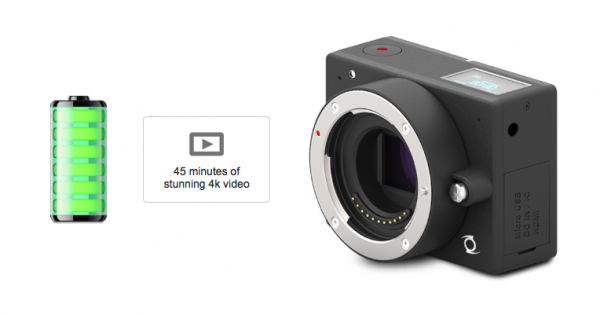 As far as battery life goes, the company claims the Z Camera uses a efficient power consumption system that allows you to record up to 45 minutes of 4K (3840×2160 @30fps) video from a single charge. 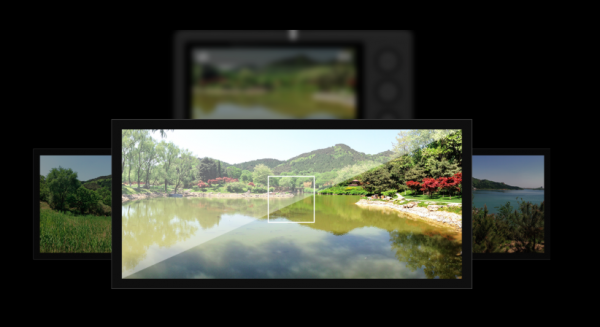 It features a 2.5 inch (6.35cm) TFT LCD display, that is said to offer improved clarity in bright sunlight.

The obvious question is how does it compare to the Blackmagic Micro Cinema Camera based on the specifications. The biggest advantage the Blackmagic Micro Cinema Camera has over the Z camera is that its sensor has a claimed 13 stops of dynamic range and a global shutter. The Z camera E1 has a claimed 10 stops in normal mode, however the company has mentioned that they are working on an extended DR mode. The Micro Cinema Camera also lets you record 12-bit CinemaDNG RAW format or in the 10-bit Apple ProRes family of codecs, where as the Z Camera is limited to H.264 60Mb/s. Both cameras offer both Pal and NTSC frame rates, even though the specifications on the Z Camera website only list NTSC frame rates. What the Micro Cinema Camera does’t do though is 4K (you need the studio version for that, which has no internal recording). It is limited to HD (1920×1080) at 30p when using the global shutter, or 60p when not using it. The Z Camera also features a LCD screen, while the Micro Cinema Camera has no screen. The Z camera is a lot smaller. Its dimensions are 2.96″ x 2.20: x 1.97″ (75.2mm x 56.1mm x 50.25mm) and it weighs just 7.63 oz (216.59g). The Micro Cinema Camera is 3.25 x 2.74 x 2.57 (8.26 x 6.96 x 6.53 cm) and it weighs 10.65 oz (301.92 g) 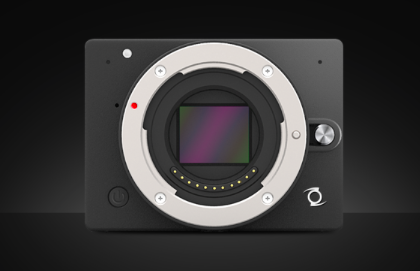 The company is planning to sell the E1 Z Camera for $699 US which is low considering the price of the BlackMagic Micro Cinema Camera, which is its closest competitor is $995 US. The company is running a Kickstarter campaign to launch the camera and are looking for $42,000 in funding. At the date of this article they had already reached that goal The camera was available to pre=order for just $499 US but those deals have now all been taken. The company hopes to start shipping the camera in December 2015.

Usual Kickstarter health warnings apply – there are no guarantees that your pledge will ensure you actually receive the finished product.

The Z Camera E1 looks to be quite an impressive camera for the price. Given its small size, interchangeable M43 lens mount and the ability to record 4096×2160 video at 24 fps it may well prove to be a good alternative to a Blackmagic Micro Cinema Camera or even a GoPro. Until the camera actually ships and we see more footage it is hard to form too much of an opinion based just on the specifications.