Vincent Laforet is taking a revised version of his very successful Directing Motion tour to Australia this July. The tour, which originally ran through 32 cities in the US last year and was attended by around 3,500 people, is focussed on camera movement, blocking, lensing, and sequencing. Additionally Vincent covers his approach to commercial jobs including how he secures them and manages them to successful completion. Vincent will be conducting his Directing Motion Tour in Sydney on July 18th-19th and in Melbourne on the 25th-26th.

The Directing Motion tour will consist of a one day lecture which covers mostly theory, and then on the second day participants will be involved in a intensive hands on workshop. Lecture tickets are reasonably priced at $130 AU and the hands-on workshops are $650 AU, but there’s a discounted rate of $700 AU if you attend both. Vincent’s tour is being presented by RØDE Microphones and Atomos, and I’m told there will be some gear given away at each event.

Tickets are available via RØDE’s website here, or directly from Ticketbase for Sydney or Melbourne.

If you missed out on the US tour and aren’t in Australia there’s a paid digital download available with eight hours of content available here. 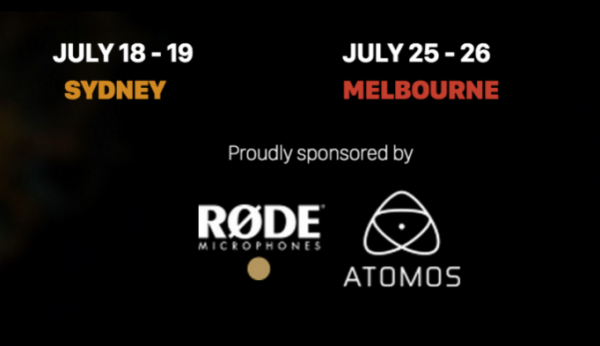 From the press release:
Australian filmmaking brands RØDE and Atomos are excited to announce they are expanding Vincent Laforet’s exciting Directing Motion tour internationally with select dates in Sydney and Melbourne this July.

As one of the industry’s most acclaimed commercial directors and filmmakers, Vincent Laforet has worked with some of the world’s largest and most popular brands including Nike, Canon and Apple. From a background in photo journalism where he was awarded a Pulitzer Prize working for the New York Times, Vincent was amongst the early pioneers of digital filmmaking and has achieved maven status, helping hundreds of thousands of filmmakers around the world to develop their craft. He continues to combine his love for moving image and stills, as displayed by his recent aerial photography project AIR, which has attracted global media coverage.

In 2014 Vincent hosted an educational tour titled Directing Motion, which visited 32 cities across the US and saw him present to 3,500 filmmakers of all levels. The workshops focused on cinematic camera motion, deconstructing the ‘how’, ‘when’ and ‘why’ of dynamic cinematography, one of the most important aspects of modern filmmaking. Feedback from attendees was overwhelmingly positive, and a flood of requests to take the workshop overseas poured across social media.

Today RØDE and Atomos are proud to announce that they have collaborated to do just that; Bringing Vincent’s Directing Motion tour to Sydney and Melbourne, in an extended two-day format that expands on his US tour syllabus.

The first day will be a lecture format, unlocking the theory behind camera motion. Vincent will showcase his favourite scenes from cinema and deconstruct them to explain and analyse camera movement, blocking, lensing and sequencing. He’ll also discuss his highest-profile commercial jobs, sharing how he won the jobs as well as how he managed them to successful completion.

The second day is an intensive hands-on workshop, where a small group of filmmakers will work alongside and with Vincent to plan, film and produce a cinematic short.
Tickets are available separately for both the day one lecture and the day two workshop, however it is strongly recommended that workshop attendees also attend the lecture. A discount is offered to delegates that wish to book both days, however placements are extremely limited and expected to sell out fast.

“Thanks to the support of RØDE and Atomos—two companies committed to supporting film makers around the world—I’m incredibly excited to be able to announce a brand new series of workshops that we’ll be taking to Australia this July.” commented Vincent. “These cities represent creative hubs for film makers, photographers and other visual artists and I’m looking forward to bringing both the theory and practice of Directing Motion to both cities as we develop stronger, more compelling work to better engage and connect with our audiences.”

“Whether you’re a photographer, film maker, or simply interested in cinema and the art and craft of story-telling, I guarantee you’ll never be able to look at the world of motion in the same way again after attending this workshop.” he continued.

“Vincent is an incredible educator, and RØDE is extremely flattered to be collaborating with him on this tour.” commented Scott Emerton, RØDE’s Global Marketing Manager. “I’m confident that amateur filmmakers and professionals alike will draw a huge amount of value and insight from this evolution of the Directing Motion workshop”.

To book now or find out more, visit www.rode.com/directingmotion.