The playback deck will take SxS cards from your 4K shoots on an F55 (and most other card-based cameras) and not only feed them out via 3G SDI ports but also back up the footage to an external USB-3 hard drive. It will also take XQD and SD cards via adapters.

Sony’s Marketing Manager for Large Sensor Acquisition, Peter Crithary, walks us through the features of the under-$3500 deck, which will be available in June.

The PMW-PZ1 features multi-format playback capability for 4K (24p to 60p) and HD video, supporting a variety of formats including XAVC Intra & Long, MPEG HD422 and MPEG HD.  (Some MPEG features are coming in a later firmware update in autumn 2015.)

It will be useful for playback on digital signage, ingest to NLE’s and broadcast feeds and for dumping your cards on set.

Unfortunately, it doesn’t record – only playback or copy/transfer to other media. 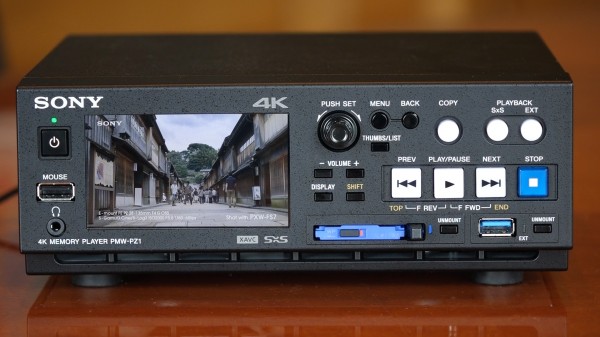