At CP+ in Japan Tokina were showing their new full frame AT-X 24-70mm f/2.8 PRO FX lens. Tokina doesn’t have a price set for this lens and they told me that the version being shown at CP+ was very much still a prototype. I did however get to put it onto my Sony a7S and film some test footage. I found the prototype produced a pleasing image as well as exhibiting nice bokeh. In manual focus mode the lens was easy to operate and allowed for smooth focus pulls if you are using it for video work. 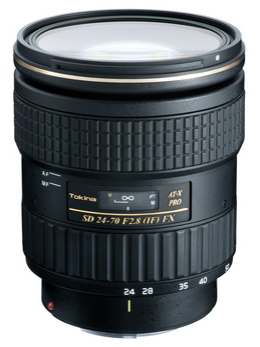 If your already familiar with Tokina lenses you will find that the build quality of the new 24-70mm is very similar to the companies other offerings. The lens weighs in at 1000grams and extends out when zooming. It has a close focus ability of 0.38m. The 24-70mm Nikon mount will start selling at the end of June and the Canon mount in July.