The Sony 28-135mm f4 power zoom lens has been firmly on our radar ever since we first saw a prototype back at IBC show in 2014. I was lucky enough to shoot with the prototype lens on the Sony FS7 in September last year and have been waiting patiently for its release ever since. The 28-135mm is a full-frame power zoom lens that comes in kit form with the FS7 and also seperately. Although designed specifically to compliment the Sony FS7 I feel the lens is better suited for use on a camera with a full frame sensor – specifically the a7S.

I’m not suggesting that the optics of the Sony power zoom will have the same level of performance as those other lenses, but the Sony 28-135mm lens does create a very nice image when coupled to the a7S. It may not be as sharp as a top flight cine zoom, but for a zoom lens with this sort of range it is quite impressive. The lens is designed to communicate with the camera’s processor and corrects for things like chromatic aberration, barrel distortion and vignetting. Because the lens only fits onto E-mount cameras it is hard to judge the true optical quality – but in reality this is less important because its the final image recorded is what counts. The ability to correct electronically in camera is one of the biggest strengths of the Sony system when using their lenses on their cameras.

Parfocal lens:
One of the great things about this lens is that it is parfocal – i.e. it maintains focus though out the zoom range (except in close up). Although there is a full manual zoom mode it still uses the servo motor to move the lens elements internally. You can’t make crash zooms and the lens zoom won’t move any quicker in manual mode than when in servo. See my videos below for more information on the zoom features:

Close focus:
The focus works much like the old servo zoom lenses that used to come on the Sony EX1/EX3. There are Full MF or AF/MF modes available. In Full MF mode the minimum focus distance is 0.95m, if you put the lens in AF/MF mode and manually adjust it you can get close focus down to 0.4m as long as you keep the lens at the 28mm setting. The continuous auto focus is a bit hit and miss as you will see in the below video.

Optical stabilisation system:
The lens has an image stabilize (OSS) works incredibly well on the 28-135mm. Whether you hand held or use the lens on a tripod the OSS makes a big difference. On the a7S, where rolling shutter is even more noticeable when using the lens hand held, the OSS really shines. The only trouble I find when using OSS when filming on a tripod is if you pan or tilt the image. It can be susceptible to a sort of floating effect (in common with other image stabilizing systems) and if you need to make these moves I suggest you turn it off. My video below shows examples using the lens with the OSS on and off:

Focal range:
Here is where using the lens on an a7S makes much more sense than using it on a APS-C/Super 35MM sensor camera. On the a7S you can switch between full frame and APS-C crop mode which gives this lens amazing flexibility. The 28-135mm in full frame becomes 42-202.5 mm in APS-C mode. On a FS7 or FS100/700 42mm just isn’t wide enough to use this lens in most run and gun situations – you really need to ability to pull back. On a Super35 sensor a lens starting at 17mm like the Canon CN7x17 makes much more sense for handheld work. That said the 28-135 remains a good option for interview and tripod work on the FS7.

Filter size:
The lens has a 95mm filter thread which will make it tricky to use filters – ND filters are a necessity outdoors with the a7S. Bower does make a variable ND filter for $95 US but none of the premium brands seem to make one. Your only other option is to go with a matt box and ND filters but this does add bulk and can slow you down.

Conclusion:
The Sony 28-135mm is a remarkable feat of engineering. It brings an ENG style level of operation to full frame Sony cameras like the a7S, as well as Super35mm cameras like the FS7, FS100/FS700. It is a massive step up from former Sony powered E-mount zoom lenses like the Sony E PZ 18-200mm f/3.5-6.3 OSS and the FZ mount Sony SCL-Z18X140 FZ Mount 14X Power Zoom lens which is now discontinued.

The price given the level of performance is very good. Some a7S owners may think the lens a little too big and heavy to use on their camera but I don’t see it as a problem. If you balance well it can be handheld even without a rig. For hand holding the lens on a a7S I put my right palm underneath the lens collar and use my fingers to operate focus, zoom and iris. With your right hand you can operate all the camera side settings. 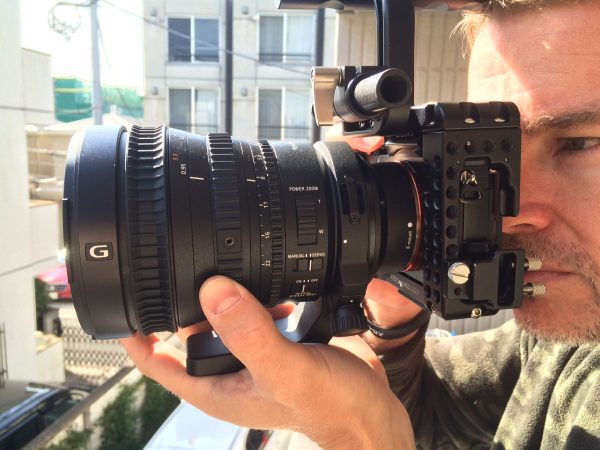 The positive aspects of this lens far outweigh the few small drawbacks of this lens. For $2500 it offers a level of performance and a feature set that was previously unobtainable for most shooters. I highly recommend this lens if your a Sony full frame FE mount camera owner.