The KiniMINI from Chinese manufacturer Kinefinity is a fully featured 4K cinema camera in a compact form factor. It has a near 35mm sized sensor and can record 4K RAW DNG files to an internal SSD drive. The sensor and has a claimed thirteen f-stops of dynamic range.

Shooting 4K RAW files can be cumbersome and requires lots of disk space but the extra image data can have big advantages for VFX and post work. I caught up with DP and VFX supervisor Rob Bannister who bought the camera for his work. He has worked on such movies as Limitless, RED, and Invictus. In the video below we talk about his experiences using the KineMINI:

Rob also talks about his Metabones Speedbooster that was specially modified by Dog Schidt Optics to enable him to get a near full-frame look. It adapts Canon EF mount lenses to the KineMINI’s native sub PL mount. The modification is based on a regular EF to E-mount Metabones Speedbooster Ultra but with a PL mount added to it can fit onto the KineMINI. A word of caution – Like the Sony F5 and F3 the sub PL mount on the KiniMINI does not directly take PL lenses – it needs another adapter for that. Trying to attach a PL lens directly will likely damage the sensor. 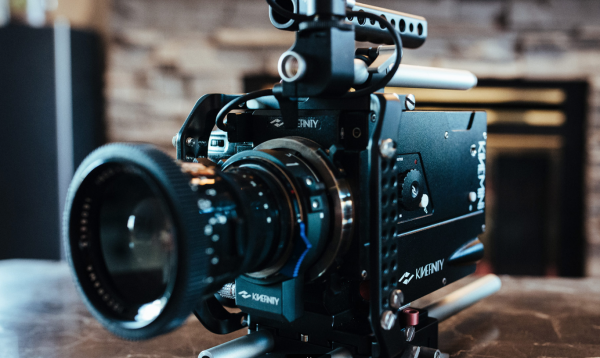 The modified Metabones adaptor was engineered so Rob could remove the modification and use it as originally intended on an E-mount camera if needed. Infinity focus can be maintained with the adapter thanks to the ability to move the element in it.

The KineMINI has a crop factor of slightly more than Super35 so once the Speedbooster is mounted it gets you closer to full frame. A same lens can now be used to give near full frame with the Speedbooster, Super35 and also S16 (by using the KiniMINI’s crop mode).

Below are some videos and tests shot with the Kinemini 4K.