Sony have given users of the F5 and F55 some new options this morning. While the big news is clearly the FS7 launch, owners of the older cameras may still have reason to pay attention.

After the recent enabling of 4K on the F5 via a simple All File modification from Paul Ream, Sony have seen fit to offer an official path to 4K with the CBK-55FX upgrade. Of course this isn’t free and Sony want to charge owners $998 US when the upgrade becomes available in December. How users will react is unclear given that many are already shooting 4K ‘for free’.

Version five firmware for the F55 and F5 brings simultaneous recording with HDCAM SR and MPEG 50Mbps 422 and also some much needed time-lapse options.

The CBK-55BK ‘Doc dock’ finally gets a price and a subtle redesign since we last saw a prototype. Priced at a not inexpensive $7999.99 US the redesigned module now accommodates the AXS-R5 RAW recorder if needed. It surely won’t be lost on many users that this dock alone costs as much as the new FS7 camera body. 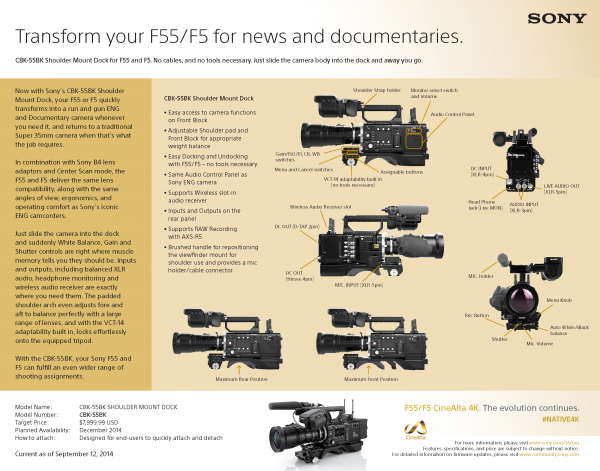 Lastly Sony have announced the availability of ProRes and DNxHD recording options for the F5 and 55. This is done by adding in the CBKZ-55PD option board which has the target price of $2250. This price may leave some users thinking it may be better to keep using an external recorder instead.

We are excited to announce significant new updates and enhancements for both the F5 and F55 CineAlta 4K camera systems. As you know these cameras have benefited from an assortment of accessories, and a long and very rich firmware development timeline that has seen powerful new features implemented at no cost to the end user. These ongoing efforts have made them amongst the most advanced motion picture cameras available today

Continuing this tradition and further reinforcing our commitment to these cameras, there are several important announcements. All of the information below is detailed in our new charts

Our rich firmware development timeline continues with the introduction of version 5.0. This update has a number of powerful features such as interval recording (time lapse), simultaneous recording with HDCAM SR and MPEG 50Mbps 422, and much more. Version 5 is required in order to utilize everything explained below. Please refer to the v5 chart for more detail

After significant feedback from people in the industry, many of whom were shown the preliminary design, we are excited to announce the newly designed ENG/DOC shoulder mount unit for both the F5 and F55. You can easily transform your F5 and F55 into the perfect Documentary and ENG run-and-gun shoulder mount camera by simply docking the camera body into the unit, no cables and with no fuss. The new design includes support for the AXS-R5 RAW recorder. A detailed chart explaining the CBK-55BK is below.

The F55/F5 cameras have established codecs including 10 bit XAVC™, HDCAM SR® 444, 422, MPEG 50Mbps 422, and 16-bit RAW via the optional AXS-R5 recorder. By popular demand, we are implementing Apple® ProRes and AVID® DNxHD® encoding via an option board to be installed at the Sony service center. SxS Pro+ and XQD S-Series and G-Series media are supported for recording.

This optional hardware upgrade will offer even more flexibility in the workflow, allowing users to stay in ProRes or DNxHD throughout the entire pipeline, if they so choose. Please refer to the codec chart below for more details

As you may be aware, some users are able to modify the All File of the F5 to enable 4K XAVC internal recording. This modification is not authorized by Sony and may cause unforeseen operating conditions as a result of the F5 not being programmed by Sony to perform the 4K recording properly.

Due to the widespread adoption of 4K in the marketplace, and to further protect customers’ investments in the F5, Sony is implementing 4K internal recording and 4K output capabilities by way of an optional upgrade program.

We are happy to announce the CBK-55FX, a 4K Upgrade Option for the PMW-F5. Installed 4K capabilities are XAVC 4K/QFHD recording and playback, 4K SDI and 4K HDMI Output and Simultaneous recording (XAVC 4K or QFHD) with MPEG 50Mbps 422. This option will be activated by license key which will be purchased and installed by the end-user. Further details will be provided shortly