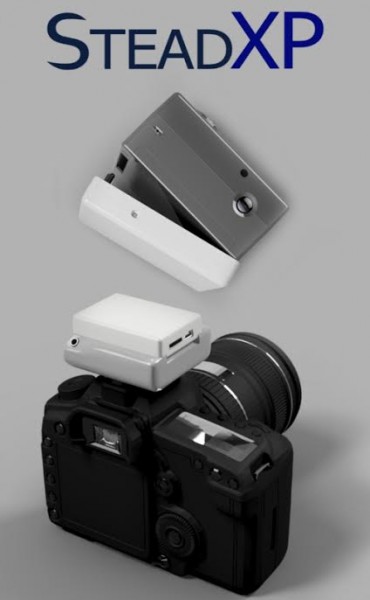 Imagine if you could get silky smooth camera moves or hyperlapses while running, walking, biking, or skiing with your existing camera without the need for a Steadicam or a brushless gimbal. That is the aim of a new device called the SteadXP.

The SteadXP is a small box that sits on top of your camera and connects to the composite output and mic inputs. The box collects data from its in-built high grade gyroscopes and syncs it with the video recording.

The really clever part occurs after you finish shooting. The footage is run through post processing software which transforms your wobbly footage into something much smoother. This is not a simple post crop and reframe, or a better version of Adobe’s warp stabiliser. This is a far more complex 3-axis transformation that involves the reconstruction of parts of the frame. This is known technically as computational photography, where elements of the frame are interpolated or constructed from the originals. To do this the SteadXP algorithm builds an optimised smooth camera trajectory and then constructs frames around it. It also attempts to fix rolling shutter issues. Having the motion data from the device in sync with the video is what makes this all possible.

There have been several other complex software image stabilisation systems shown recently – notably from Microsoft and Instagram. In the case of Microsoft their system still seems to be at the lab stage. Instagram is primarily designed to work with smartphones. SteadXP is designed to work with regular cameras and looks like a nearly ready for market product – as such is probably far more exciting for filmmakers.

One obvious question is whether you could use the accelerometers and gyros in a smartphone to do the same thing as this box? SteadXP developer Adrien Farrugia says that the box uses very high quality gyroscopes to do its measurements. He claims it is currently isn’t possible to do the same results with a smartphone.

Obviously this kind of software will require a pretty speedy computer for post processing. Don’t expect complex transformations like this to be quick on anything but the latest machines. That said, Farrugia claims SteadXP’s software is “a lot faster than existing plugins, because the treatment is not image based”.

I’d like to see how well this actually works in the real world but the examples so far look impressive. There is obviously going to be some resolution loss when doing this kind of complex image stabilisation in post – but with the advent of 4K cameras like the Panasonic GH4 it seems likely that a good end result is possible in HD.

The creators of SteadXP are hoping to bring their product to market as soon as possible and are likely to start a crowd funding campaign in the near future. For more info head over to the SteadXP website.