It had to happen sooner or later. Most popular camera top HD monitors until now have had a maximum resolution of 1280×720, but with consumer tablets like Amazon’s Kindle HDX now sporting higher than 1080P resolution it was only a matter of time before professional monitors caught up. 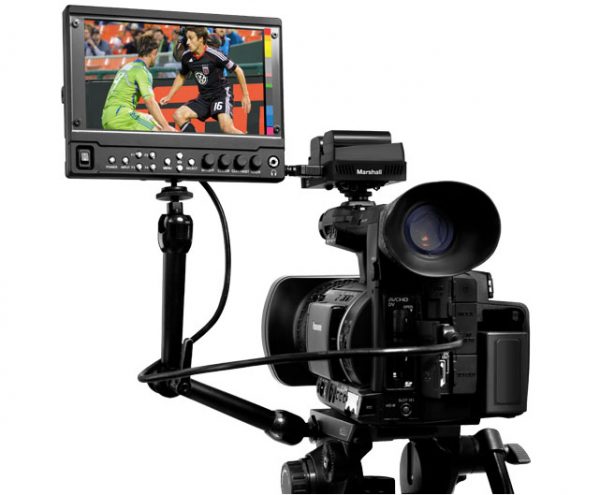 Marshall’s new V-LCD71MD is a 7 inch camera top monitor with a 1920×1080 resolution and a contrast ration of 800:1. The display is of the backlit IPS LED variety. It features Marshall’s modular input and output system so it capable of HD-SDI as well as HDMI with the correct adapter.

Brightness is very high (700-nit) and it is of course adjustable. There are on-screen waveform, zebras and audio level meters too. In addition there is a manual gamma adjustment but it is not clear how customisable this is.

The screen shares a similar design to others in the Marshall family and is 1.1” deep. There is a headphone jack on the monitors front facia which is a nice touch. The now standard aspect ration adjustments for older DSLRs like the 5D mkII is also included. Power is from 12V or one of Marshall’s battery plates.

The monitor has a custom pixel-to-pixel mode. Given that the monitor is displaying full HD, an actual actual pixel mode wouldn’t change magnification at all. It appears that you can select which area you want magnified and zoom in on it. This is something I would like to test to see how it works.

The Newsshooter team will be checking out the V-LCD71MD and the competition from the likes of SmallHD and Ikan at NAB next week. It will be interesting to test how much the extra resolution actually aids focussing.