Newsshooter.com has followed the development of Kinefinity’s cinema cameras for a couple of years now, as they attempt to compete against the big boys like Sony, Canon and Panasonic as well as their closest rival Blackmagic Design. Since we first saw their prototype camera at a Chinese camera show the cameras have improved no end. They have reached a point where they are workable production tools with some unique features. But now Blackmagic Design have their 4K Production camera and the Panasonic GH4 is just around the corner, what can the Chinese maker do to respond?

Today we got their answer with the launch of two new cameras – the first is their new Super35 4K capable KiniMINI (the second is the 6K MAX, more on which in my next post). It offers 4K RAW recording up to 30fps in compressed DNG or uncompressed DNG. Possibly more interesting to news and documentary shooters is the inclusion of in-camera 2K Cineform RAW recording – with smaller files and greater compression than DNG, but still with many RAW processing options.

Apart from 4K and 2K RAW the camera can also record 1080p, 720p ,480p in 16×9 and also 2.39:1 format. Impressively the camera can continuously record slow motion at 100fps in 1080P HD mode (96fps in 2K Cineform RAW). This can be recorded from the full sensor and not just in a crop mode. Talking of crop modes there is also a crop mode to use B4 ENG lenses on the new MINI when you attach them with a special B4 mount.

The OLPF filter has been redesigned for 4K and is said to give good 2K results also. Kinefininty claim almost no moire patterning at either 2K or 4K. Colour science is also said to be improved over their previous cameras.

The camera records to SSD drives but for 4K RAW the company is recommending its own KineMAG drives because of the high date rates. 2K may be possible using cheaper off-the-shelf drives but this is not endorsed by Kinefinity.

Monitoring can be done via SDI or HDMI but these outputs are not intended for external recording or live feeding – unlike those on competing Blackmagic Design cameras. There is no audio embedded on the SDI or HDMI either. Monitoring can be either in Log or with a REC709 simulated lookup.

Integrated Wi-fi control is also available with the possibility of a built-in wireless video feed from the camera also being touted. 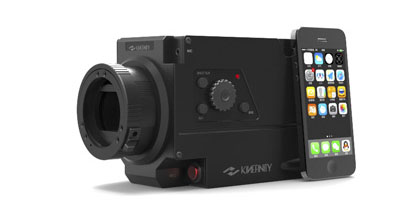 The company is calling this camera part of their Kine Hybrid System and is not to be confused with the existing KineRAW-MINI, which the new system replaces. There will be an upgrade scheme for owners of the original KineRAW-MINI (Kinefinity had originally said they would offer 4K on the KineRAW-MINI with an external recorder but plans for this quietly been dropped in favour of the new MINI).

Many of the other features and the overall design remain similar to the original KineRAW-MINI. The body is only 15mm longer than the original.The sensor is apparently the same one and it is the camera processing that has been upgraded to make the most of it. That means that the dynamic range should remain around thirteen f-stops in 2K mode – slightly less in 4K (no spec officially published as yet). Rolling shutter should remain similar to the KineRAW-MINI, that is to say it isn’t great but workable is many situations. The internal fan is said to be quieter on the camera.

The lens mount is the same as before with option for electronic EF or dumb Nikon, PL and B4 offered. One great feature of the Kinefinity EF mount is that in is now lockable in a similar fashion to the Canon C500 EF version. This solves one of the major drawbacks of using EF lenses for video – the slight play that exists between body and lens resulting in occasional movement when focussing, especially with follow focus units. The locking mount is incredibly secure and is something Canon themselves would put on the C100 and C300.

Audio is one area that is unimproved from the older camera. There is still only a single 3.5mm jack and no XLR connection. There are limited audio controls and no ability to lock timecode with an external audio recorder meaning that over time picture and audio may drift out of sync. This is the single biggest drawback for documentary shooters in my opinion.

Also missing is any sign of built-in ND filters – although this is something not typically found on cameras that this price.

Existing accessories from the KineRAW-MINI will also fit the new MINI.

Pricing is not yet announced but upgrade costs to the new MINI from the old KineRAW-MINI have – for old MINI users who bought the camera with promised 4K or RAW options the upgrade is $1990 US and for those who didn’t it will cost $2590 US.

The original larger KineRAW S35 camera, which was the company’s first, has not been left out either and can be upgraded to 4K and high speed too for $1990 US. It’s good to see owners of the older cameras are not forgotten.

The KineMINI should be on show at NAB 2014 in Las Vegas and according to the company available to buy around the same time.