How many C100 users are out there? I’m hoping at least 170, because that’s approximately how many more Kickstarter pledges are needed for all of us to get a custom eyecup to make our lives better. Here’s the campaign for the C-Cup – https://www.kickstarter.com/projects/1841005141/c-cup-improving-the-viewfinder-of-the-canon-c100

Why is a custom eyecup a big deal for C100 shooters? Because out of the box the C100 viewfinder is painfully hard to see. For doc shooters, the beauty of the C100 is its ergonomics and usability – a simple, functional, lightweight camera without a hundred accessories hanging off the sides. For me that usually means shooting on either completely handheld or on a tripod, setting aside my shoulder rig and video monopod. 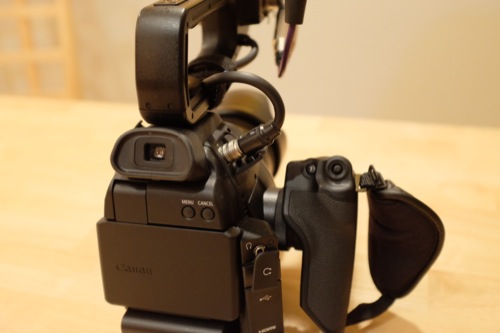 With a good Image Stabilized lens the C100 handheld is wonderful handheld, but for the setup to really work you need an eyecup placed over the viewfinder. It is needed to block out the light, give the camera a better point of contact with your face and to generally make it more comfortable to use. A few options already exist each with their own their ups and downs. 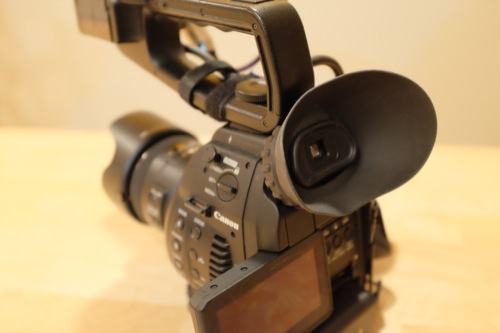 This eyecup fits nicely over the C100 viewfinder, and it does block out light, but it’s a little too thin and flexible. So when you try to use it as a point of contact the eyecup folds back on itself. 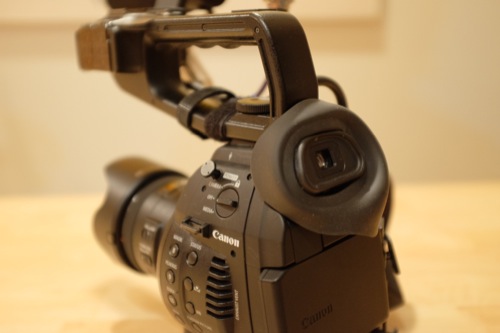 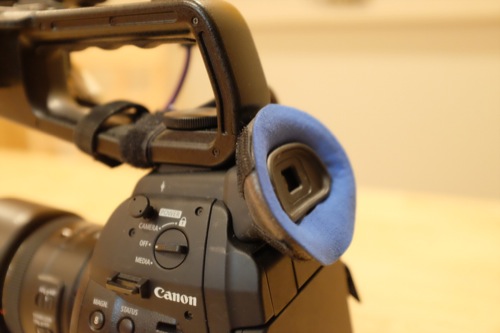 This eye cushion also fits nicely and tends to fall off less than the Zacuto eyecup. It also works as a better point of contact but it’s a little too small to really block out light effectively or be comfortable for extended use. Your eye still presses against the hard C100 viewfinder. 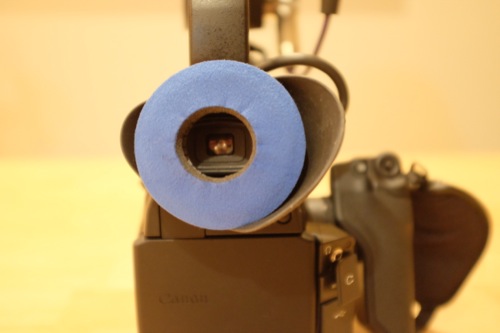 Together this makes for a pretty good eyecup. However, you’ll have to find a good glue solution to keep them together, which can be a problem when the Zacuto folds back on itself. My own method with velcro failed miserably, making it uncomfortable and destroying the Blue Star in the process. 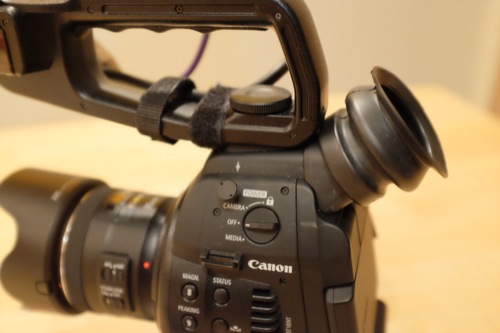 Although a little spendy, this eye cup is really nice. It fits snugly and doesn’t fall off whenever you pack the camera away or take it out. It’s sturdy and makes a great point of contact and the viewfinder area is pretty big. The downside is your eye is too far from the viewfinder image. 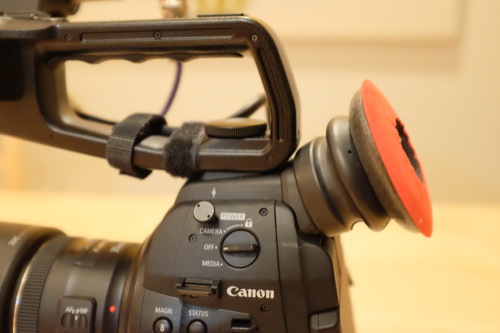 If the Kickstarter campaign for the custom C100 eyecup doesn’t succeed then this combo is your best bet for an eye cup. It’s really comfortable. But there are a couple of downsides. Although the IKKUP stays on the C100 the Blue Star cushion can easily fall off the IKKUP end. Some sort of glue should help. This eyecup combo creates an even longer tunnel between the C100 viewfinder image and your eye so the image is harder to see. You have to be careful to keep your eye centered when you’re looking in. 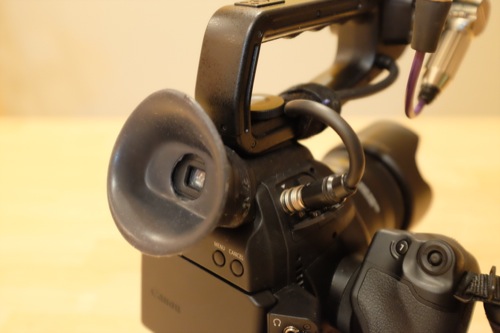 I’ve been sent a pre-production C-Cup to test. Its creator Andrew Miller is soliciting feedback before making and sending out the final version if the Kickstarter is successful. Here is what I’ve found so far:

The C-cup is made to fit the C100 and it does this well. It is solid enough to for a good point-of-contact and your eyes can get optimally close to the viewfinder image. You don’t fell like you are looking through a long tunnel and it blocks out light perfectly adequately. It’s also large enough to fit glasses wearers – which is an issue with other eye cups. 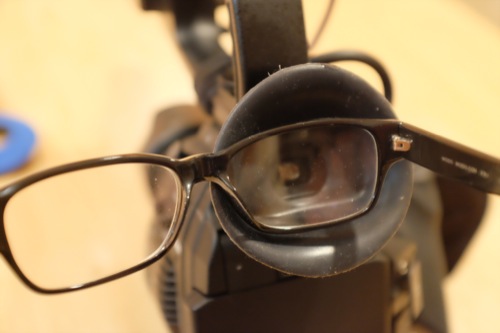 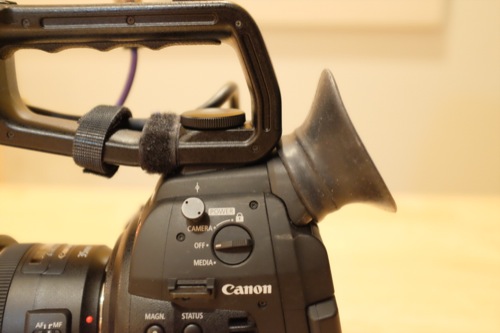 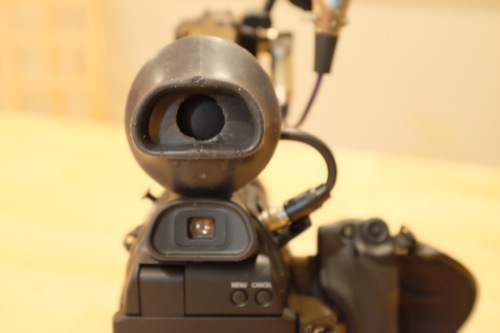 1) The pre-production C-Cup falls off the C100 too easily – not as much as the Zacuto, but it doesn’t stay on as well as the IKKUP or the Blue Star. I think it’s an easy fix – because the C-Cup is divided into two sections, one part that goes around the C100 viewfinder, and one part that’s the eye cup, I’m thinking the C100 part could have some sort of sticky or reinforcement to keep it on. 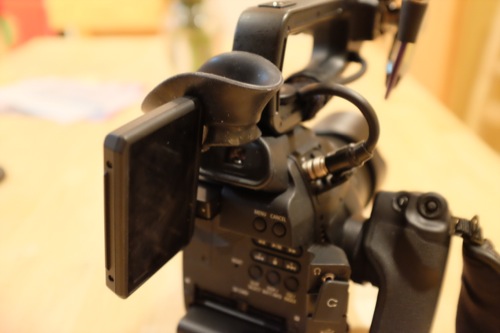 2) When you open the LCD screen it wants to pull the C-Cup off. This is something I don’t think can be avoided unless the C-Cup was more solidly connected to the viewfinder. Maybe the bottom of the C-Cup could be slightly thinner so that it would more easily get out of the way of the LCD screen as it articulates.

There are advantages and disadvantages to each of the current eyecup solutions. There are other options C100 users have explored but the above are the most popular options I’ve seen on C100 forums. In the end I hope the final production version of the C-Cup will be the answer we’ve all been waiting for.

Slavik Boyechko is a documentary filmmaker and Digital Media Director at Alaska Public Media, where he develops TV programs and shoots and edits the PBS Digital Studios series INDIE ALASKA. He maintains a blog at alaskavideoshooter.com and you can follow him on Twitter @akvideoshooter.