I’ve been working in RTE, the national broadcaster of Ireland for 16 years. I started in Broadcast engineering before moving into technical resource management in News and then eventually into training and innovation. Over the last three years I’ve been researching and testing a variety of consumer technology devices to assess their potential for broadcasting and news gathering.

In 2001 I was part of the team responsible for the introduction of Video Journalism to RTE.

In 2006 I completed a BBC Train the Trainer course and I’ve been delivering training courses in VJ, DSLR Video Production, Photography and more recently Mobile Journalism.

As each of the production methods I’ve mentioned have come to the fore, there have been a series of reactions from people which seem to repeat in cycles. As a result people faced with the introduction of this new technology usually fall into one of the following categories:

The Evangelist
Sees the potential in every sense, cost savings, accessibility, production opportunities and revenue but tends to ignore the short comings in a rather obstinate way.
Catch Phrase: “Fire everyone – all we need is this and a body, any body”.

The Champion
Has a balanced approach to new technology, sees possibilities and shortcomings but is willing to try and test to its limits then evaluate and decide on use models. If potential exists will seek to exploit it but based on clearly defined limits.
Catch Phrase: “Its another tool in my toolbox – has strengths and weaknesses – that’s OK”.

The Pragmatist
Realises resources and revenue are constrained and looks to the potential from a mainly cost-saving perspective versus the need and demand for content. Will quickly abandon if alternative is provided.
Catch Phrase: “I’ll use it if I have to-but only if I have to”.

The Nonchalant
Sees new tech as an additional responsibility, not a tool with potential. Feels they are busy and efficient enough already – they don’t need the distraction of new skills and responsibilities and certainly won’t propose themselves for the training.
Catch Phrase: “More workload, more responsibility – nothing back. Why bother?”.

The Nay-Sayer
Believes that the way things are created now, the structures, hierarchies, workflows and systems are complete and anything that challenges them should be eradicated through direct debunking and criticism and/or aggressive union action.
Catch Phrase:”Over my dead body -C’mon lads lets sort this out”.

There may well be other categories that I have yet to encounter, but if you have suggestions then let me know. Irrespective of which (if any) you feel inclined towards, video journalism is still an everyday fact in newsrooms all over the globe – and in most cases it co-exists (often in harmony) with the traditional roles of ENG and EFP cameramen. It, as with every production method, has its strengths and weaknesses and, though I absolutely accept the “two people are better than one” argument, I still strongly believe every production method has its place and more importantly it should not be at the expense of other methods.

Mobile is, to a certain extent, the new kid on the block. Its only in the last 3-4 years that smartphones, networks and device penetration have reached a point of ubiquity to drive mobile journalism forward. In my experience “mobile” is now a hotly debated topic in many newsrooms. Part of this is that everyone is scrambling to get a slice of the growing mobile viewing audience who use YouTube, VOD, player services and social media video to consume content while on the move. But that’s just part of the equation: the content delivery side. There is another area of mobile which is a source of huge potential for news-gathering and also one of the most underestimated resources, one which I have sought to tap into in the last two years.

I started the RTE mobile journalism project by testing Apps and Hardware accessories to see what you could to do augment the basic facilities on the smartphone. I tested a HTC Desire (Android) and an iPhone 4 at the time. It became apparent quite quickly that a lack of pro-grade Apps was a substantial handicap for Android. Market fragmentation, the fact that Android is open and can be customised by each device manufacturer means there are a lot of “flavours”. Add into that equation the fact that there are over 11,000 Android devices, including Smartphones, Phablets and Tablets and that makes it extremely difficult for an App developer who intends to leverage hardware like the camera and CPU to guarantee their App will work across a broad range of devices.

iOS on the other hand had quite a number of interesting Apps with Pro-grade features. This applied not only to photography Apps, but also to Audio recording and editing, Video recording and video editing. During the project I tested in excess of 1000 Apps! I then whittled the list down to my favourites and shortlisted it to my essentials:

Once I had identified my preferred Apps I then set about testing a wide range of accessories. After 6 months of field trials and real-world testing I selected the following hardware accessories for the project. 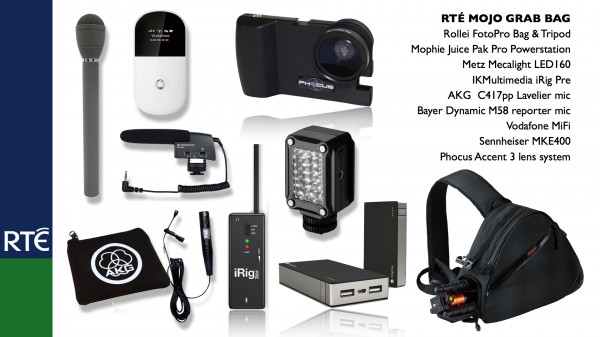 The next phase then was to create a training programme to show journalists how to leverage their iPhones for content creation. To date Over 120 RTE staff have completed the one day introduction course, and as recently as last week the first batch of mobile journalism “champions” completed the first four day Mojo masterclass. Two of the participants from the masterclass were current VJs – Philip Bromwell shot the video Viking House at the start of this blog post. He also the Dublin Dockers piece below. Both were shot on iPhone and edited on Avid Media Composer

What I have found interesting over the last 2 years is the various mobile acquisition strategies adopted by different broadcasters. Some have chosen to focus on the “camera in your pocket” / breaking news / “run-and-gun” model where they encourage journalists to shoot some short clips and send them back to base for editing and online, usually with the use of little or no accessories.

Others, like RTE have adopted both this and a more advanced methodology which allows journalists to perfect their skills and really learn to leverage the full potential of the device. Interestingly a recent twitter discussion about the merits and limits of mojo highlighted the dynamic set of views and opinions about this tech. Unlike Video Journalism, the workflows and usage for Mojo are relatively easy and intuitive- making it more accessible to “non-technical” staff. My opinion is if a journalist can create a story that is of high enough quality so the audience cannot tell its shot on a smartphone then they have reached a rubicon which makes the run-and-gun stuff or multimedia stories easy by comparison.

RTE have been using LuciLive for Radio lives for over two years now. The next Phase of the project is to move into live video streaming from the iPhone. Quicklink Ltd, a company in Wales have provided our IP delivery and streaming solution for ENG crews in the field for the last 5 years. They also have a dedicated iPhone app called Quicklink LNG which will stream to a server in our station and send return IFB over the same path. We have been testing for months but we decided to wait until the roll out of 4G mobile networks in order to avail of the greater throughput speeds. 4G is now officially launched and the amount of sites upgraded is growing relatively rapidly. As a result RTE will start a structured testing phase for iPhone live crosses in the very near future. SkyNews and BBC to give them credit have been active in this space for the last few months and you can see some good examples of use on the DejeroLabs YouTube channel: http://www.youtube.com/user/DejeroLabs

Is the iPhone, or any mobile device a suitable replacement for an ENG crew? In short: NO. But it can offer another content creation method and with a few cheap accessories it can create high quality stories, particularly in the hands of skilled journalists. News and the way it is consumed is changing rapidly – social media is a direct competitor for online news sites and both are slowly cannibalising the market share for linear over-the-air broadcasts.

The opportunity we have as broadcast news organisations is to participate in that new dialogue with our audience, to embrace change and to engage using the unique attributes we have: quality, credibility, integrity, trust and verification. How we create content and how we deliver it for that matter is up for grabs, but I give strong credence to the thrust of Kevin Spacey’s keynote at the Edinburgh Television Festival. “Let the audience decide”…who, what, when, where, how – “just give it to them”.

Glen Mulcahy is Innovation Lead with RTE. He blogs about technology at http://tvvj.wordpress.com