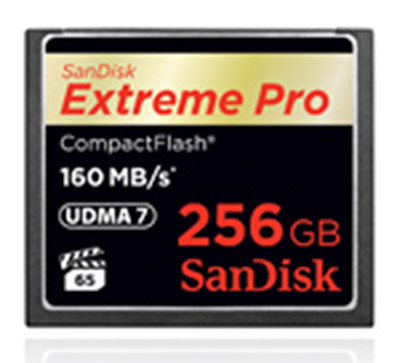 Sandisk make some of the fastest and most reliable memory cards currently available. Today they announced that their Extreme Pro range of CF cards are to gain even higher read and write speeds. The company claim they are optimised for 4K video capture with up to 150MB/s write speeds and a minimum sustained write speed of 65MB/s. (Cards with capacities from 16-128 GB write up to 150MB/s and the 256GB card is claimed to be 140MB/s.) Read speeds are said to be 160MB/s Read (1067X).

That said very few 4K cameras can use these cards – most use proprietary cards or external SSD recorders instead. Maybe Sandisk expect the market will be filled with 4K options in the near future.

My Canon 1D C which does need high speed CF cards seems to work fine on the outgoing generation of 95MB/s Extreme Pro cards and I can’t imagine there will be too much gained apart from possibly faster offloads. Similarly HD cameras like the C300 work just fine on vanilla Sandisk Extreme 60MB/s cards so all that is gained is faster offload.

Users of the Magic Lantern raw for the Canon 5D mkIII are more likely to take a keen interest in these cards because of the high sustained data rates the hack requires. It will be interesting to see if the cards can help make the hack more robust.

Here is the release from Sandisk:
Get high-capacity storage, faster shot-to-shot performance, and cinema-quality video with the SanDisk Extreme PRO CompactFlash Memory Card. With transfer speeds of up to 160MB/s, this card offers the fast, efficient performance you expect from the global leader in flash memory cards**. This industry-leading memory card is optimized for professional-grade video capture, with a minimum sustained write speed of 65MB/s for rich 4K and Full HD video. Capacities up to 256GB accommodate hours of video and thousands of high-resolution images. So you never miss a scene or shot, this memory card resists extreme temperatures, shock, and other conditions.

1.Designed for professional videographers and photographers
2.Optimized for 4K video capture**
3.Transfer speeds of up to 160MB/s for burst mode photography
4. Shot speeds up to 150MB/s
5. VPG-65 for sustained video recording speeds of 65MB/s**
6. Capacities up to 256GB for storing hours of video**

You can find out a bit more about the cards on the Sandisk website.