I was in Ethiopia recently, as cinematographer for Talkingstick Pictures on a documentary about the transformation of Ethiopia’s agriculture system. Over the course of two weeks, I found myself shooting in a crowded marketplace in Addis Ababa, shooting oxen plowing through large dirt fields, and living with a small family in the countryside.

For this project, I chose to use the Sony FS700, a camera that features a super-35mm size sensor, built-in NDs, super slow motion, and wide dynamic range. The downsides of the camera are well documented: boxy ergonomics and ‘video-like’ image quality, especially when compared to the Canon C300. I’m writing this in hope that it might help future cinematographers considering the FS700 for documentary work.

Ultimately, what steered me to the FS700 over the C100/C300 was the ability to use the Metabones Speed Booster, an adapter for Canon EF lenses that gives an extra stop of light and the effective field of view of a Canon 5D (not the Super35 crop factor, as with the C300). For documentary hand-held work, I prefer to shoot with the Canon 24-105mm f/4 L IS lens, a beautifully sharp, smooth lens, with macro and image stabilisation. With the crop factor of the C300, the wide end is still quite constraining, and difficult for on-the-fly scenes but, with the Speed Booster, I was able to get the full 24mm field of view and the brightness of a f/2.8 aperture.

Once the camera was decided on, I was left with two main obstacles for shooting: focusing, and hand-held work. For focus assistance, I decided to use the SmallHD DP6 monitor. For hand-held shooting, I decided to give Borrowlenses’ FS100/FS700/F3 Zacuto system a try. I must give a big thank you to both SmallHD and Borrowlenses.com, who were both extremely supportive of the project, and allowed me to review the gear.

Handheld rig
The Zacuto rig I used is very solidly constructed. I decided to use it without the included counterweight, as I felt it was adding unnecessary bulk. I removed the handgrip arms and replaced them with a Zacuto FS700 grip relocator, which I had to buy separately. The grip relocator comes with a 12in LANC extension cable, which I didn’t find necessary. The rig also includes the Zacuto EVF, which I decided not to use. I wanted to make my set up as minimal as possible, and the EVF just isn’t big enough to use as a monitor. It also has an annoying half-second delay over HDMI with the FS700.

Monitor
The SmallHD DP6 is a beautiful monitor with both HDMI and SDI input, a 1280×800 display with peaking, FocusAssist+, and false colour on the ready. It also has an optional battery plate for Canon LP-E6 batteries and a sun hood for shooting in daylight.

I chose the DP6 over other similar monitors, as it was a relatively small size, but large enough to focus with, and I’d heard great things about the focus peaking. 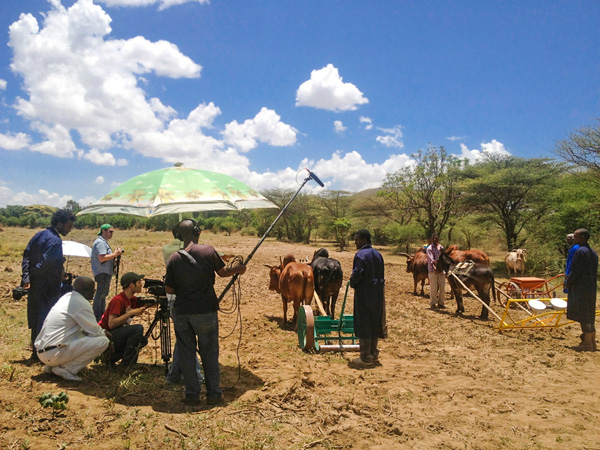 In action
On a tripod, the FS700 is brilliant. The dynamic range of this camera is fantastic, and the images are sharp, with accurate colours. I really can’t compare to the C300 until I’ve done hands-on tests, but I can say that I was really happy with the images. The AVCHD codec also holds up surprisingly well for colour grading, and just playing around with a few shots, I was happy with how much detail I could pull from shadows and highlights.

Handheld, the FS700 isn’t quite as wonderful. The rig is solid and well-built, and has lots of great options for moving pieces around. In preparing the camera/rig, I did my best to make it as minimal and balanced as possible, and I think I got very close to the ideal configuration. I was able to have my left hand on the focus/zoom and my right hand on the grip. There were times when I got along great with it, filming in tight, dimly lit interiors, where I could make smooth movements and think about what I was shooting. The rig went easily on and off the tripod, and wasn’t too heavy. 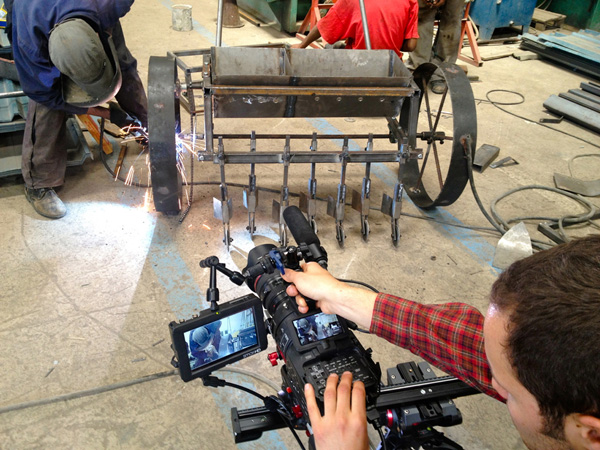 At the end of the day though, I still found it a bit unwieldy for long periods of shooting. In a couple situations, filming in crowded marketplaces, I found myself having to whip around quickly in the bright sun, having to readjust the monitor on the fly, while balancing everything on my shoulder. Nevertheless, it was certainly usable, and much, much better than using the camera without a rig. When handholding the FS700 without a rig, you’re forced to brace it against your body in an outward position, as the onboard LCD is awkwardly positioned on top.

In many ways, I would have preferred a smaller and more compact rig. If I had to pinpoint one area that could be improved, it would be the positioning of the shoulder pad, which just felt too far away from the camera, vertically. Next time I’d love to try out the FS700 Zacuto Shooter Kit on Zacuto’s website, which seems to place the shoulder pad closer and comes with the grip locator.

I absolutely loved using the SmallHD DP6 monitor. The focus peaking made focusing easy all the time. Whereas focus peaking generally means colour dots on in-focus areas of the image, SmallHD’s peaking boosts contrast and highlights edges of in-focus areas. I was worried it would be too subtle to focus correctly but I had almost no issues in the field. For situations where I was working with a really tight depth of field in a quickly moving situation (ie, subject moving toward camera at 200mm), I was able to put the monitor into FocusAssist+ Mode and pull focus much easier.

The two buttons on top can be easily used to toggle FocusAssist+ and False Colour, which is extremely helpful for quickly judging exposure.

It’s not a perfect monitor – the scroll wheel can be finicky, colours aren’t terribly accurate, even after tweaks, and the sun hood seems too large. However, it’s still a great choice – reasonably priced, and highly recommended. 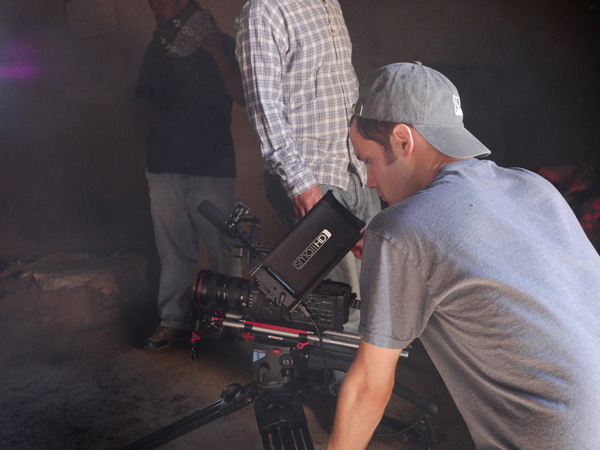 Conclusion
The Sony FS700 and Speed Booster are a fantastic combination. Having an extra stop of light and the dynamic range/sharpness of the FS700 provide for a really versatile setup and beautiful images. The low-light abilities of the camera are fantastic, and with the Speed Booster, I could shoot f/2.0 and f/2.8 on my zoom lenses, and rarely had to boost the ISO from its native 640. The slow motion (in a burst mode up to 240fps at 1080p) provides for great creative options that the C100 and C300 can’t touch (C100 has no slow-motion, and C300 is only 60fps at 720p.)

I was using my 5D Mk III as a B-camera, and the relative differences in dynamic range, detail, and usability were huge. Shooting on the FS700 is really just a joy, and I’m very happy with how the footage looks.

The stills from the shoot I think illustrate the camera’s dynamic range and image quality. These were shot with Cine 4 Gamma, and only slight contrast adjustments applied.

The Speed Booster proved reliable until the last day of the shoot, where it started to have a few glitches when changing aperture. Fortunately, it wasn’t a huge issue at that point, but worth noting. I also brought a Metabones Smart Adapter II as a backup adapter. The Smart Adapter II has the same features of the Speed Booster – electronic aperture control, image stabilisation support, etc – but keeps the native crop factor. I only used it when I wanted to utilise the crop factor and go super-telephoto.

By the end I was shooting almost entirely on tripod, slider, and jib, avoiding handheld. Handheld was certainly possible with the FS700, but not ideal. After a couple weeks of solid shooting, I still didn’t feel like the FS700 was an extension of my body, as it always felt a bit unwieldy. Some of the other rigs out there are definitely worth a shot, however. Next time, I hope to try to Zacuto FS700 Shooter Kit or MovCam rig.

Compared to the C100/C300, it’s still a slightly bigger camera and not as easy to run-and-gun with, but with the Speed Booster, it has huge advantages in the slow motion and field of view departments, and certainly worth considering if this fits your shooting style and types of projects. For me, the FS700 was a pleasure to use. 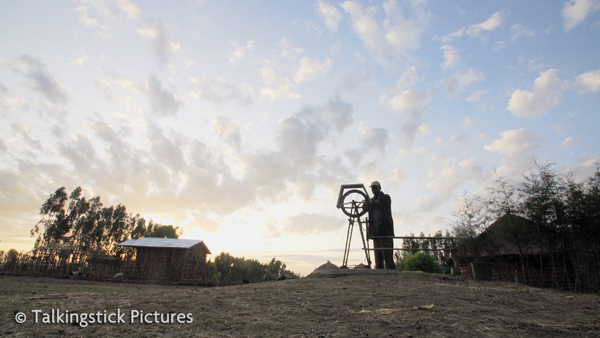 Sam Price-Waldman is a documentary filmmaker and cinematographer. From Ghanaian gold mines to the canopy of a redwood forest, Sam Price-Waldman believes in the power of a well-told story to stir conversation and create lasting change in the world. His films have shown on PBS stations and top film festivals around the world. Sam currently works as a freelance producer, shooter, and storyteller around the USA.