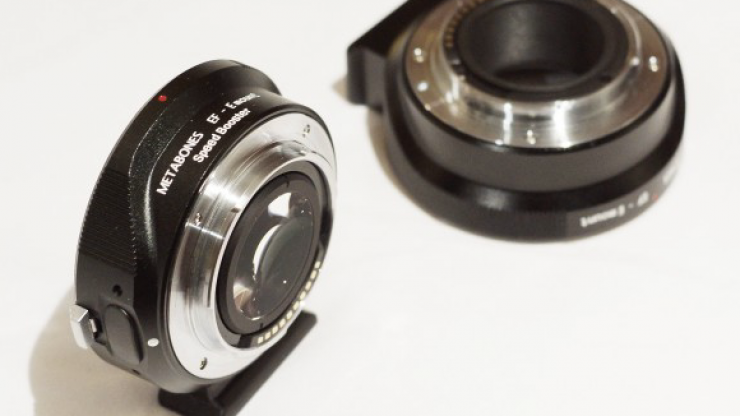 Even as a self-confessed camera geek it is usually difficult for me to get too excited about lens adapters. Yes there are adapters from Novaflex, Kipon and MTF Services that allow you to use old Leica lenses on Sony NEX mount or old OM lenses on Micro Four Thirds. These increase the appeal of the smaller sensor cameras but these are just metal brackets with enough space to correct for the varying flange depths. The new Speed Booster adapter from Metabones, however, offers something unique and exciting. The Speed Booster is essentially an inverse teleconverter (technically a Barlow lens arrangement) to a factor of 0.71x. This means that the image size is reduced by 0.71x, allowing more of it to fit on the smaller sensor, reducing the crop factor and providing more light on the sensor area.

This focal reduction process was not possible with APS-C DSLR’s like the Canon 7D, due to the mirror system. However, interchangeable mirrorless cameras and large sensor video cameras like the NEX FS100, FS700 or VG20 allow an uninterrupted path to the sensor and therefore allow the addional optics to be fitted successfully (Sadly it doesn’t look like this adapter will work on Cinema EOS C100, C300 and C500 cameras because even though there is no mirror the gap between lens mount and sensor still exists).

Focal Length
A standard 50mm lens via a regular adapter gives an equivalent focal length of approximately 75mm (full-frame equivalent) on an APS-C sensor body or 100mm (full-frame equivalent) on a MicroFourThirds body; using the Speed Booster adapter, Metabones claim, the lens gives a 53.25mm full-frame focal length equivalent on the same APS-C sensor, or 71mm on MicroFourThirds. Simply put – you should get a very similar look and magnification out of your full frame lenses used on a Micro 4/3 or NEX camera as you would with the same lenses on a full-frame camera.

Where this is really likely to come in useful is for wider focal lengths. Achieving anything truly wide with smaller sensors previously meant buying lenses specially designed for the APS-C or Super35mm sensor size. Now those full-frame 16-35‘s, 17-40‘s and 14-24’s which many shooters have in their bags can be used as true ultra-wide lenses again. It is perhaps a slight disappointment that the adapter doesn’t bring the lenses back to exact 35mm focal lengths – but this is certainly very usable none the less.

On both APS-C and Micro Four Thirds versions, the amount of light falling on the sensor increases by around a stop – hence the name Speed Booster – this is due to the light that would normally miss the sensor being redirected by the optics. So an f/1.2 becomes f/0.9, an f/1.8 becomes f/1.2 and an f/4 lens becomes an f/2.8.

As with a teleconverter this change in the amount of light hitting the sensor does not equal a change in the actual depth of field. So a 24-105mm f4L lens fitted to a Sony FS700 or other NEX camera and set at f2.8 on the camera (the adapter automatically adjusts the displayed aperture with most EF lenses) would have the same amount of depth of field as a 24-105mm set at f4 on a Canon full frame camera like the 5DmkII. You would not get the equivalent look of a f2.8 lens on a full-frame body.

Lens mounts
The adapter will be available initially in Canon EF to Sony NEX mount. A dummy Canon EF to Micro4/3 will follow shortly after along with Nikon to NEX and M4/3. Plans for Leica R, Contax C/Y, Contrex and Alpha lens adapters are underway.
Due to the reduction of the image size using the adapter, a full frame lens is required to fully cover an APS-C sensor. However, for Micro Four Thirds sensors, a digital only (EF-S or DX) lens can be used. So when the Micro 4/3 version becomes available popular zooms like the Tokina 11-16mm, (Metabones have informed us that Canon EF-S lenses won’t physically fit on the adapter, Nikon and Tokina lenses should work) and Nikon 17-55mm f2.8 will regain their wide-angle look.

Image Quality
Metabones also makes some bold claims about the Speed Booster’s image quality. The adapter has been corrected for field curvature, coma, astigmatism, distortion, and chromatic aberration, leaving a small amount of spherical aberration, it says, to improve Bokeh at its maximum aperture. Interestingly the addition of the adapter is believed to improve MTF figures (a claim that is hotly contested). Metabones states in its white paper on the adapter that the concentration rather than magnification of the image results in lesser aberrations and increased contrast.

The adapter features a removable tripod mount and in the Canon EF version, allows electronic iris control, AF and Image stabilizer functionality. The unit price and availability are still to be confirmed but we already have our hands on a preproduction sample, so expect to hear more on the Speed Booster soon. Initial tests have proved positive but please wait until we have had a chance to evaluate it further.

The Speed Booster is not to be confused with the existing Metabones EF to NEX Smart adapter which while looking similar does not have the correcting optics.

A full white paper about the adapter is available for download from Metabones here.

Below are some sample still images shot by site editor Dan Chung using a prototype Metabones Speedbooster in a non scientific test (Click to zoom):