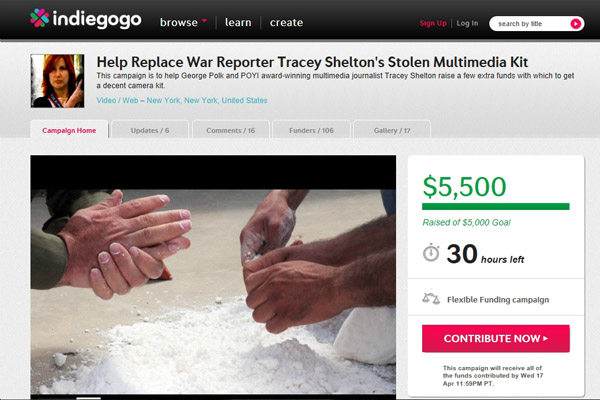 As we reported back in March (see here), Tracey Shelton was in desperate need of replacing her aging camera equipment to continue to report from war-torn locations such as Aleppo. After reading the post, two Columbia J School grads, Mayeta Clark and Nick Stone, set up a crowd funding campaign to raise enough money to buy Tracey some decent kit. Her original budget was just $2000 so the group, who had never met Tracey, looked to raise another $5000 to provide a solid photo and video kit.

The great news is that, still with time to go, the target has been reached and Tracey has her new kit. Talking to us just hours before she headed back to Aleppo, Tracey added the following:

‘First, a HUGE thank you to everyone who donated. It was so overwhelming to see the response. Mayeta Clark, Nic Stone and Frederick Bernas had never even met me before starting the campaign and they worked so hard on this as I was rushing madly across the East coast trying to fulfil all of my commitments for a 2-week trip. I never would have started something like this for myself. I’ve always just made do with what I have. To see the generosity of everyone is incredible!

‘We surpassed the goal so with my savings of $2,000 added I managed to get everything in my option1 wish list including the Canon EOS 5D Mark III. I also picked up a LED light, new tripod and a 24-70mm L Mark 2 (second hand). This was quite expensive but it is lighter and so nice that I decided to splurge on this one and stay with my old 100-300mm zoom for now, as I really don’t use it that much. I plan to pick up a second hand 70-200 f4 at some point down the track.

‘In addition to the funds raised, Juan Hamparzumian sent me his 1D. He recently upgraded to the newer model and mailed it all the way from Mexico City to New York. This is possibly the most expensive chunk of equipment I have ever held in my life. I will be looking forward to using this in Aleppo where I have a home base to store extra gear.

Richard Scott sent me his old 50mm f/1.8 lens all the way from Canada, and Matthew Monroe of NastyClamps.com mailed a set of very handy camera/lighting/mic clamps to add to my kit.

‘I also need to mention Jason and Corey of CombatMedicalsystems.com who put us over the top with an incredible donation, as well as the 100 other donators. I wish I could mention them all by name but that would be going a little too far.

‘We still have another day to go and everything remaining goes to RISC – a training program for war reporters in battle field first aid. It is run free of charge and is a fantastic program. I’d love to raise enough to replace the funds they spent training me on this recent visit. I can’t tell you how valuable the course was. I would definitely encourage any war correspondent that hasn’t done it yet to apply.

A huge thanks to Newsshooter.com where all of this began and to everyone who gave advice on this blog. It was invaluable!’