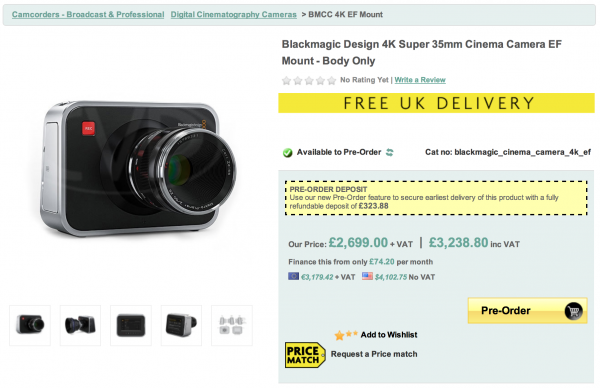 UK dealer CVP has seemingly confirmed a flurry of internet rumours that Blackmagic Design are going to announce a 4K Super35mm RAW camera for an astoundingly low cost of 2699 GBP (plus tax). Posted on their website are details that say it will shoot compressed Cinema DNG, RAW and ProRes. It will have a global shutter to eliminate rolling shutter and a built in SSD recorder. The picture appears to be of the existing BMCC camera, although internet photos seem to show the new 4K camera to be similar.

Interestingly CVP also say it will be available in Micro 4/3 and Canon EF mount – which is extremely odd given that Micro 4/3 lenses don’t cover a Super35 sensor. Maybe not all their details are correct?

They are accepting pre-orders now, although given the pre-order situation for the existing camera this might lead to an interesting conundrum for many users. Pre-order this one or wait until the original unit they ordered comes into stock?

We will be at the Blackmagic Design press conference tomorrow morning to report all the facts. Blackmagic will also be on our live show on the Teradek stand at 12.00pm Pacific time tomorrow answering your questions. You can watch it here.