New Gourna is a village, not far from Luxor, and these days it’s a pretty dilapidated one. Designed and built sixty years ago by Egyptian architect Hassan Fathy – who pioneered the use of sustainable, locally sourced materials and designs to produce affordable housing. Its importance as an architectural and historical site has attracted the attention of the Egyptian government, academics and international organizations such as UNESCO. With a wide-ranging debate developing over its future, we were commissioned to make a short film to give a voice to the people whose opinions have perhaps been heard least: its residents.

Our schedule was tight with only seven days to shoot, edit and deliver the piece. Thankfully the social survey team we were working with had already spent a week on location and had built up a good rapport with the residents and identified potential characters.

The initial plan was to put together a film that demonstrated how the residents themselves are intrinsically linked to Hassan Fathy’s vision of New Gourna. We had two days on location and during our morning recce on day one it became quickly apparent that our preconception of an idyllic community living in adobe architecture wasn’t the full story. Many of the houses were in a bad state and residents expressed a wide variety of opinions on Hassan Fathy, not all of them complimentary. They expressed frustration at issues such as rising groundwater, lack of sanitation and the limitations of expanding the single story adobe architecture in an age of population growth and soaring land prices.

There was also a lot of gossip circulating about what was being planned for the village, with many people using the interviews to express their anger at the authorities over rumours that they might be rehoused in a new location. Knowing that the audience for the film would include government representatives -including the newly appointed Minister of Culture – as well as high level Hassan Fathy theorists, we were well aware that this material needed to be presented very carefully.

We understood that that if the content was too contentious the film would not be screened. During post production some of the more controversial statements and accusations were not used as we felt that this would alienate the intended audience and promote a situation of conflict rather than resolution. Our main aim was to create a film that would open the door for dialogue between the community, the authorities and other decision makers rather than polarize the different groups. During the edit there was a lot of discussion over the trimming of certain quotes, sequencing and the translation of specific words. Ultimately we aimed to strike a balance between fairly representing  the opinions of the residents and delivering a film that would deliver maximum impact on the audience.

The finished film was accepted and screened during the first day of the conference. It sparked strong debate on the inclusion of the village community in the decision-making process, which is what we had hoped.  Sadly  I understand that the village’s potential as a tourist site means that the government had already decided to developed it with hotels and tourist facilities. What will happen to the residents remains to be seen…

We shot with a Canon 5DmkII and a T2i. Lens wise we used a 50mm f1.4 for most of the interviews along with the Canon 17-55 f2.8 and 70-200 f2.8. Sound was recorded on a Zoom H4n with a Sennheiser ME66 shotgun mike. For interior lighting we had two Dedolights and a Litepanel LED. For support we used Manfrotto tripods, the invaluable Manfrotto Magic Arm and Glidecam 2000 stabilizer for walking shots. We also had a Small HD monitor, but set up time meant that we didn’t end up using it, opting instead for the Zacuto Z-finder. 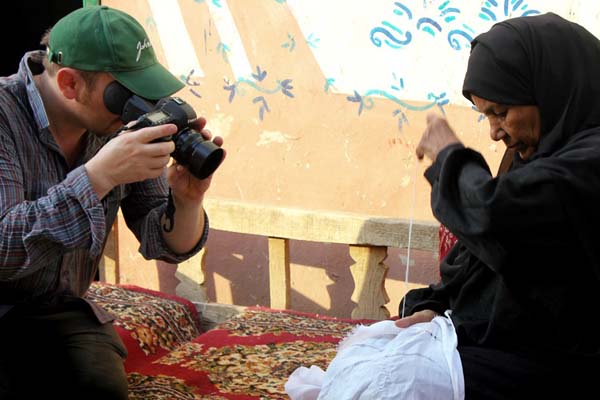 We also took a couple of very useful bits of homemade kit with us. Firstly, a DIY slider made with parts from industrial drawer parts ordered from IGUS; it works reasonably well with a generous amount of WD40 although it’s noisy. It is very lightweight and I managed to cut it down to suitcase length with a hacksaw.

I also brought a roll of Rosco stipple back from the UK after reading about DOP Roger Deakin’s extensive use of it on the Coen brothers films. Mr Mahmud, the tailor, was a total star and managed to turn it into a very useable reflector at very short notice; we rigged it with a collapsable frame made of plastic piping. It worked very well, giving a large, even bounce with a great soft glow thanks to the stipple – so much better than the round pop up chinese reflectors. We used it for all the interviews, bouncing a huge soft fill light quite some distances.

Oliver Wilkins website is at http://www.oliverwilkins.com/
You can see more of Oliver’s work over on Vimeo.