Danfung has been producing incredible work from Afghanistan where he works as an embedded photojournalist. His filming is both editorially and visually compelling – especially given the extreme conditions under which he works. He is currently working on his own documentary, “Battle for Hearts and Minds”, as well as having his footage featured on PBS Frontline. This is his first post about his technique for www.dslrnewsshooter.com

Battle for Hearts and Minds Trailer from Danfung Dennis on Vimeo.

I’ve been inundated with emails asking what camera rig I use, so I will keep this technical to try to answer them. The 5D Mark II is capable of unprecedented image quality, but since it is a stills camera, there are several limitations that I had to address before using this camera in a warzone.

The first problem is with audio. I used a Sennheiser ME- 66 shotgun mic and G2 wireless system running into a Beachtek DXA-2s (I’ve since upgraded to a Juicedlink CX-231 with the Magic Lantern hack) which converts professional XLR mics into a minijack suitable for the 5D. I built custom aluminum ‘wings’ in a workshop to hold this audio setup.

The second problem is stabilization. The design of the 5D Mark makes hand held video shooting difficult. I mounted my whole system onto a Glidecam 2000 HD with custom rubber pads on the mount and a foam ear plug to suppress the vibration of the the lens. The rig is very heavy and it took about two months to get my arm strong enough to shoot extended shots. I cut up a Glidecam Body Pod to make it fit with my body armor and used it to rest my arm when I was not shooting.

To achieve a cinematic look when shooting in bright daylight at f2.8 at 1/60th or slower, requires a drastic amount of reduction of light that hits the sensor. I used a Singh Ray Variable ND filter. While the filter can reduce the amount of light by 2 to 8 stops, I had serious problems with uneven coverage, so part of my frame would be darker than others. I have tried Fader ND filters, but also have the same problem.

Another issue is that all focus must be done manually after recording begins. The only way to address this was a lot of practice racking focus. I was not able to rack focus when running, so I often had to try to stay the same distance from my subject to keep them in focus.

The most frustrating problem was that the camera would overheat after about 15 minutes of continuous shooting in 120 degree heat. I had no option other than to turn it off and let it cool. I did not have a spare body. 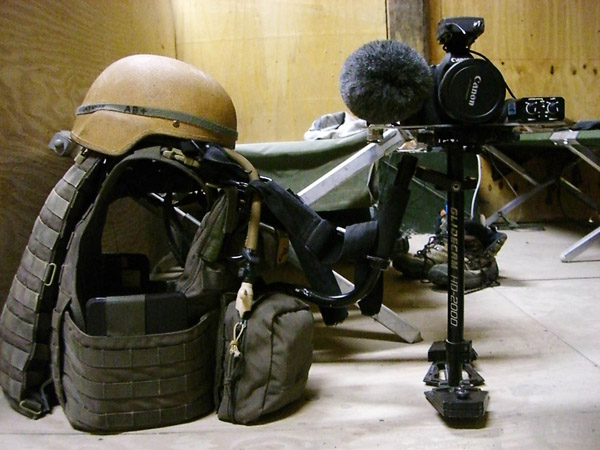 The final serious problem is that the files straight out of the camera are difficult to edit with. I use a 2.93 GHz Macbook Pro 17in, 256gb SSD HD, 4 GB RAM and convert the files into Apple Prores 422 LT using Compressor (the program often crashes when handling many files, but the quality is better than with mpeg streamclip). I use a 8TB Sonnet D400QR5 set at RAID 5 to store the 45 hours of footage and Prores files.

To be notified when the documentary is available online, sign up at
www.battleforheartsandminds.com 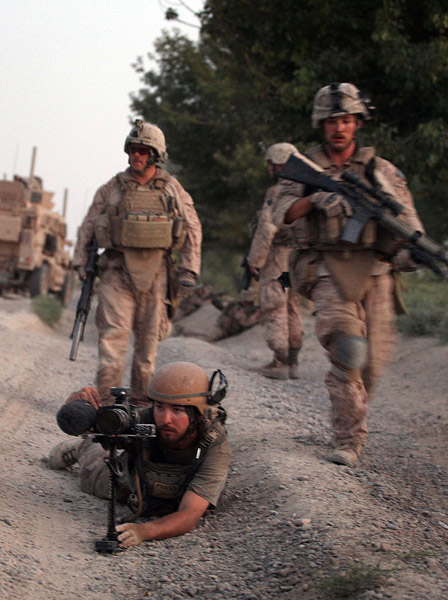 Click here to see Danfung Dennis interview with PBS on covering the war in Afghanistan.