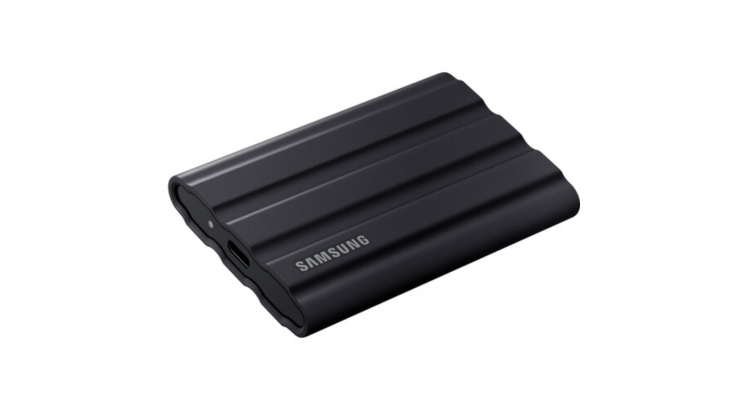 Samsung has announced its new 4TB T7 Shield Portable SSD. While the drive doesn’t offer super fast read/write speeds, it is still going to be fast enough for a lot of applications, such as an external recording device for select cameras.

The Samsung 4TB T7 Shield Portable SSD features a rubber-protected exterior and an IP65 rating providing dust and water resistance. The rugged design and outer elastomer protect it from drops. The rubber exterior with Dynamic Thermal Guard is claimed to control heat to maintain steady performance even for large projects. The T7 Shield weighs 3.5 ounces.

The T7 Shield has claimed read and write speeds of up to 1,050 MB/s and 1,000 MB/s respectively. As I mentioned earlier, while these aren’t blazingly fast speeds, it is approximately twice as fast as its predecessor, the T5. Connectivity is via the USB 3.2 Gen 2 Type-C port.

The T7 Shield supports 256-bit AES hardware encryption to keep the data safe and secure. You also get access to Samsung’s Magician Software, which lets users manage the drive.

The Samsung 4TB T7 Shield Portable SSD is available to pre-order in various colors for $429.99 USD.