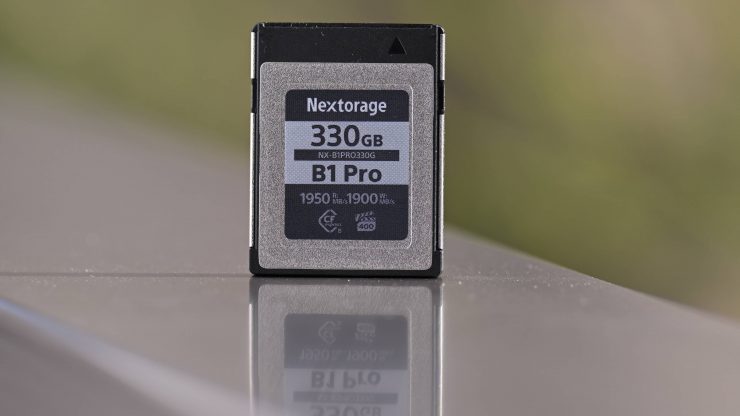 Last month at Interbee 2022 in Japan, Nextorage announced its new B1 Pro Series CFexpress Type B Memory Cards that they claim are the World’s fastest. The cards support the PCIe3.0 NVMe 1.4 interface.

CFexpress Type B cards have been around for a few years now and prices have started to come down, and capacities have gone up. Finding a reliable card with high capacity and good consistent read and write speeds can be a challenge given how many choices there are.

If you haven’t heard of Nextorage before, they were established on October 1, 2019 as a company specializing in the memory storage solutions business. Nextorage is actually led by engineers and staff who build on over 20 years of history in memory storage at Sony. Their company mantra is to create a framework for continuing to provide products of the highest performance with peace of mind, by fully leveraging their memory controller technology, highly durable product design, manufacturing infrastructure, and memory purchasing capacity.

Now, while these speeds may sound impressive on paper, the highest recording bitrate of any camera on the market that utilizes CFexpress Type B cards is around 800MB/s. The read speeds are also going to only be as good as the card reader you are using.

For this review, I am looking at the 333GB capacity B1 Pro Series card.

What cameras are the cards compatible with?

That’s a very good question. Nexstorage doesn’t currently publish any details of what cameras these cards will work with. In theory, given their claimed read/write speeds, they should be capable of working with any camera that uses CFexpress Type B cards.

However, with cameras such as the RED V-RAPTOR and RED V-RAPTOR XL, the cards need to be approved by RED otherwise they won’t work regardless of the speeds.

The Nextorage B1 Pro Series cards, as I have already mentioned, can support all the recording modes of the Nikon Z9, including 8.3K 60p. With the design of PCIe Gen3 interface, the fastest cards can provide extremely high read and write speeds that are over 3 times faster than the best CFast 2.0 and XQD cards.

The B1 Pro Series are VPG400 rated (guaranteed minimum sustained write speed of 400 MB/s) and they are available in capacities ranging from 165 GB to 1.33 TB. The cards were designed specifically for high-speed continuous shooting of RAW images as well as 8K video recording at higher bit rates without dropping frames with the latest high-performance mirrorless cameras.

The B1 Pro Series CFexpress Type memory B cards are equipped with “Dynamic Auto Power Save,” a unique system developed by Nextorage for low-power consumption during video recording. The B1 Pro series is claimed to offer up to 68 % power savings compared to non-equipped pSLC CFexpress cards. This system not only saves the camera’s battery life, but also prevents thermal throttling from triggering by reducing the temperature rise of the card. This interaction contributes to maintaining
sustained write speed during high-speed writing in video recording.

So how do these speeds compare to some other CFexpress Type B cards on the market?

CFexpress cards can be found in capacities up to 4TB. 1TB and 2TB capacity cards tend to be the most popular, but with more cameras coming to market that are recording in higher resolutions and higher bitrates, the need for larger capacity cards will only increase. The Nextorage cards are only available in capacities of 1.33TB which is not as high as a lot of other brands.

So when I mounted the 330GB Nextorage CFexpress card it shows the actual capacity as being 329.87GB. It is good to know that you are getting what is being advertised. However, with some memory cards and media, companies reserve more space for buffer cleaning purposes which offer more stable writing performance.

The speeds offered by the Nextorage cards certainly make them capable of recording 8K RAW from the Nikon Z9 and Canon R5 without breaking a sweat.

On the Nikon Z9, the maximum write speed required when shooting 8K60p in N-RAW is 578MB/s.

Now, if you are using a camera like the RED V-Raptor then you may require a card with a sustained minimum write speed of 800 MB/s. That will limit your card options and it is why camera companies certify particular media and not others. While the Nextorage card is certainly fast enough to be used with the RED V-Raptor and V-Raptor XL, I don’t believe that they have been certified by RED.

In cameras such as the Nikon Z6/ Z6 II and Z7/ Z7 II that only feature a single lane PCIe 2.0 interface, the camera can only read and write to CFexpress cards at throttled-down speeds that are similar to what you would already get with an XQD card. As these cameras don’t even use the full write speed capabilities of XQD cards, CFexpress won’t offer any increased in-camera performance.

What you clearly need to remember, and this goes for any type of media, is that transfer speeds will vary depending on both the read and write speeds of your card, your card reader, your computer, and what type of hard drive you are transferring to.

I did a few tests to see what the sustained read/write speeds of the Nextorage B1 Pro Series CFexpress card were. For the test, I was using a Mac Studio and a USB 3.2 Gen2 (10G) Reader/Writer.

Above you can see the results for the Nextorage 330GB B1 Pro Series card with the stress set to 5GB. I got a sustained write speed of 984.4.MB/s and a sustained read speed of 924.3MB/s. These were very good results, but they were still well below the manufacturer’s bold claims about read/write speeds. However, the limitation of what speed I was able to achieve was limited by my system and card reader.

As a comparison, above you can see the results for the PERGEAR 2TB card with the stress set to 5GB. I got a sustained write speed of 837.5MB/s and a sustained read speed of 855.3MB/s. These were very good results given the relatively low cost of that card.

As another comparison, above you can see the results for the Exascend Archon 1TB card.

As another comparison, you can see the read/write speeds for the Wise Advanced 1TB CFX-B Series card.

Above is a comparison using the PERGEAR 2TB card.

And above is yet another comparison using the Exascend Archon 1TB card.

I also did another test to see how many frames per second the Nextorage card could handle recording 4K DCI ProRes 422HQ. The card could sustain 207fps which again, was the highest I have sen from any CFexpress TYpe B card.

As a comparison, above is the same test using the PERGEAR 2TB card. The card could sustain 154fps, although you can see that there were some inconsistencies in the write performance.

And once more, above is the same test for the Exascend Archon 1TB card.

The results I obtained during all of these tests show that the card is easily capable of recording 8.3K 60p RAW from the Nikon Z9. But just to make sure, let’s do a test.

I tested the card out with the Nikon Z9 and set the camera to record 8.3K 60p RAW and it was able to record without any issues.

Both the B1 Pro and B1 SE series are durability tested in an environment compliant with CompactFlash Association regulations:

Nextorage is currently testing the compatibility of the B1 Pro/B1 SE Series with CFexpress Type B memory card compatible devices and has confirmed recording operation with the Canon EOS R3, EOS R5, EOS R5C and Nikon Z9. Information on other compatible devices will be updated on the Nextorage website as it becomes available.

The Nextorage B1 Pro Series CFexpress Type B memory cards will be available on Amazon from late December 2022. Below is the suggested retail pricing:

The Nextorage B1 Pro Series/B1 SE Series CFexpress Type B memory cards come with bold claims, but in the real world, you are not going to see those advertised speeds. That said, the read and write speeds I obtained were the highest I have seen from any CFexpress Type B card and it was able to sustain a whopping 207fps when shooting 4K DCI in ProRes 422HQ. The cards do offer very stable write and read performance and they can record 8K 8.3K 60p N-RAW and 8K RAW on the Canon R5 without any issues at all. In saying that, most other competing cards are also capable of doing this.

The Nextorage cards are very expensive compared to the competition. For example, a single 1.33TB Nextorage B1 Pro Series card costs $100 USD more than an Exascend 1TB Archon CFast 2.0 Memory Card (2-Pack) If you look at more budget-friendly card options like the PERGEAR CFE-B ULTRA 1TB CFexpress Type-B Memory Card that card is a whopping $1,239.90 USD less than the Nextorage.

It will probably be a hard sell for Nextorage when other much more affordable cards can handle 8K RAW recording without any issues. Unfortunately in the real world, quoting high read and write speeds for cards is largely irrelevant, because the card only needs to have the abilities to be able to handle data rates from the cameras you are using them with. There is no real reason to have a card that has theoretical write speeds that are three times what you actually require.

All in all, the Nextorage card offers very impressive performance and it won’t even break a sweat no matter what you throw at it.