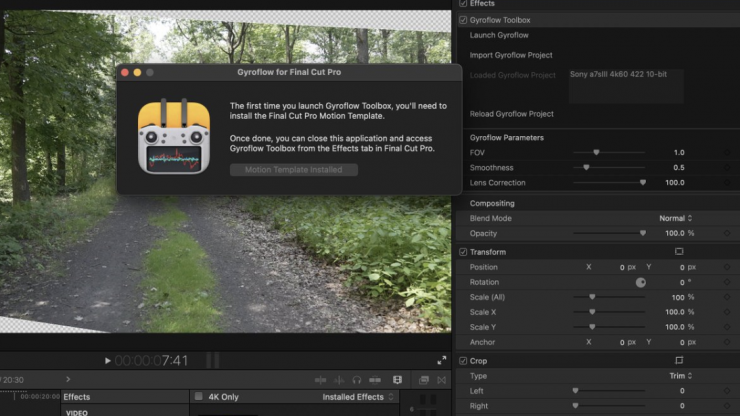 Gyroflow is a free and open source application that can stabilize your video by using motion data from a gyroscope and optionally an accelerometer. Some modern cameras record that data internally (GoPro, Sony, Insta360, etc), and Gyroflow is able to then stabilize the captured footage. It can also use gyro data from an external source (eg. from Betaflight blackbox).

Gyroflow Toolbox allows you to take the stabilized data from Gyroflow and use it within Final Cut Pro as an effect. You will need to install the latest Gyroflow application, before using Gyroflow Toolbox.

Below you can see a list of supported cameras that can be used.

Things you need to be aware of

You can only apply the Gyroflow Toolbox effect to an entire clip. You cannot trim the clip. Due to limitations in Final Cut Pro’s FxPlug4 API the developers currently can’t determine the source start timecode of a clip. Because of this, the Gyroflow Toolbox effect should only be applied to a clip where the start of the clip hasn’t been trimmed in the timeline (i.e. the clip you have in the timeline should show the first frame of the source clip). If you need to trim the start of this clip, you can use the full clip within a Compound Clip, then trim the Compound Clip as required. The team behind Gyroflow Toolbox has been in contact with the Final Cut Pro team about this, and there’s currently no other better workaround or solution.

The Gyroflow team has kindly shared some test footage that contains gyro data on Google Drive.

Download the top ZIP file, then when you extract it, drag the Gyroflow Toolbox.app application to your Applications folder.

You should then run the application. If it’s the first time installing the software, or if there’s been an update, you’ll be prompted to Install Motion Template.

Once you click the button, you’ll be prompted to grant permission to your Movies folder. This is due to macOS’s sandboxing, and you’ll only need to do this once. Click OK.

Once done, you’ll be presented with a successful message:

The button will now be disabled, and will say Motion Template Installed. You can now close the Gyroflow Toolbox application.

How do you use it in FCP?

You can then apply this effect to any clips that are supported by Gyroflow.

From the Inspector you can then click Launch Gyroflow, to open the Gyroflow application.

You can learn more about Gyroflow here.

Once you have finished stabilizing in Gyroflow you should click the Export button arrow and then Export project file (including processed gyro data).

It’s important that you include the processed gyro data, otherwise, none of the stabilization will come across to Gyroflow Toolbox.

You can now press the Import Project button in the Final Cut Pro Inspector to import it.

The data from the Gyroflow Project gets saved within the Final Cut Pro library. If you want to reload it, you can either re-import, or if the file is in the same path, you can press Reload Project.

You can adjust and keyframe the FOV, Smoothness and Lens Correction within Final Cut Pro.