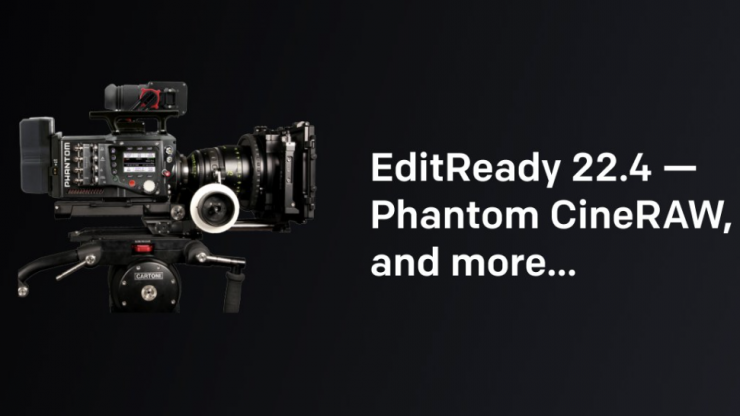 EditReady 22.4 is the fourth major update since the EditReady team joined forces with Hedge. The EditReady team has been focused on expanding RAW support and this continues with their latest release that supports Phantom CineRAW.

EditReady 22.4 adds the often-requested option to map file creation dates to timecode metadata. If you get footage from a DSLR or mirrorless stills cam that doesn’t write timecode, you can now fake a time of day timecode track by using the file’s creation date. This is a pretty cool feature and one that is bound to make a lot of editors’ lives a whole lot easier.

EditReady has also added RED anamorphic support, improved the stability and speed of ARRIRAW playback and transcodes, and added 100p to the retiming tool.

The brand-new EditReady Pro will focus on niche camera support and using EditReady as part of multi-app workflows. EditReady Pro 22.4 which is available from today will support Phantom CineRAW. It also supports playback and transcoding of Phantom files to ProRes or DNxHD with the push of a button. This allows you to make high-speed proxies quickly and easily.

EditReady has a lot more planned for 2023, and they are excited that a Pro tier opens up the possibility of adding some of the recurring feature requests that they have been wanting to build for a long time.

As with Hedge Pro, upgrading an existing EditReady license is easy and affordable.

If you’re using ISG, or need to drive EditReady from the command line, with access to EditReady’s wide RAW camera support and robust clip spanning, metadata retrieval, and more, please get in contact with them.