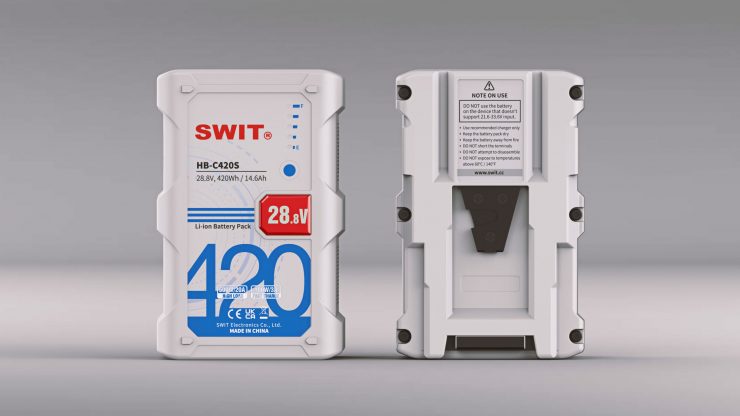 Earlier in the year, SWIT launched the PB-C420S, which is the largest capacity V-mount battery on the market. However, because it runs at 14.4V/250W, this isn’t enough to power some high-power draw lights. This is why SWIT has announced the HB-C420S 28.8V high-voltage 420Wh V-mount battery, which is suitable for running high power draw fixtures.

The HB-C420S has a peak power of 650W. Even with only 1% capacity, it still has a minimum output power of 500W. For some lighting products with V-mount plates, such as Aputure LS 600c Pro, you can run the light at 100% brightness utilizing two HB-C420S batteries.

The HB-C420S features a white housing design. You may be asking why white? Well, SWIT has done this purposely so that you don’t confuse it with the standard 14.4V version because you don’t want to use the battery on any device that doesn’t support a 22-33.6V input.

The inside of the HB-C420S features a modular structure, and the batteries are protected by a bracket. This is done to protect the battery from impact damage. The whole structure, including the electrode, is made of flame-retardant materials to avoid any risk of burning. The modular battery pack is also easy to repair and replace.

When aired with a SWIT four-channel high-speed charger, the HB-C420S supports 33.6V 100W high-voltage high-speed charging. This allows the batteries to be charged to 80% in 3.9 hours and fully charged in 5.3 hours.

SWIT has also launched two new battery adapters, the S-7250 with a single V-mount channel, and the TD-R230S dual-v-mount channel TD-R230S which both support a 48V constant voltage output.

The S-7250S can utilize the full 500W of the HB-C420S, and it provides a Neutrik SpeakOn DC output, which can be directly connected to the light. The S-7250S will also work with any V-mount battery.

In addition to having the same DC port as the S-7250S, the dual-v-mount channel TD-R230S also has a 48V constant voltage conversion module inside. This means you can use two HB-C420S batteries to provide stable 48V 750W through a 3-pin XLR output. This will cover the DC power supply requirements of most lights such as the Aputure LS 600 series, Nanlite 720/720B, Prolycht Orion 675 FS, Creamsourve Vortex8, etc.

The HB-C420S provides a lighter and more flexible power supply solution than using block Batteries. The batteries can be charged and maintained like other V-mount batteries, with a significantly lower cost.

Below are the prices: