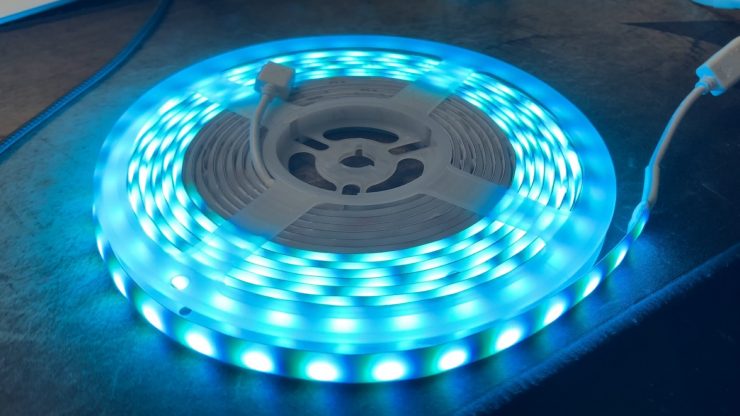 The amaran SM5c is amaran’s first RGB smart pixel LED strip light. It is designed for creators looking to illuminate a space with creative colors from a thin strip light with an adhesive backing for mounting just about anywhere.

The SM5c also features an ultra-high LED density, with 60 RGB LEDs per meter, totaling 300 LEDs over the 5-meter length, and is among the few strip lights on the market with the highest LED density. Additionally, among higher-end LED strip lights that also utilize RGB pixels, the SM5c is more affordable for its length at only $89.

The SM5c incorporates a unique blend of features that are not found in existing LED light strips, including a combination of voice-controlled capabilities, a long 5-meter length, RGB LEDs, and 100 pixels to create pixelated effects.

The amaran SM5c strip light has an adhesive backing that can be mounted to pretty much anything, but it’s not easily removed to use elsewhere.

The SM5c’s advanced circuity allows it to simultaneously display more than one color and has pixel control capabilities. It is mainly designed to be an effects light to create saturated colors, pixels, and effects. It is not designed to be used as a key light, fill light, on skin tones, or to create a white light effect.

The strip light is the third light in the Aputure family that features Pixel Control. The SM5c is also the first light to be compatible with Pixel Control in Sidus Link with the new Sidus Link Version 1.9 firmware update. The light features 100 pixels that can be independently controlled over 5 or 25 light zones, and is equipped with 21 built-in pixel effects, allowing users to create smooth pixel chases and effects.

The strip light includes a frosted diffusion layer that covers the entire strip light. This creates a soft glow and reduces glare, making it more suitable for direct viewing and on-camera. Truly designed as an on-set practicle.

The SM5c is the first Aputure light to include a built-in microphone in the external controller for Music Effects capabilities which allows creators to create a real-time audio visualizer by syncing lighting effects to audio.

The SM5c can be controlled wirelessly via the Sidus Link mobile app with Sidus Mesh technology. You can finely tune almost every single aspect of the SM5c from a smartphone or tablet.

Strip lights are a consumer product you can buy at a big box store however they are not designed for filmmaking and video production so flicker can be an issue. Purpose-built strip lights for on-set use are a great idea, and I can see them being very popular.

The amaran SM5c retails for $89 and will be available for shipping worldwide beginning November 17th, 2022.