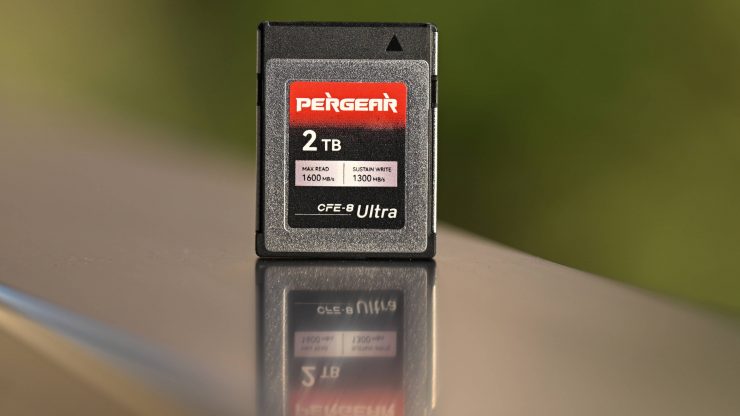 CFexpress cards have been around for a few years now and prices have started to come down, and capacities have gone up. Finding a reliable card with high capacity and good consistent read and write speeds can be a challenge given how many choices there is.

PERGEAR entered the CFexpress Type-B memory card market 2 years ago and now after continuous product testing and gathering user feedback, they came up with a new series of upgraded cards with better performance and faster read and write speeds.

There are three different versions of the CFexpress Type B cards:

For this review, I am looking at the 2TB Ultra card.

The Ultra cards are available in capacities of 1TB/2TB and they have claimed read speeds of 1600MB/s, and write speeds of 1300MB/s. These cards were designed specifically to have high capacities and to be used with high-resolution and bit-rate cameras.

The read/write speed has been greatly improved in stable write performance over early versions. 1300MB/s is 3.5 times faster than the older PERGEAR generation 1 card (400MB/s).

These new Ultra cards will support all recording modes of the Nikon Z9, including 8.3K 60p. The cards also come with a 5-year warranty.

What cameras are the cards compatible with?

The PERGEAR CFE-B ULTRA 2TB CFexpress Type-B Memory Card as I have already mentioned, can support all the recording modes of the Nikon Z9, including 8.3K 60p. With the design of PCIe Gen3 interface, the fastest cards can provide extremely high read and write speeds that are over 3 times faster than the best CFast 2.0 and XQD cards.

The PERGEAR card has a claimed read speed of 1600MB/s and a sustained write speed of 1300MB/s.

So how do these speeds compare to some other 2TB cards on the market?

CFexpress cards can be found in capacities up to 4TB. !TB and 2TB capacity cards tend to be the most popular, but with more cameras coming to market that are recording in higher resolutions and higher bitrates, the need for larger capacity cards will only increase.

So when I mounted the PERGEAR 2TB CFexpress card it shows the actual capacity as being 2.05TB. It is good to know that you are getting what is being advertised. However, with some memory cards and media, companies reserve more space for buffer cleaning purposes which offer more stable writing performance.

The speeds offered by the PERGEAR CFE-B ULTRA 2TB Memory card certainly make it capable of recording 8K RAW from the Nikon Z9 and Canon R5 without breaking a sweat.

On the Nikon Z9 the maximum write speed required when shooting 8K60p in N-RAW is 578MB/s.

Now, if you are using a camera like the RED V-Raptor then you may require a card with a sustained minimum write speed of 800 MB/s. That will limit your card options and it is why camera companies certify particular media and not others.

In cameras such as the Nikon Z6/ Z6 II and Z7/ Z7 II that only feature a single lane PCIe 2.0 interface, the camera can only read and write to CFexpress cards at throttled-down speeds that are similar to what you would already get with an XQD card. As these cameras don’t even use the full write speed capabilities of XQD cards, CFexpress won’t offer any increased in-camera performance.

Not Backwards Compatible with XQD

What you clearly need to remember, and this goes for any type of media, is that transfer speeds will vary depending on both the read and write speeds of your card, your card reader, your computer, and what type of hard drive you are transferring to.

I did a few tests to see what the sustained read/write speeds of the PERGEAR CFexpress card were. For the test, I was using a Mac Studio and a PERGEAR CF-B Card Reader.

Above you can see the results for the PERGEAR 2TB card with the stress set to 5GB. I got a sustained write speed of 837.5MB/s and a sustained read speed of 855.3MB/s. These were very good results given the relatively low cost of the card.

As a comparison, above you can see the results for the older and slower 1TB CFexpress Type B Pro Memory Card with the stress set to 5GB.

As another comparison, above you can see the results for the Exascend Archon 1TB card.

As another comparison, you can see the read/write speeds using Blackmagic Disk Speed Test for the Wise Advanced 1TB CFX-B Series card.

I also tested the PERGEAR 2TB card using the AJA System Test Lite software under a 4GB load to see what the read and write speeds were. The card performed well in this test.

As a comparison, above you can see the same test for the Wise Advanced 1TB CFX-B Series card.

As another comparison, above is the same test for the Exascend Archon 1TB card.

I also did another test to see how many frames per second the PERGEAR 2TB card could handle recording 4K DCI ProRes 422HQ. The card could sustain 154fps.

As a comparison, above you can see the difference when using the Wise Advanced 1TB CFX-B Series card.

As another comparison, above is the same test for the Exascend Archon 1TB card.

The results I obtained during all of these tests clearly show that the card is easily capable of recording 8k 60p RAW from the Nikon Z9 and 8K RAW from the Canon R5.

I tested the card out with the Nikon Z9 and set the camera to record 8.3K 60p RAW and it was able to record without any issues.

If you want to record 5.4K ProRes RAW you can get 1 hour and 25 minutes of record time.

The PERGEAR CFE-B ULTRA 2TB Memory card retails for $599 USD and you can also buy it with a CFexpress Type B card reader for $619 USD.

The card reader is really well built and the card will not accidentally come out because you need to push it in until a spring mechanism releases it. Considering you can get the card reader for just $20 USD when you buy the card, it is well worth it.

As you can see, the PERGEAR 2TB card is the cheapest 2TB option available. Now, you may be thinking that maybe the card won’t be as reliable as other options because it is a lot cheaper, however, PERGEAR offers a 5-year warranty where they will replace your card if it fails.

The card has a listed working temperature of:

If you own cameras such as the Canon C500 Mark II, C300 Mark III, Canon R5, Canon R3, or the Nikon Z9, the PERGEAR 2TB CFexpress card is certainly a very affordable and capable option.

The card worked flawlessly with the Nikon Z9 and it can record 8K RAW and 4K ProRes 422HQ without any issues at all. This makes it by far the most affordable 2TB CFexpress Type B card to be able to do so.

If you are using CFexpress Type B cards with some of the latest cameras that can record 8K RAW then you can end up spending a lot of money on media, and that is what makes a budget-friendly card like the PERGEAR very appealing.