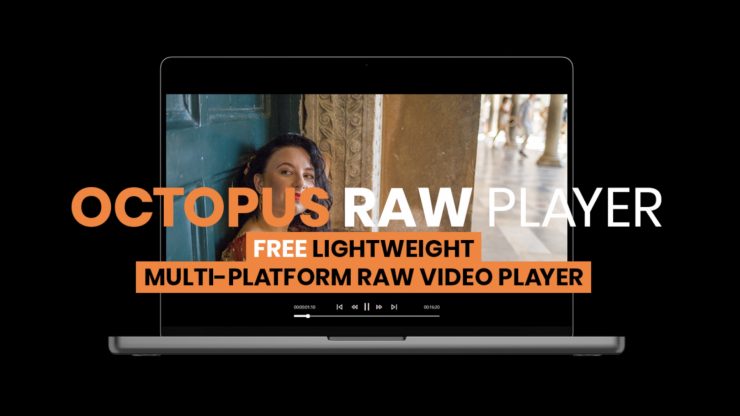 While this is a little limiting, this is a free piece of softawre and if you own some of the older cameras like a Blackmagic Cinema Camera 2.5K or a Sigms fp then it is worth downloading.

Currently, the OCTOPUS RAW Player supports playback of CinemaDNG (.dng) sequences. To open a sequence, either drag the folder containing .dng files or a single .dng frame file into the player window. Alternatively, .dng sequences can be opened explicitly under the “File…Open CinemaDNG Sequence…” menu and selecting the containing folder of .dng files.

When a sequence is loaded, the floating playback interface provides controls for standard play/pause/seek and additionally fast and fast-rewind playback speeds. The interface includes the current frame timecode and the clip duration. The timecode also indicates missing or skipped frames by using a red or orange typeface respectively.

When working with CinemaDNG or any raw format, the image needs developing to look normal. Tools for working with RAW can expose control over the developing process. These controls typically include white balance/tint and exposure but can also feature more advanced and creative options. OCTOPUS RAW Player exposes several advanced controls while remaining straight forward to use. All RAW controls are located under the “Clip…” menu which is enabled when a sequence is loaded.

OCTOPUS has tested RAW Player with the following cameras:

Below you can see the future roadmap for RAW Player.

INSTALLER
Use the following installer for your platform to install the OCTOPUS RAW Player:

STANDALONE
Alternatively, the OCTOPUS RAW Player can be used as a portable single file executable without requiring installation:

LICENSE
OCTOPUS RAW Player is completely free to use as per the MIT license.