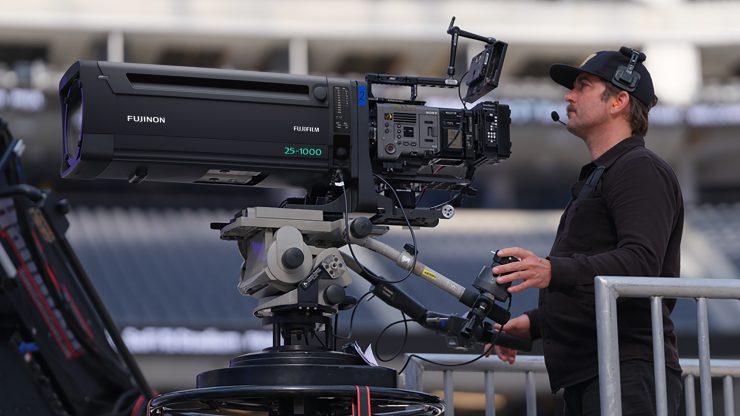 Fujifilm has announced the FUJINON HZK25-1000mm F2.8-5.0 PL Mount Box Lens. This lens which will be available in 2023 was designed to offer users the highest combination of magnification and telephoto reach for large cinema sensors.

The new HZK25-1000 box lens features a native PL mount, a zoom ratio of 40x, and a telephoto focal length of 1000mm, which makes it the highest combination of magnification and telephoto reach available to date for any lens that can be used on S35 and large format sensors.

The HZK25-1000 is a real feat of engineering. Not only does it feature a very large focal range, but the maximum aperture even when using the lens at 1000mm is just F5. As a comparison, the Canon CINE-SERVO 50-1000mm at 1000mm is T8.9. Yes, the Canon is a way smaller and lighter lens, but it is virtually unusable in low-light environments such as concerts, etc. when at the telephoto end.

The lens came about after FUJIFILM observed and gathered feedback from professionals working with digital cinema cameras in live production environments. FUJIFILM saw that there was a clear need for a PL mount lens that could cover a variety of larger sensors and offer a very large focal reach. The HZK25-1000 features the same designation as found in FUJINON’s Premier Series.

Digital cinema cameras with image sensors larger than existing B4-mount cameras have been increasingly popular for sports and live event broadcasting. The use of large-sensor cameras enables the expression of immersive images by offering smooth bokeh and high dynamic range for live broadcasting. While traditional lenses for single sensor cameras may be optimal for filming movies and commercials, the zoom ratio is considerably lower than that of a B4 mount lens, and lens characteristics when zooming and focusing are different from those applicable to lenses used in live broadcasting.

HZK25-1000 deploys a dual-format system which means that it can support two single sensor sizes. This allows the lens to be used on both large format and super 35mm sensors. The HZK25-1000 enables shooting with the same field of view in both large format and super 35mm formats. Just to be crystal clear, you need to use the 1.5x extender for the lens to cover full frame sensors.

A 1.5x expander gives operators the ability to capture images at 1500mm. Additionally, when paired with a large format sensor, operators can shoot with a field of view equivalent to that of a super 35mm sensor while maintaining maximum optical performance.

The lens is the first commercially available box-type zoom lens compatible with large sensors equipped with optical image stabilization. The latest anti-vibration mechanism and firmware utilize Fujifilm’s unique ceramic ball roller system. Not only does this mechanism provide a high level of anti-vibration performance against shaking caused by footholds and wind, but it also suppresses shaking of the hands to ensure stable image capture.

Fujifilm’s proprietary optical technology is claimed to help suppress aberrations by using a large-aperture aspherical lens and a fluorite lens that has been polished. FUJIFILM states that by eliminating unnecessary ghosting, flare, and color fringe, the lens delivers high optical performance.

The out-of-focus bokeh is controlled through repeated simulations using Fujifilm’s proprietary optical design application, “FOCUS” (Fujifilm Optical Class Library and Utilities System), which determines optimal glass materials from the infinite combination of possibilities. The texture of each layer in the out-of-focus area is verified to achieve a bokeh that softens and naturally melts the background. Furthermore, camera operators can operate the lens in a setup specialized for live broadcasting, since existing FUJINON box lens accessories can be used in support of multi-camera operation. Wireless controllers from Preston Cinema and ARRI are compatible with HZK25-1000 and can also be connected.

In addition to stabilization, HZK25-1000 features all of the latest technological advancements that are now standard in most of Fujifilm’s FUJINON broadcast lenses:

The FUJINON HZK25-1,000mm F2.8-F5.0 is expected to be available in Spring 2023, however, there is currently no indication about pricing. For a lens such as this, if you need to ask, you can’t afford it! This lens is squarely aimed at broadcasters, large production studios, and outside broadcast providers. For more information, visit www.fujinon.com.