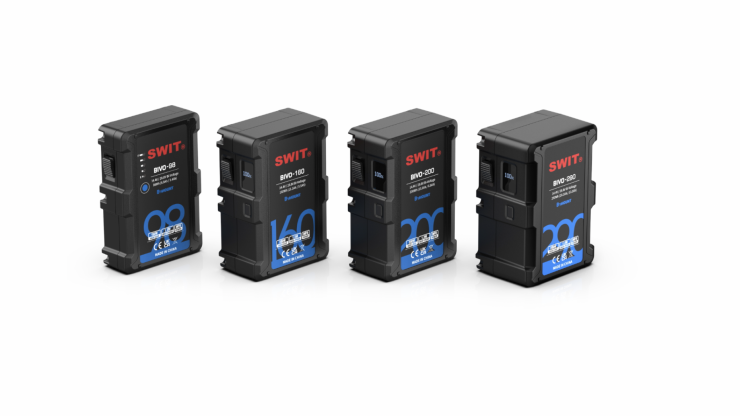 SWIT has announced new BIVO series Bi-Voltage B-Mount Batteries. With the release of the ALEXA 35, the demand for B-Mount batteries has certainly increased. Many manufacturers have now introduced their own B-Mount power solutions, along with SWIT.

The new BIVO series adopts the 14.4V/28.8V standard, and in addition to 290Wh, three new capacity options have been added: 98Wh, 160Wh, and 200Wh. Having 98Wh and 160Wh versions is a big deal because it allows users to actually hand carry them on a plane.

The BIVO series utilize the exact same design as the HB-A290B, with the exception of the smaller BIVO-98 which doesn’t feature an OLED screen display due to its thickness. The 200Wh and 160Wh two versions have the same thickness, and BIVO-290 has the same volume as the previous HB-A290B.

The digital ID interface of the B-Mount can intelligently identify the voltage (14.4V/28.8V), which means that the dual voltage functionality of the BIVO series is a good choice for any B-Mount application. With the exception of the BIVO-98 (150W), the other three batteries have an output power of at least 200W.

With SWIT’s unique Mispress prevention design, pressing the release button by mistake will not cause an accidental shut down of the camera, especially if a user is used to operating the camera by holding and moving the mounted battery.

In addition to the new batteries, SWIT has also launched a variety of B-B, V-B, B-V Hot Swap and Conversion plates.

The KA-S20B conversion plates provide direct B-mount (batteries) to V-mount (devices) conversion of 14.4V standard voltage. This means that BIVO series batteries can be used directly on different devices so that charging and maintenance problems of multi-interface batteries are avoided.

The KA-S21B conversion plates provide direct B-mount (batteries) to V-mount (devices) conversion of 28.8V standard voltage. This means that BIVO series batteries can be used directly on different devices so that charging and maintenance problems of multi-interface batteries are avoided.

The KA-B21S conversion plate supports the use of high-voltage V-mount batteries on native B-Mount devices. This gives you a drop-proof high-voltage battery solution for the ARRI ALEXA 35.

Below are the prices for the batteries and hot swap and conversion plates:

Below are the prices for European regions:

All of SWIT’s new products will be on display at IBC 2022 in Amsterdam.