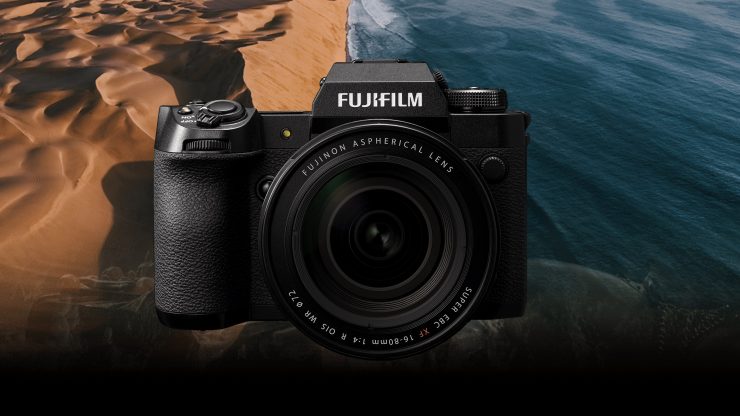 FUJIFILM has announced its new X-H2, an 8K capable APS-C mirrorless hybrid with some impressive video and photography specifications and features.

The X-H2S utilizes the world’s first 40MP APS-C sensor, which allows it to record 8K video, and it has a sensor shift mode for capturing 160MP images. The Pixel Shift Multi-Shot system records 20 separate images, spaced 0.5 pixels apart, and then combines them into a single 160MP DNG raw image.

Utilizing the in-body image stabilization function, the sensor is shifted with high precision and automatic shooting is performed to acquire 20 images with a single shutter release. By processing the acquired images using the dedicated software “Pixel Shift Combiner”, it is possible to generate ultra-high resolution images of approximately 160 million pixels.

It is possible to suppress false colors by moving the image sensor with high precision so that all pixels are aligned with red, green, and blue color information. By obtaining accurate color information for all 160 million pixels, you can record the subject in real color.

Below are the following lenses that are capable of being used to capture 40.2-megapixel high-resolution images:

Just like the X-H2S, the X-H2 comes with a new X-Trans CMOS 5 HR sensor, however, the resolution has jumped from 26MP to 40MP.

At 40MP, the X-H2 becomes the highest-resolution APS-C digital camera on the market. FUJFIILM’s X-H2 back side illuminated X-Trans CMOS 5 HR sensor is paired with the new X-Processor 5 for optimal performance and image fidelity. The new sensor/processor combination provides enhanced autofocus capabilities and blackout-free image bursts at 15 fps, all while being 10% more efficient on the batteries than its predecessor. ISO ranges from ISO 125 to ISO 12800, with expanded options in each direction.

FUJIFILM cameras have always tended to have impressive video specifications, and the X-H2 is no exception. It is able to record 8K/30P video for up to 240 minutes (with the optional fan) in ProRes 422/ 422HQ / LT 10-bit to CFexpress Type B cards. When shooting Apple ProRes, proxy shooting such as Apple ProRes 422 Proxy is also supported

It also has the ability to output a 12-bit RAW signal over HDMI that can be captured as ProRes RAW to a compatible Atomos device. You can also record Blackmagic RAW as well to a Blackmagic Design Video Assist 12G.

The camera can oversample the 8K image to record a high-quality 4K image.

When recording with the F-Log2 color profile, the X-H2’s dynamic range is claimed to be 13+ stops, which is a 1-stop improvement over the previous sensor, but one stop less than the X-H2.

The XH-2 can record continuously for up to 160 minutes at 77°F, and this time can be extended to 240 minutes with the optional X-H2 clip-on FAN-001 Cooling Fan. A vertical grip can give more battery power and expanded capabilities. Video shooters can also mount a host of accessories to the camera by using the SmallRig Camera Cages for the base camera and one with a battery grip.

Above you can see all of the recording resolutions, frame rates, and codecs that are available when using the camera.

The built-in X-Trans CMOS 5 HR enables a digital zoom function during video recording. Even when a fixed focal length lens is attached, a maximum of 2x zoom expression is possible without compromising resolution. Also, when the power zoom lens XF18-120mmF4 LM PZ WR is attached.

There is also a new MF Assist “Focus Meter” that enables more precise focus adjustment. It can also be used in combination with focus peaking.

The camera body supports wireless image transfer through the FUJIFILM Remote Camera App and it can supply webcam resolutions of up to 4K/60P for livestreaming. The optional VFT-XH Wireless File Transmitter Battery Grip adds tethering connections and FTP file transfer through Wi-Fi, ethernet, and smart device connections. A remote record function enables up to four grip-equipped cameras to be controlled via a web browser on a laptop, tablet, or smartphone.

There is also a new subject detection AF function developed using deep learning technology. In addition to human faces and eyes, AI can detect animals, birds, cars, motorcycles and bicycles, airplanes, and trains. Since the camera automatically tracks the target subject while it is in focus.

The new XF 56mm was designed for high-resolution sensors such as the X-H2.

The WR designation on the 56mm lens indicates that this lens has been sealed against weather and dust. A fluorine-coated front element repels water and fingerprints.

The optical design consists of 13 elements in 8 groups and it incorporates two aspherical elements and a single ED element which are claimed to minimize chromatic aberrations and coma. There is also an 11-blade aperture diaphragm. The eight elements in the focus group feature high-refractive technology previously found in legendary FUJINON cinema lenses. The minimum focus distance is 19.7″.

The FUJIFILM X-H2 Mirrorless Camera retails for $1,999 USD, which is a good price given its feature set. It is expected to start shipping on the 29th of September.