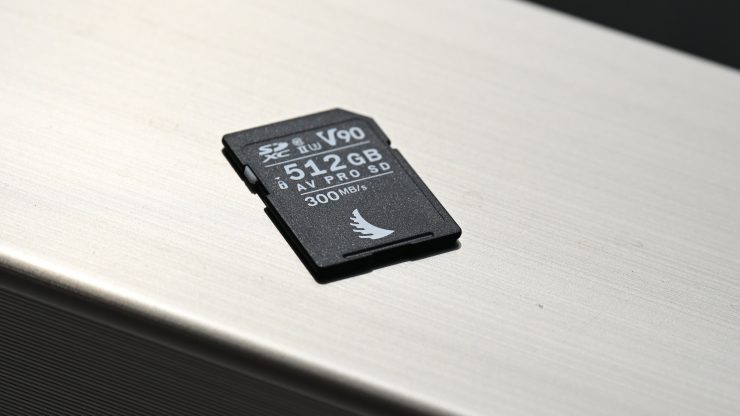 Back in July, Angelbird announced that it’s SDXC UHS-II V90 rated cards would be available in larger capacities. The AV PRO SD MK2 V90 is now available in 512GB.

Media cards are not very exciting, but they are a crucial part of any production and that is why I have and will continue to review them on the site.

Not only do the newly released larger capacity AV PRO SD MK2 cards have a minimum V90 speed rating, but they also feature Angelbird’s Stable Stream technology that is said to optimize recording performance throughout the entire capacity of the card (and for the duration of the recording session). Angelbird claims that the minimum sustained write speed of the V90 cards, it is 260 MB/s.

The cards also feature an integrated write-protect switch that prevents accidental file deletion and card formatting, as well as adaptive power management. Adaptive power management essentially is a way in which low power draw and bus-powered components have been designed to place a minimal drain on battery life. The cards are also protected against moisture, x-ray/magnets, shock, and dust.

Angelbird also offers a 3-year limited warranty and free data recovery service. However, to receive the full limited warranty, this product must be registered on the Angelbird Personal Service Portal within 30 days after purchase using the included activation code. If not registered within this period, the market-specific legal guarantee period comes into force.

Even with a lot of cameras transitioning to CFexpress Type B cards, there is still clearly a demand for V90 SDXC UHS-II memory cards. SD cards are still likely to dominate the market over the next few years and it is interesting to see that companies like Apple still put a built-in SD UHS-II slot in the latest MacBook Pro and MacStudio models.

Angelbird has a nice section on its webpage where you can see which of its cards are compatible with various different cameras.

SD cards, even V90 rates ones are hardly the fastest form of media. As I previously mentioned, the Angelbird AV PRO SD MK2 V90 Media Cards can provide speeds of up to 280MB/s write and up to 300MB/s read with consistent performance over the card’s entire capacity. To meet the V90 standard a card must have the ability to support a minimum sustained write speed of 90 MB/s. 90MB/s is going to cover most cameras that utilize SD cards as their recording media.

So how do these speeds compare to other V90 cards on the market? Above you can see. There isn’t a big difference in claimed read and write speeds for any of the available V90 cards.

With cameras like the Canon C70 now having the ability to record internal RAW, there is certainly the need for larger capacity V90 cards.

When I mounted the 512GB card on my computer it shows the actual capacity as being 512.91GB. Given the RED Mini Mag controversy, it is good to know that you are getting what is being advertised. However, with some memory cards and media, companies reserve more space for buffer cleaning purposes which is claimed to offer more stable writing performance.

Now, macOS reports storage capacity differently from Windows. Apple uses base 10, while Windows uses base 2. Yes, this may well be a bit of semantics, but I am only using macOS, so that is the only way I am able to test the capacity.

I did a few tests to see what the sustained read/write speeds of the Angelbird card were.

For the sustained read/write speeds I was using the Angelbird SD UHS-II Dual Card Reader. The computer being used was an iMac Pro.

Above you can see the results for the card with the stress set to 5GB. This was an impressive result for a V90 card. It was able to sustain write speeds of 239.4 MB/s and a read speed of 268.1 MB/s

As a comparison, above you can see the results for the OWC Atlas S Pro UHS-II SDXC Memory card with the stress set to 5GB. As you can see the sustained write speed was 220.3 MB/s.

I also tested the Angelbird card using the AJA System Test Lite software under a 4GB load to see what the read and write speeds were. The card gave me an average write speed of 214MB/s and an average write speed of 261MB/s. As you can see the average sustained write speed was significantly higher than the 90MB/s minimum that is required for V90 cards. Even the minimum write speed recorded during this test was 127MB/s. I have also included the results for the same test done with the Wise Advanced SDXC UHS-II Memory Card (512GB) and the OWC Atlas S Pro 128GB UHS-II SDXC Memory card.

Above you can see how many frames per second the Angelbird was capable of if you were recording 4K DCI in ProRes 422HQ.

As a comparison, above you can see how many frames per second the OWC Atlas S Pro 128GB UHS-II SDXC Memory card could support if you were recording 4K DCI in ProRes 422HQ.

As another comparison, above are the same tests when using a V90 rated ProGrade Digital 256GB UHS-II SDXC card and a Panasonic 128GB UHS-II SDXC card. As you can see the ProGrade wasn’t nearly as fast and it struggled when it came to how many fps it could write at a sustained level. The Panasonic performed better than the ProGrade, but if you look at the graph it did have moments where it dropped frames and write speeds. This just goes to show you that you can’t rely on the read speeds that are provided by certain companies. Not all cards are created equally, despite what specifications are written on the marketing material.

The Angelbird 512GB AV Pro Mk 2 UHS-II SDXC Memory Card had the best results of any V90 rated card I have tested so far. In saying that, all of the V90 cards I have tested are capable of getting the job done.

I think with media cards it is always best to use a recommended card that has been tested by the camera manafacturer. You should also do some internet searches to see if anyone has had any issues, and if they did, what the customer service is like.

Below you can see the prices for all of the available capacities:

Let’s have a look at how much other 512GB V90 options are when compared to the Angelbird.

The Angelbird is more expensive than the OWC and the ProGrade options but it is $100 USD cheaper than the Wise.

If you own a camera that requires the use of V90 rated cards you want to make sure you get a good one. With cameras like the Canon C70 being able to record internally having a reliable card with good sustained write speeds is important.

The Angelbird 512GB AV Pro Mk 2 UHS-II SDXC Memory Car is a solid option with impressive sustained read and write speeds. It had the highest sustained read and write speeds of any V90 card I have tested so far. The card worked as advertised and I didn’t encounter any issues when using them. Everything you capture ends up on a card or drive, and while no media is 100% guaranteed to work without ever encountering any issues it always pays to use good quality media that performs well.