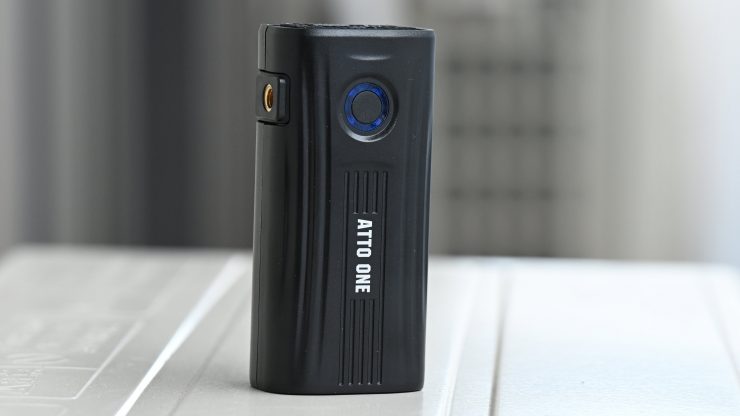 FXLION recently announced the ATTO ONE battery. The ATTO ONE is the smallest battery in FXLION’s product range and it was designed to be used with camera rigs, gimbals, LED lights, or even your smartphone and laptop.

Essentially it is a 37Wh multi-purpose battery that features a D-tap port, φ2.1 DC out, USB-C out, and a USB-A out.

Products like this are nice solutions for keeping in a kit bag because they can be used to power a wide array of devices. In an emergency or in the event of some other powering device failing you can use the ATTO ONE to keep you up and running.

This small size and weight make it a good option for just keeping in a bag.

As far as the build quality is concerned, it feels solidly made.

The covers that are used to protect the output ports fit well and they are easy to remove.

There are no physical on or off switches or dials or displays that could get broken. The whole concept behind the product was to make something that could stand up to the rigors of field use.

The ATTO ONE gives you a range of power outputs such as D-Tap, USB-C, USB-A, and a 7.4V DC socket. The capacity of the battery is 37Wh and can be loaded with a maximum of 74W. All outputs can be used at the same time.

As far as what is available over what outputs, I have constructed a table for you that you can see above.

The biggest advantage the ATTO ONE has over some of the other similar devices is the USB-C output. Most other devices that are being sold as similar solutions feature USB-A and not USB-C.

The ATTO ONE can be charged by a wide array of phone or laptop power adaptors. You can also charge it using any charger that supports PD 3.0 fast charge protocols.

It has a simple power indicator that you press that will show you a rough estimation of how much charge the battery has left. While this works ok, I would have preferred to have seen a small display will a more accurate representation of battery life.

The battery features two 1/4-20″ threads so that you can mount the battery to a wide variety of devices.

While this is ok, I often find that mounting external batteries such as this to equipment is never straightforward and if you are coupling it to a small camera then you can quickly end up with an unergonomic frankernrig.

I personally wouldn’t want to attach the ATTO ONE to a small-sized camera because of this very reason. In saying that, you can still use it that way and just because I wouldn’t do it, doesn’t mean that it wouldn’t work for someone else.

You can’t mount the battery between your camera and a baseplate because the ATTO ONE doesn’t have 1/4-20″ threads on opposite sides.

I would have liked to have seen some sort of belt clip or similar so you could attach it to yourself and then attach a cable to your camera.

I actually found myself using it more often than not as a backup battery for my phone or laptop. But then I kept saying to myself, hold on, I could be charging these devices with batteries I already own.

It is nice that you can use it to charge multiple devices at once, such as a mirrorless hybrid and a wireless TX unit for example. Although, as I mentioned earlier, you can end up with a Frankenrig and a spaghetti mess of cables.

I did find it useful for charging or powering small LED lights or LED tube lights out in the field.

It is also useful for charging up batteries inside mirrorless hybrids between shooing locations, especially if you don’t own a lot of batteries for your camera.

The ATTO ONE is a decent enough little device and it can certainly come in handy. My only niggling complaint is that I think because it is only a 37Wh battery its usefulness is somewhat restricted. Having a low capacity means that it is only going to be useful for powering certain devices.

This does make it a little niche and for me it sort of falls in between having a regular USB power bank and a camera battery that has D-tap and USB-C.

It is also quite large for a battery that only has a capacity of 37Wh.

The advantage it has over something like an Anton Bauer Titon Base Kit for NP-FW50-Compatible Camera or Core SWX Powerbase EDGE LITE Battery with D-Tap Charger Bundle is that it is smaller, it has USB-C, and it is less expensive.

Despite some of the issues I have brought up, I still like the ATTO ONE, and as I previously mentioned, it is a nice device to just keep in your kit bag. The flexibility it offers by providing so many different outputs means you can power or charge devices in the field and it is great to have as a back up for when situation arise.