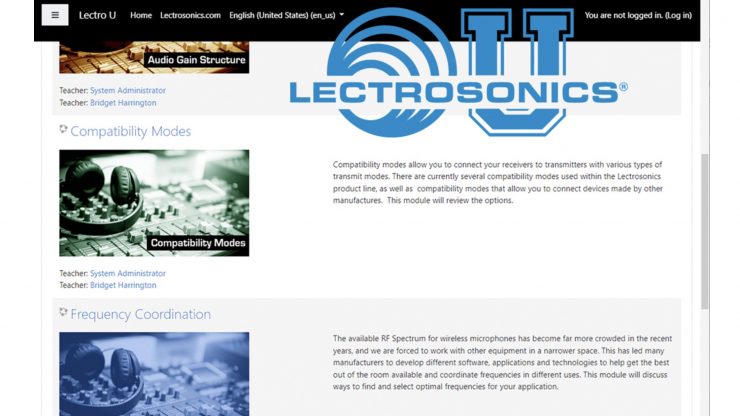 Lectrosonics has released a series of online training courses called LectroU. These are free courses intended for anyone wanting to further their knowledge and expertise in wireless mic system technology and the best practices for using them.

The course series contains five overall subject areas, with several subsections within each. Each of the modules includes videos containing the training materials and detailed explanations, followed by subject area quizzes. Participants completing all modules will receive a certificate of completion from Lectrosonics. Registration for the series of LectroU training courses is free.

Due to the importance of proper lavaliere microphone wiring for best wireless system performance, the first module covers this subject. The Lectrosonics TA5 wiring scheme is explained in detail, along with different types of microphones and other connection types as well such as line inputs.

Audio Gain Structure is one of the central concepts for all audio systems and thus is covered in the second area.

The third subject area in LectroU covers the intricacies of the different compatibility modes offered in the Lectrosonics products.

And as Wireless Designer has become a powerful tool for all Lectrosonics wireless system users and even users of older or non-Lectrosonics systems, the next module area covers the use and best practices with this software package.