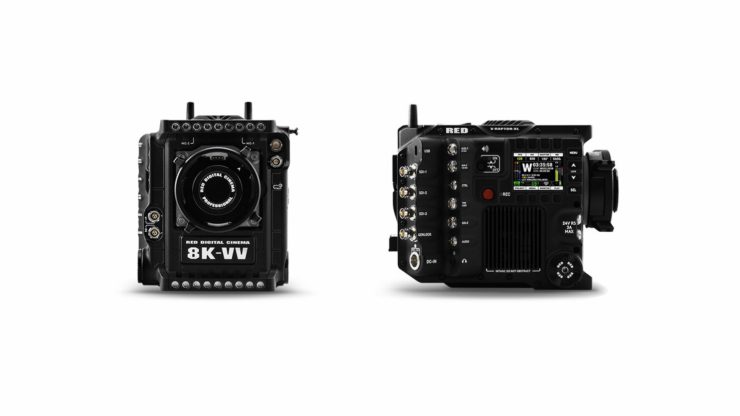 The base of the V-RAPTOR XL 8K VV is still centered around the V-RAPTOR brain, but it adds auxiliary power and mounting options, as well as features such as internal ND filters, a dedicated lens mount system, wireless genlock and timecode, and more video outputs.

You can see what resolutions and framerates the camera can record above. AS far as recording media is concerned, it utilizes a single slot CFexpress Type B card.

Ok, so let’s look in a little more detail about what you get as standard with the V-RAPTOR XL VV Production Pack.

There is an interchangeable PL mount with an optional EF mount and perhaps the biggest news is that the camera features internal electronic ND filters that range from 2 to 7 stops. This isn’t a variable eND system, but there are selectable 1/3-, 1/2-, or 1-stop intervals you can choose from. Each brain comes default with a PL lens mount, and it includes a PL mount shim pack, an AC power adapter, and an XLR power cable.

The camera comes with either an Anton Bauer Gold or V-mount battery plate, and its power output options include the following:

If you just buy the base camera without all of the accessories that come in the production pack, it costs $39,500 USD.

As I previously mentioned there are two different versions of the camera available, one that has an Anton Bauer Gold mount and the other has a V-mount battery plate. With the V-RAPTOR XL 8K VV Production Pack, in addition to the brain you get the following: