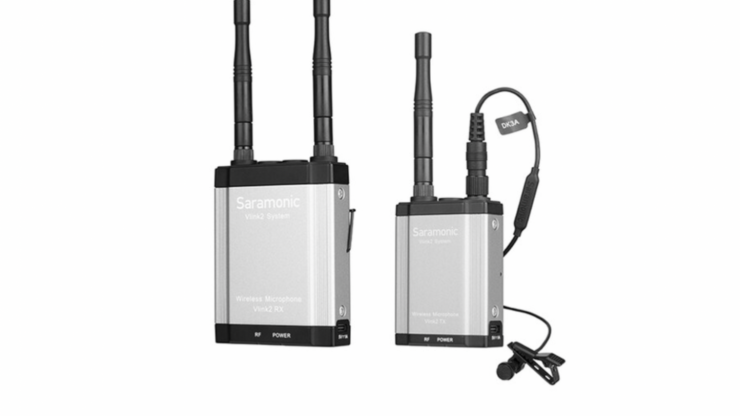 The Saramonic Vlink2 Kit1 Camera-Mount Wireless Omni Lavalier Microphone System with Talkback (2.4 GHz) is an easy-to-use, flexible two-way digital solution for hands-free reporting, presentations, and demos. The two-way design allows a user to stay with the receiver behind the camera and communicate with the talent at the transmitter.

How the talk back works is that you can attach compatible TRS/TRRS headphones to the Vlink2 TX and RX. This allows the camera operator and the talent to communicate with each other. Only the sound from the transmitter gets recorded. This would be useful for live demonstrations, lectures, and events where the talent needs to communicate with the operator.

The system includes a bodypack transmitter with a lavalier mic that plugs into the 3.5mm input jack. The second 3.5mm jack is for monitoring using the TRS or TRRS headphone of your choice (available separately). The two-channel receiver features a 3.5mm output that you can connect to a mirrorless hybrid or audio recorder using the supplied TRS cable. For mobile devices, a TRRS cable is also included. The second 3.5mm jack is for the included headphone with talk-back functionality.

Both the transmitter and receiver run on built-in rechargeable lithium-ion batteries, and they have a claimed run time of up to 19 hours. The system can be powered through its USB-C ports, allowing it to run for numerous hours on a USB-C 5V power bank.

The receiver’s two-channel capability allows you to expand your system by adding an additional transmitter and microphone (available separately) for 2-person interviews without the need for an additional receiver.

The Saramonic Vlink2 TX bodypack transmitter features an OLED display, a detachable antenna, and a built-in rechargeable battery. With a locking 3.5mm microphone input jack and a standard 3.5mm headphone jack, it can accept audio from the included omnidirectional lavalier microphone and supports efficient two-way communication with the receiver. A short press of the power button mutes the mic between takes.

The Saramonic Vlink2 RX is a dual-channel 2.4 GHz wireless receiver. It also features an OLED display and it has a talkback function. The two detachable antennas can be rotated 360°. The receiver’s output can be toggled between mono and stereo modes. The 3.5mm headphone jack can be used for traditional monitoring or monitoring with talkback to the transmitter, and communication can be controlled by a mute button.