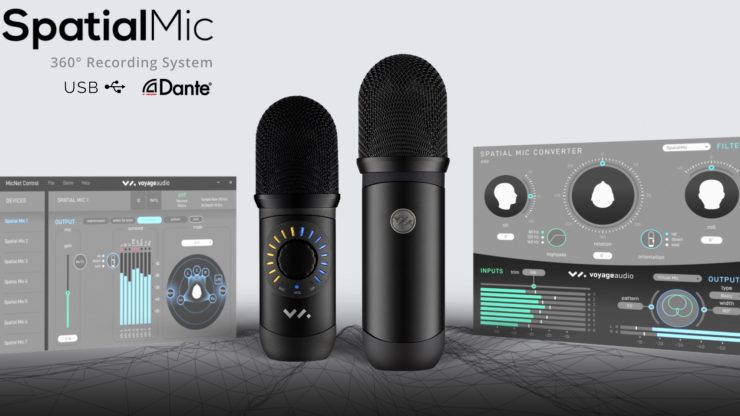 The Voyage Audio Spatial Mic Kit is a professional second-order ambisonics VR microphone capable of single-wire connectivity to your Dante network. It employs an array of eight 14mm condenser capsules to record in 360°, allowing the sound your viewers hear to change as they move and look around in a Virtual Reality or 360° video.

The mic works in tandem with two powerful apps (free downloads available separately). Used in postproduction, the Spatial Mic Converter DAW plug-in (VST, AAX, MacOS X, and Windows 10) transforms the raw capsule output to first- or second-order Ambisonics in AmbiX or Fuma formats, offering the capability to change the microphone’s aim to the point in space where the audio was initially recorded. The Spatial Mic Control app allows for remote operation of all hardware controls and more (MacOS X and Windows 10).

The microphone is light, compact, and durable, and it features high-quality aluminum and nylon construction. The Dante connector supplies power over ethernet (PoE). To get you recording right out of the box, the Spatial Mic comes in a kit that includes a metal mini swivel ball head mount and a foam windscreen.

The Voyage Audio Spatial Mic Kit 360-Degree Ambisonics Microphone with Dante Connectivity retails for $2,899 USD and it will start shipping on October 19th, 2022.