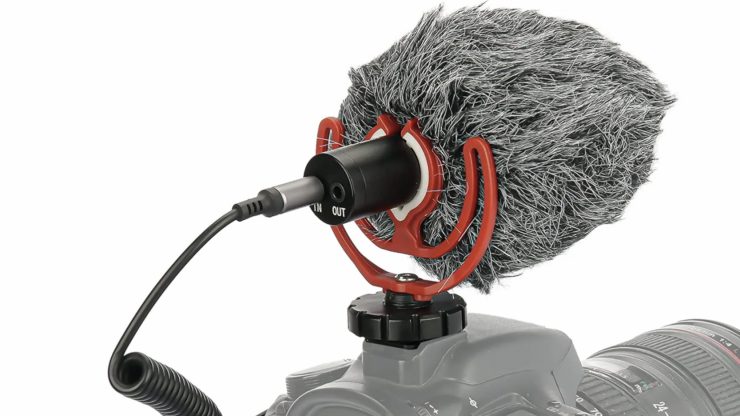 The ANDYCINE M1 PRO is a very affordable, compact, on-camera, super-cardioid polar pattern shotgun microphone. It is being touted as a good option for mobile journalists, Vloggers, and anyone working in fast-paced environments.

The M1 Pro runs on plug-in power and has no controls or switches. This may sound a little odd, but given its intended audience, it was done of purpose so users didn’t have to do anything more than just plug it in. The mic features a 3.5mm output jack, a TRS cable to connect to your camera, and a TRRS cable for smartphones.

The 3.5mm input jack lets you plug in a second audio source, such as a lavalier microphone, and record both sources to your camera or smartphone at the same time on separate audio channels.

The shotgun microphone features a detachable shockmount so you can attach it directly to your camera. The mount is claimed to reduce noise from vibrations and camera handling.

The M1 Pro weighs just 1.6oz / 45.36g which makes it suitable for use on small-sized mirrorless hybrids. You don’t need any batteries to use the M1 Pro. You can simply connect the microphone to your camera or recorder, and enable plug-in power on the device.

The M1 Pro includes a foam windshield and a furry windscreen for outdoor use.

The ANDYCINE M1 PRO retails for $31.99 USD. This makes it very affordable and if you need a spare on-camera microphone in case one breaks, or if you just need a simple solution for a small mirrorless hybrid it is probably a decent enough option.