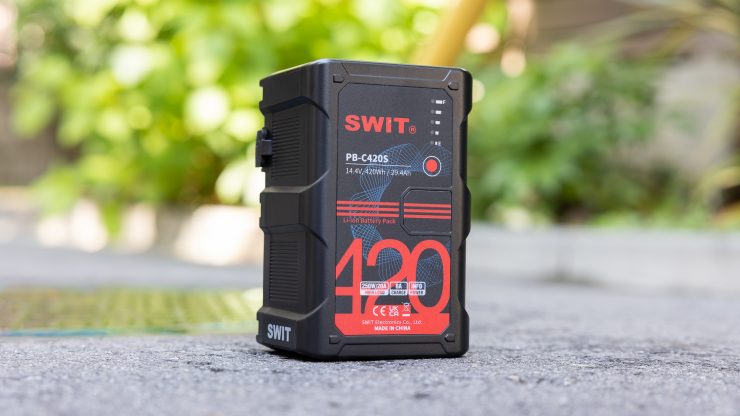 Swit recently released the PB-C420S which they state is the largest capacity battery V-lock battery available today. The PB-C420S is a 420Wh 14.4V, 29.1Ah battery that can supply a constant power load of 250W/20A, and a peak load of 305W. The battery is made up of 24 individual Li-ion cells.

With more and more devices coming out that draw large amounts of power, higher capacity batteries are needed. Yes, there will be some cameras and devices that will use ARRI’s new open standard B-mount batteries, but there is still a need out there for high capacity 14.4V V-mount and AB Gold mount batteries. That’s where the PB-C420S comes in.

The largest capacity 14.4V V-mount batteries that I am aware of top out around 300Wh, so 420Wh is a massive step up.

If you are running high-powered LED lights or large cameras with high power draws then batteries with a big capacity like this do make sense. With a peak load of 305W, a pair of Swit PC-C420S batteries will be able to power a 600-watt light at full power.

It was great to be able to pop the battery on my AMIRA and then not have to worry about changing batteries for hours and hours. A battery like this is also great if you need to continually roll for long periods of time.

Swit states the PB-C420S outputs at least 250W/20A high load even at 1% capacity (Peak load up to 305W), which allows it to drive high-power Cine cameras and on-camera devices together. The high load cells will also ensure better battery life when compared to normal load batteries. The new battery features over-current protection of 24A.

What you clearly need to know when it comes to high-capacity batteries like this is that even though it is 420Wh in capacity it can’t deliver 420W of power. People may just assume that if you take two 420Wh batteries you could power an 840W power draw device, but that is not the case.

With high-powered lights, you still won’t be able to use two SWIT PB-C420S batteries to power fixtures like the Aputure LS 600d/600b/600c Pro or Nanlight Forza 720d/720b at full output. If you want to run the Aputure LS 600c Pro at full output remotely then you will need to use 26V 18A batteries. 14.4V 15A or 26V 8.5A batteries will only allow you to run the light at 50% output, regardless of their capacity.

Now, even with a light such as the Prolycht Orion 300 FS you can’t use a single SWIT PB-C420S battery to power the light because that light requires a sustained 320W to operate. I had to place an additional battery on the power supply/controller before it would turn on.

High power draw lights are difficult to run remotely and lighting manufacturers, at least in my opinion, should spend more time clearly explaining the limitations when running lights via batteries.

If you are working in broadcast, batteries like the SWIT PB-C420S make a ton of sense, especially if you need to power 1×1 or 2×1 panel lights that are often used by news crews in the field. If you are doing lots of live crosses then having a high-capacity battery that can power your lights for many hours is something that will be very appealing.

The PB-C420S features two 150W/10A D-tap outputs and it has a five-level power bar indicator. Having this type of output available through a D-tap is impressive and it allows you to run lights and other devices that may not have a battery plate as long as you have the correct cable.

I would have liked to have seen SWIT include a USB-C power output on the battery as I personally think that every battery should have one. Being able to power a laptop remotely in the field for a long period of time via a camera battery can be very useful.

The Caveat with high capacity batteries

The biggest caveat with high-capacity batteries you can’t travel with them on a plane. Most airlines limit the max capacity to 160Wh, and even then you are only allowed to carry two batteries between 100-160Wh.

Size and weight can also be another caveat, but that really depends on you use case scenario.

Will the PB-C420S be available in other mounts?

The new PB-C420S is currently only available in V-Lock. It is still unclear whether Swit will release the new battery in other mounts such as B and Gold Mount.

The SWIT PB-C420S is in some regards, a niche product, and it isn’t going to be a product that is suitable for a lot of people. It has really been designed as a good alternative to running multiple smaller capacity batteries on high-power draw digital cinema cameras. Yes, it will power a lot of lights out there on the market, but with high power draw lights there are always caveats that you clearly need to know about. You need to do your research to see what the requirements are for powering high-draw lighting fixtures via batteries and not just assume something will work.

I like that I can power my cameras for long periods of time without having to worry about swapping over batteries and that I could also power 1×1 and 2×1 panel fixtures remotely for extended periods of time.

The battery is very competively priced given its high capacity.