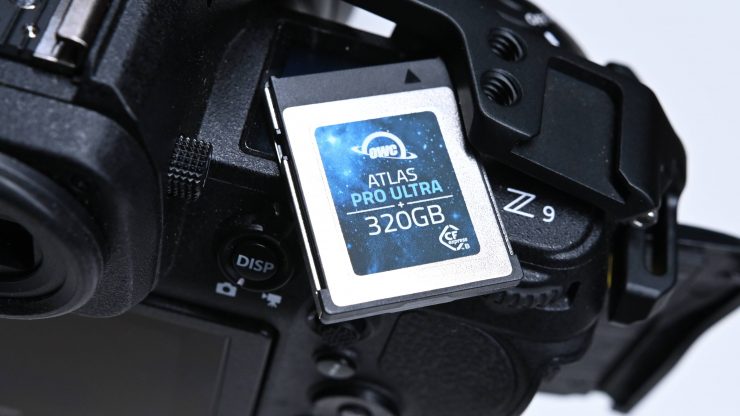 The OWC Atlas Pro and Atlas Pro Ultra are some of the newest CFexpressType B Cards on the market. They come in a range of capacities and the Atlas Pro Ultra looks to be a good option for users of cameras such as the Canon R5C, Canon R5, Canon R3, Canon C500 Mark II, Canon C300 Mark III, Panasonic GH6, Nikon Z9, and the DJI Ronin 4D.

CFexpress cards have been around for a few years now and we are finally starting to see increased capacities and a drop in prices. With more and more cameras now using CFexpress Type B, this was bound to happen.

What you clearly need to know with most types of media is that they aren’t all created equal. Different cards have varying degrees of performance and often card manufacturers won’t quote minimum sustained speeds, instead, they quote maximum possible read and write speeds. This can make choosing the right card confusing.

For this review, I will be looking at the 512GB OWC Atlas Pro and 320GB Atlas Pro Ultra cards.

So what is the difference between the two cards?

While there is no reason that the Atlas Ultra Pro cards shouldn’t work with the RED V-RAPTOr, it isn’t listed as one of the compatible cameras.

With the design of the PCIe Gen3 interface, the fastest cards can provide speeds of up to around 1800 MB/s read and 1800 MB/s write, which is over 3 times faster than the best CFast 2.0 and XQD cards. This has made CFexpress Type B cards very popular with camera manufacturers because they are a good option for recording high resolution, high bitrate material.

These speeds mean that both versions of the card should easily be able to handle anything you can throw at them from any camera that is on the market that uses CFexpress Type B media.

So how do these speeds compare to some other 1TB cards on the market?

OWC claims that the new cards utilize the latest flash storage technologies to provide leading-edge performance, durability, and reliability. They also fully meet the CFexpress Type B 1.0 and 2.0 specifications, and additionally, they are impact, bend, shock, UV ray, and x-ray resistant.

So when I mounted the OWC Atlas Pro 512GB card it shows the actual capacity as being 511.91TB.

When I mounted the OWC Atlas Pro Ultra 320GB card it shows the actual capacity as being 319.87TB.

Given the RED Mini Mag controversy, it is good to know that you are getting what is being advertised. However, with some memory cards and media, companies reserve more space for buffer cleaning purposes which offers more stable writing performance.

Above you can see the only two cards that are certified for use with the V-Raptor. Even though the OWC Atlas Ultra Pro looks like it could easily be used with the RED V-RAPTOR it hasn’t been approved or certified by RED.

In contrast, the Canon R5/R5C only needs a card that is capable of sustaining 400MB/s to record 8K RAW.

If you are using a CFexpress card and transferring to an HDD drive, you won’t be getting fast transfer speeds. If you are transferring to a very fast SSD then you will see lightning-fast offload speeds, but this will also depend on the speed of your card reader.

I did a few tests to see what the sustained read/write speeds of the OWC Atlas Pro and Atlas Pro Ultra CFexpress cards were.

For the sustained read/write speeds I was using a Wise CFexpress USB-C card reader that has a maximum read speed of 1000 MB/s. Here lies the problem. At the moment it is very hard to get hold of a CFexpress Type B Thunderbolt 3 card reader, which means that my tests are limited by the card reader I am using.

Above you can see the results for the OWC Atlas Pro 512GB card with the stress set to 5GB.

Above you can see the results for the OWC Atlas Pro Ultra 320GB card with the stress set to 5GB. As you can see, there is a big difference between the sustained read speeds of the Atlas Pro and Ultra Pro.

As a comparison, let’s have a look at those same results for the Exascend Archon 1TB card with the stress set to 5GB.

As another comparison, above you can see the read/write speeds for the Wise Advanced 1TB CFX-B Series card.

I also tested the OWC Atlas Pro Ultra 320GB card using the AJA System Test Lite software under a 64GB load to see what the read and write speeds were. The write speeds were reasonably consistent, however, there were a few dropouts. These were excellent results and right up there with the best CFexpress cards I have tested to date.

Above you can see that same test using the Exascend Archon 1TB under a 64GB load. The write speeds are super consistent. Look at how stable the green line is.

Above you can see the exact same test for the OWC Atlas Pro 512GB card.

As a comparison, above you can see the same test using the very affordable PERGEAR 1TB CFE-B Pro card.

I also did another test to see how many frames per second the OWC Atlas Pro Ultra card could handle recording 4K DCI ProRes 422HQ. As you can see it could sustain recording 210fps in 4K DCI ProRes 422 HQ. This is an impressive result.

As a comparison, above is the same exact test for the Exascend Archon 1TB. As you can see the results are fairly similar, but the Exascend is much more consistent with far fewer dropped frames.

Above you can see the same test using the PERGEAR 1TB CFE-B Pro card.

I tested the OWC Atlas Pro Ultra 320GB out with the Nikon Z9 and set the camera to record 8K 60p N-RAW. The Z9 when recording 8K 60p in N-RAW (High Quality setting) requires a card with a sustained data rate of up to 750 MB/s.

I was able to record 8K 60p N-RAW in the High quality setting without encountering any problems. This didn’t come as any big surprise as the performance of the card far exceeds the requirements for recording 8K 60p N-RAW.

The OWC Atlas Pro and Atlas Pro Ultra cards have been priced very competitively. Below are the prices for the various capacities:

Firstly, let’s look at how the OWC Atlas Pro 1TB card compares to the competition.

*Currently on sale as of the date of this review

As you can see, prices vary quite dramatically, but so does the performance.

Let’s now look at how the OWC Atlas Pro Ultra 640GB card compares to the competition. There is only one other card with a 640GB capacity, but I have also included 512GB options as well.

At the end of the day, you want to pick a card that can comfortably meet the requirements of what you need to shoot.

The OWC Atlas Pro and Atlas Pro Ultra cards are very solid offerings. The performance of the Atlas Pro Ultra was especially good, and it certainly holds its own against the best cards currently on the market.

The Atlas Pro Ultra in particular performed very well in my tests and the sustained read and write performance is very impressive. With some cards, you really do pay for what you get.

If you are using CFexpress Type B cards with some of the latest cameras that can record 8K RAW then having a reliable and fast card is a must. Not all cards are created equal, and you really do need to do your research carefully and make an informed decision that is right for you.