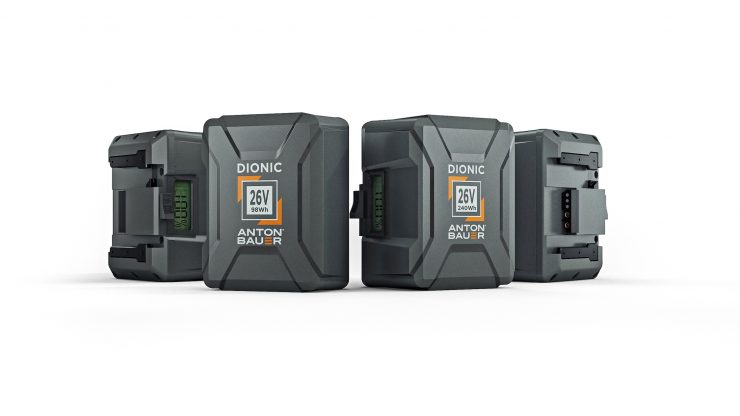 Anton/Bauer has announced its new DIONIC 26V series of B-Mount batteries, chargers, and camera plates have been developed in cooperation with ARRI.

The DIONIC native 26V range includes 98Wh and 240Wh batteries and quad chargers in B-Mount or Gold-Mount Plus options, plus a range of mounting plates.

The DIONIC 26V B-Mount series was designed specifically to power high-power draw cameras such as the new ARRI Alexa 35. DIONIC 26V batteries can also be used as a hot-swappable backup power solution for gear running from large power sources, such as VCLX block-style batteries, eliminating the need to power down a camera to change the main power source.

The casing of the DIONIC 26V B-Mount batteries is made out of an ultra-high-strength polycarbonate blend. This protects the battery cells against extreme heat, humidity, and cold.

There are two methods to get 26 volts from a battery, regulated and native. Anton/Bauer chose native as it balances cell usage and requires fewer circuit boards packed on top of the cells which significantly reduces heat. According to Anton/Bauer, this allows the batteries to have many more charge cycles in their lifetime than regulated or dual-voltage batteries.

The 26V Gold Mount Plus Bracket (ARRI Alexa 35) allows you to power the ARRI Alexa 35 with Dionic 26V batteries. The bracket replaces the B-Mount plate and connects directly to the back of the Alexa 35, eliminating the need for extra cables. You can run the 90-Watt ARRI Alexa 35 for around 2.8 hours with a Dionic 26V 240Wh battery. A Dionic 26V 98Wh battery will run the camera for around 1.1 hours on a single battery.

The Anton/Bauer 26V B-Mount range is now available to pre-order. Below are the prices: